In theory, Paul Collins can do his entire job in 50 seconds. In reality, he has no choice.

That’s how much time he has to work on the car suspended above him, before the next one takes its place — and he has to keep up that pace all day long. But lately he’s had some help from what’s best described as a “bionic vest.”

Collins has been on the moving assembly line at Ford’s Michigan plant for almost 24 years.

“It affected my life,” Collins says. “My wife would say, ‘honey, let’s go do something’ … and she’d see me walk in the door and knew I was gonna tell her no. I was just too tired to do anything.”

His job requires him to make very small changes to the vehicles that rumble by — a tweak here, a twist there. But being on the “high line,” as it’s called, means he is constantly raising and lowering his arms as he works on cars overhead.

Workers on the ‘high line’ typically have to raise and lower their arms thousands of times every shift, sometimes holding heavy tools. (Rebecca Cook/Reuters)

Whether it’s to push in a fastener or snap a fuel line into place, a worker on the line will raise and lower their arms thousands of times in a single 10-hour shift.

Try doing that five days a week, year-round, for decades.

“I was going home at night, flopping down on the couch, and I was Icy-Hotting my neck every single night,” Collins says. “It’s hard to explain pain, but you’re tired, you’re exhausted, you’re fatigued.”

The human shoulder is a wonderfully versatile and flexible joint — but it’s also one of the weaker ones, and prone to injury. 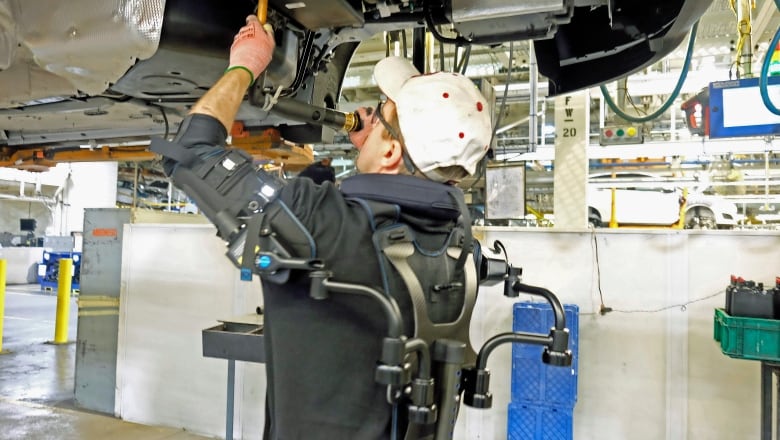 The eksoVest is completely mechanical, with specially engineered springs that provide variable levels of lift depending on how high the person raises their arms. (Michael Drapack/CBC)

When workers get injured, it can have a huge impact on their lives and they need time to heal. And it’s also a big issue for their employers.

“The problem with the shoulder is once it’s injured, it takes a long time to return to full functionality and it’s very costly,” says Marty Smets, the engineer at Ford who’s taken charge of a pilot program to reduce workplace injuries.

You might, at this point, ask: why do we still build cars by hand?

Humans, after all, have already largely been replaced in many factory jobs. Painting, for example, can be done almost entirely by machine. 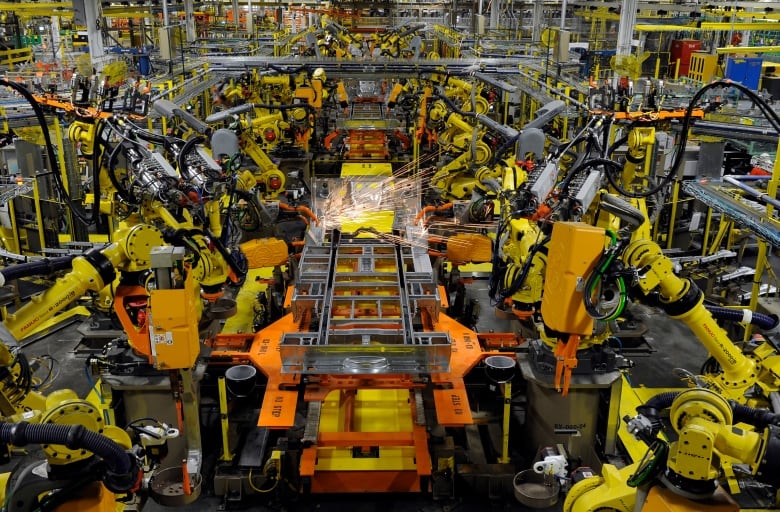 Robotic arms spot-weld the chassis components of Ford vans at the Claycomo plant in Missouri. While machines are fast and efficient at straightforward jobs, there are many tasks in modern factories that are still better suited to people who can react to variables. (Dave Kaup/Reuters)

But jobs like those are exceptions to the rule; building vehicles is still very much a human-powered endeavour. In a complex work environment like a moving assembly line, machines notably lack intelligence, adaptability, and even precision.

So, Ford asked itself a question: if we can’t yet give machines human-like intelligence, can we give humans machine-like stamina?

“Augmenting a human provides the best of both worlds,” Smets says.

Ford has been offering a small number of its workers bionic vests for almost a year now as part of a pilot program.

The company makes it clear from the start: it’s completely optional, and if employees don’t want to wear one, they’ll never have to. The union, for its part, has worked hard to get that in writing.

But you can see why a person might be curious.

The eksoVest, designed by Richmond, Calif.-based Ekso Bionics, doesn’t give the wearer super-human strength. But giving each arm an additional 10 to 15 pounds of lift is enough to make a person’s arms feel weightless — so all of a sudden, the prospect of working overhead all day isn’t so tiring or hard on the body.

What also sets the vest apart is that it’s completely mechanical. There’s no cord, no battery, no electricity; it’s powered by springs. They kick in gradually once the wearer raises their arms to about chest-height and beyond. 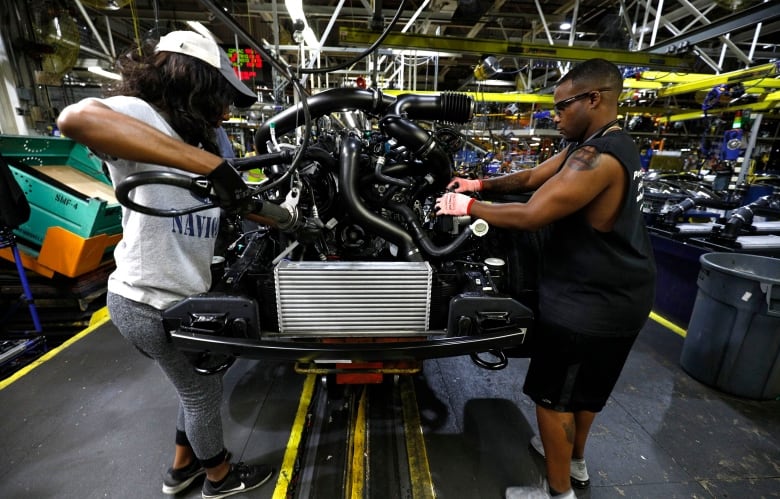 In a complex work environment like a moving assembly line, machines are good at repetitive tasks and don’t get tired, but they lack the intelligence and adaptability that a human brings to the job. (Bill Pugliano/Getty Images)

It takes a veteran user about 45 seconds to strap in. Once fully adjusted, the vest doesn’t feel much different than wearing a climbing harness.

Paul Collins — “Woody” to his friends — remembers the first day he put it on.

“I’ve heard RoboWoody, RoboCop, I’ve heard Rocket Man,” Collins says. “When I first had that thing on, they had a field day — you can imagine guys in the plant.

“[But] I’m not using any of my muscles at all — the vest is holding my arms — so instead of me exerting energy, the vest is doing that, taking all the pressure off my shoulder.”

So how does he feel after a full day of working with the vest on?

“Aw, I feel fine. My neck — instead of having to Icy Hot it down three or four times like I told you earlier, I feel fine at the end of the day.”

But whether the company will save more than that in workers’ compensation claims and health care costs is still an open question.

All of Ford’s early data is quite deliberately anecdotal — after all, if workers don’t like wearing it, the impact on the company’s bottom line may not matter; a union uprising is in nobody’s best interest. 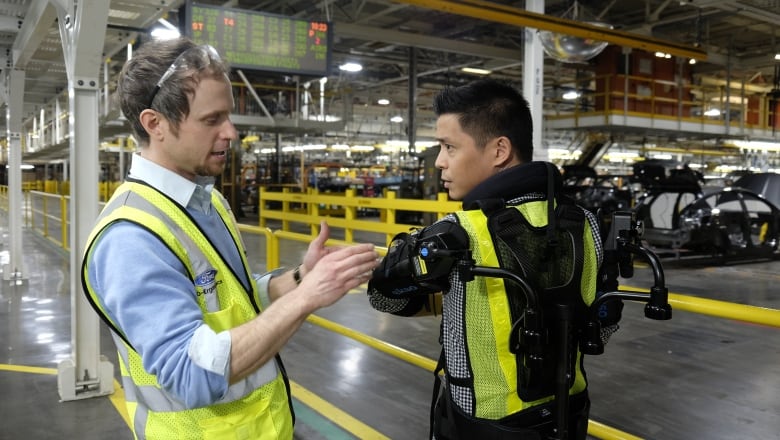 Marty Smets, left, an engineer at Ford who’s taken charge of a pilot program to reduce workplace injuries, shows CBC’s Andrew Chang how to put on an eksoVest at the company’s Michigan Assembly Plant. (Michael Drapack/CBC)

“If anyone knew Ford workers,” Collins says, “anything Ford wants us to do, usually we don’t wanna do it.”

But so far, the feedback has been positive. Collins, for example, doesn’t want to give his trial vest back.

So Ford is now considering moving onto Phase 2, collecting actual empirical evidence that the vests are worth the cost. That means more trials on more people.

And according to Smets, there’s no shortage of potential testers. Workers in Ford plants around the world — including from the company’s assembly plant in Oakville, Ont. — have expressed interest.

And while this vest only provides lift assistance for a very specific range of motion — arms over your head, and not, for example, picking up something off the ground — the vest’s manufacturer is already looking into ways to adapt the technology to other parts of the assembly line.

CBC’s Andrew Chang puts on a ‘bionic’ eksoVest, which Ford is trying out at its factory in Michigan to see if it reduces fatigue and injuries among people who have to spend much of their shifts working on vehicles passing overhead. 1:22

The company has also developed similar suits for use in construction, and in physical rehabilitation.

But as for when we can expect exoskeletons to give us the super-strength required to lift entire cars overhead: don’t hold your breath, says Haas.

“That’s certainly more than five years away,” he says. “More than 10, probably, to be able to lift your own body weight with minimal effort. More than 20 until we see real application in a plant.”