The prosthesis reflects 20 years of technological progress. The microprocessor powering it instantly analyzes and responds as the user shifts their weight.

During Aubé’s second deployment in 2009 near Kandahar City in Afghanistan, he hit an improvised explosive device.

Aubé was 28 at the time with a wife and a young son and daughter. Doctors told him only five per cent of people with his type of trauma to the leg are able to walk.

Etienne Aubé’s prosthesis calculates the speed of his weight transfer, offering a good base for the fluid movements of golf. (Invictus Games Toronto 2017)

“I was conscious [during] all the travel to the hospital in Kandahar, and I was talking to myself in the helicopter. And I said, ‘We’ll see now if you’re a real man, because your real combat begins now.'”

Aubé said that “everyone took the bomb with me.” Over the course of three surgical amputations, his family grew closer.

Surgeons removed the kneecap and tibia of his right leg. The prosthesis fits into a silicone sleeve on the leg.

Changing his mindset about his recovery, he became passionate about progressing on the golf course. The quiet greens complemented his rehabilitation with both physical and psychological boosts.

The military paid for Aubé’s eight-kilogram prosthetic device. The Ottobock X3 is a sophisticated, $100,000 model with a micro-processor aboard. Gyroscopes help situate it and calculate the speed of weight transfer between Aubé’s legs, allowing for fluid movements.

“It’s updated instantly, something like 300-400 times a second,” said Shane Glasford, a certified prosthetist at the Sunnybrook Centre for Independent Living in Toronto. 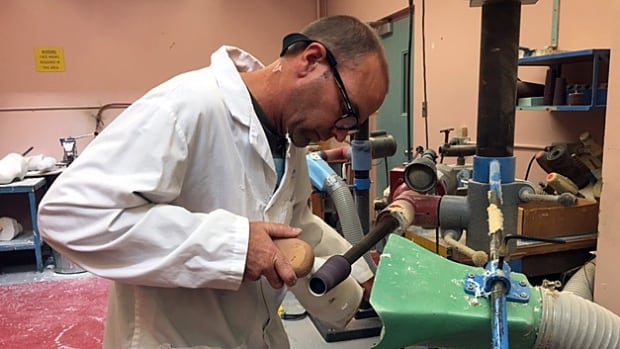 Paul Russell shapes a foam cover that will go over a leg at Sunnybrook’s prosthetic lab. (Marcy Cuttler/CBC)

The majority of cases are geriatric, Glasford said. Diabetes and peripheral vascular disease are the main reasons for amputation. Trauma from motorcycle accidents and diseases such as cancer, including Terry Fox’s malignancy, also come into play. A small subset  are children who were born without limbs.

Beyond rehabilitation, there are other daily challenges for people wearing a prosthesis. Glasford said they commonly perspire a lot, because loss of skin or scarring also reduces the temperature-regulating properties of the skin.

For some, cosmetic concerns are top of mind. Others are pleased with as futuristic a look as possible.

“For an above-the-knee amputee, you’re looking at 60 to 70 per cent more energy just to do the basic, everyday things,” Glasford said.

While our knees are wired internally with nerves and muscles that allow movements without conscious thought, Glasford said a new amputee has to think about taking a step and keeping their weight in the correct place. 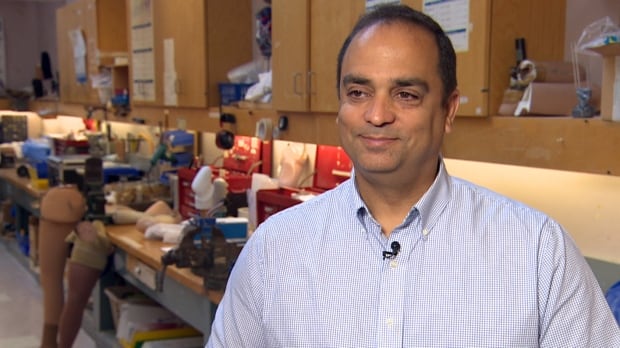 Shane Glasford says microprocessor knees will lock up valves to prevent falls when walking on even surfaces. (CBC)

For bilateral amputees, standing can be difficult, just as trying to stay still on a bicycle on two wheels isn’t as easy as moving forward.

When someone wears a standard prosthesis, walking on uneven pebbles will cause the knee to buckle, which can lead to a fall.

“The microprocessor knees will recognize that’s happening,” Glasford said. “It will lock those valves up and catch the amputee on the way down, just hopefully enough to get their second foot down to break the fall.”

Glasford said military prostheses, for instance, are designed for a soldier in the field who needs to carry an injured buddy. The demanding conditions mean the microprocessors in the prostheses are built to withstand mud and moisture.

He looks forward to the next generation of devices with “forced feedback.” It gives users a sense of grip and whether they’re touching something smooth or rough, hot or cold.

For upper-extremity amputees, Glasford said, replicating the range of functions of a hand is almost impossible. The hospital generally offers a variety of devices, such as a clamp, vise grip or hammer.

Glasford called it rewarding to work with those at the top of their game, such as athletes and accomplished musicians. They may come back countless times for minute adjustments that others wouldn’t notice.

Often the biggest challenge, Glasford said, is trusting the device and its microprocessor to put weight on it.

Aubé said he doesn’t feel anything as the scope adjusts. “That’s why sometimes downhill or in stairs, I have to watch my feet.”