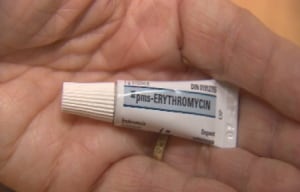 Canadian pediatricians are calling for changes to what they consider an ineffective medical treatment for newborn babies: antibiotic eye drops to prevent sexually transmitted infections from mothers.

Health-care professionals use the eye drops to prevent babies from getting neonatal opthalmia — or conjunctivitis (pink eye) that happens in the first four weeks of life — from gonorrhea or chlamydia. The treatment is required by law in Ontario, British Columbia, Prince Edward Island, Alberta and Quebec.

The Canadian Pediatric Society is urging doctors to advocate for the repeal of such laws because the treatment is “of questionable efficacy.”

It’s among a number of recommendations the organization laid out in a recently published position statement on its website.

“The health-care professional’s caught in the middle of this. They don’t actually think this is a good idea to do because it doesn’t work, but the law says they have to do it,” said Dr. Noni MacDonald, lead author of the organization’s position statement.

‘Patients should be able to consent to interventions that they are receiving.’- Liz Darling, midwife

The practice first began in the 1880s, when a German doctor put silver nitrate in babies’ eyes to prevent gonorrhea from causing corneal infections and turning babies blind. It was a huge step forward at the time, before health professionals had antibiotics to treat infections.

Silver nitrate is no longer used (it actually caused transient toxic pink eye in 50 to 90 per cent of newborns) in favour of erythromycin — now the only available treatment in Canada.

“The problem is at least a quarter to 30 per cent of the gonorrhea we have in Canada is resistant to erythromycin, so it probably doesn’t work. And that was really the spur to redo this whole statement and we think things need to change,” said MacDonald.

Erythromycin eye drops are currently the only treatment in Canada for neonatal ophthalmia, which is an eye infection in newborn babies. (CBC)

Babies who are born to moms who have untreated chlamydia at the time of delivery have a 50 per cent risk of getting the infection.

But MacDonald said the eye drops “are not effective against chlamydia — the most common sexually transmitted infection we see in Canada.”

Rather than eye drops, the organization said it prefers routine prenatal screening and treatment during pregnancy to prevent newborns from getting eye infections from chlamydia.

The statement notes that laws requiring antibiotic eye drops for newborns were abandoned in several high-income countries decades ago, including Denmark, Norway, Sweden and the United Kingdom.

In Canada, of the five provinces where the antibiotic eye drops treatment are legislated, only British Columbia allows parents to waive the treatment with a written request.

Liz Darling, a midwife, is concerned by the lack of choice elsewhere.

“This is an intervention that’s actually a very strange exception to one of the very basic principles that we have in health -care, which is that patients should be able to consent to interventions that they are receiving,” she said.

She said it’s an awkward situation for parents, who have no space within the law to decline the treatment.

“This is one case where, when I talk about the evidence and how effective this is and how necessary it might be and what the benefits are, for most people it is pretty obvious that it is not really something they would want to do,” said Darling.

“Most parents are usually pretty responsive to us describing the fact that at this point in time, it is something we can’t offer the choice that we normally would. I do explain that if a baby doesn’t get [the antibiotic eye drop treatment], then essentially, it means we are breaking the law in that situation so most people are sort of willing to say, ‘OK well, I guess I will do it then.'”

In addition to governments rescinding the law, the Canadian Pediatric Society recommends health-care professionals provide preventative measures such as gonorrhea and chlamydia screening for all pregnant women at the first prenatal visit, and further screening and treatment if necessary for the pregnant woman — and even her partner — throughout pregnancy.