Ahead of the talks, there were sharp swings in global financial markets, with the Dow Jones dropping more than 400 points on Tuesday after Trump issued a threat via Twitter that he would hike tariffs on $200 billion worth of Chinese goods to 25 per cent from 10 per cent — which he did on Wednesday. He also threatened more to come “shortly.”

Beijing has promised to respond “in kind.” And consumers around the world, including in Canada, should expect to pay more for goods the longer the ongoing trade war lasts.

All of which is making for an unpredictable negotiation over the next two days.

Here’s what to know about the U.S.-China trade war.

How did it begin?

The president has for years grumbled about the “trade deficit” between the U.S. and China. That’s an economic measure of the gap between how much a country exports and how much it imports.

In January 2018 he threw out the first salvo when he imposed tariffs on imports of solar panels. That led to a series of tit-for-tat retaliatory tariffs before the two countries agreed on a three-month truce. That grace period ended on March 1.

For 10 months, China has been paying Tariffs to the USA of 25% on 50 Billion Dollars of High Tech, and 10% on 200 Billion Dollars of other goods. These payments are partially responsible for our great economic results. The 10% will go up to 25% on Friday. 325 Billions Dollars….

“I don’t think the tariffs themselves are the solution to the imbalance,” said Suisheng Zhao, director of the Center for China-U.S. Co-operation at the University of Denver. “That’s why we’re seeing the negotiations. There are many other factors that produced the imbalance.”

Last year, the U.S.-China trade deficit was $419.2 billion, according to U.S. Commerce Department statistics, up from a record deficit of about $375.5 billion in 2017.

That’s an increase of nearly 12 per cent in spite of the tariffs on China.

Is the trade deficit cause for concern?

The prevailing wisdom is: not really. Many economists argue trade deficits aren’t necessarily a bad thing for jobs or even a sign of weakness.

As Harvard economist N. Gregory Mankiw explained in the New York Times, the act of dining out with his family at a restaurant could be interpreted as his family running a trade deficit with that restaurant. “But it doesn’t make us losers. After all, we leave with full stomachs,” he wrote.

“I don’t think the trade deficit is a huge reason to worry,” said Edward Alden, a senior fellow at the Council on Foreign Relations who specializes in U.S. trade policy. And despite Trump’s fixation on the bilateral trade deficit, the trade talks are about something “far more substantive” — like the U.S.’s three core demands to restrict China’s alleged cheating on trade.

What are the sticking points?

First, there’s the international accusation of pervasive theft of intellectual property by the Chinese — from knock-offs of brand name clothing to ideas and trade secrets stolen via cyberattacks.

“This has been going on for 40 years,” said Jim Lewis, a former U.S. Commerce Department official and expert on high-tech trade policy. “In 1996, when I was working with an American aircraft company, the Chinese were going into their plant every night, photographing blueprints and machinery, taking things apart. And when the internet came along, suddenly it was so much easier to steal.”

China has for years been accused of pervasive theft of intellectual property, like knock-offs of brand name clothing and the counterfeit designer purses on display at a shopping mall in Beijing. (Claro Cortes/Reuters)

Another major beef the Americans have with China is over so-called forced technology transfer policies. The rules dictate that foreign companies looking to enter the Chinese marketplace must share proprietary technology if they want to do business.

Lastly, China is subsidizing industries in ways that the U.S. says distorts markets and makes it difficult for foreign firms to compete.

Will China address those issues?

Not according to a Reuters report published Wednesday citing government and private sector sources who said China revised a 150-page draft trade agreement with the U.S., removing all commitments to change laws around intellectual property theft, forced technology transfers, competition policy and more.

U.S. trade officials were reportedly taken aback by the changes.

“This undermines the core architecture of the deal,” one source with knowledge of the talks told the news agency.

Why does this trade war matter?

A global knock-on effect is bound to affect the Canadian economy. Zhao said that if the trade war continues, it will have a negative impact on global GDP growth and disrupt complex global supply chains crucial to American firms’ success.

Investors looking forward to retirement might also have reason to hope the U.S. and China can get a deal done, particularly if they have money in retirement funds such as RRSPs, Alden said.

“Those funds all depend on the performance of markets that are reacting very directly to these trade developments,” he said. “What are things going to cost at Walmart or Canadian Tire? And what’s the effect on the money you’ve socked away for retirement or for educating your kids? Those are the two major pocketbook impacts.”

Who has more leverage?

The Americans appear to have an economic advantage. In relative terms, Zhao says, “China loses more than the U.S.”

“For China, no alternative is as big and lucrative as the American market,” he said. “They heavily rely on the U.S. market, and their economic growth has been turning south.” 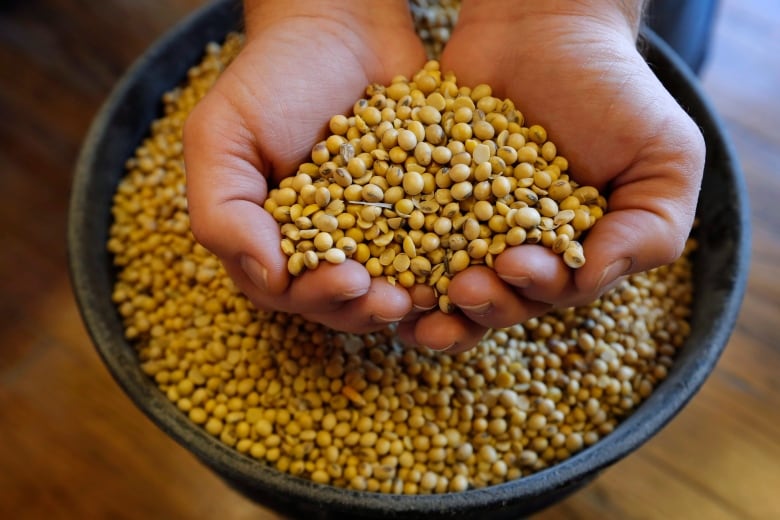 China’s retaliatory tariffs on imports from the U.S. have targeted some Midwestern states and rural regions. U.S. soybean farmers in Iowa, for instance, like have taken a hit since China began cutting imports. (Charlie Neibergall/The Associated Press)

At the same time, U.S. economic growth reported last month exceeded expectations. In this context, Trump’s threats to impose additional tariffs, if carried out, could effectively close the U.S. market to China, landing a big blow to the Asian superpower’s economy.

Even so, there are no true winners in trade wars, Zhao said.

What are the political implications?

Probably none for China. With a democratic dictatorship and single-party rule, there’s more room to make big domestic changes and blame the Americans for domestic woes.

It’s more complicated for the Americans. China’s retaliatory tariffs on imports from the U.S. have targeted some Midwestern states and rural regions Trump needs in order to win re-election in 2020.

U.S. soybean farmers in Iowa, for instance, have taken a hit since China began cutting imports. China was once the biggest buyer for American soybeans; last month, shipments were at their lowest levels in a year.

“People who are damaged by the tariffs have a lot of channels to complain to their representatives,” Zhao said.

China has been vulnerable to raised tariffs, and has great incentive to work something out even as it resists any changes to the fundamental nature of the way its economy runs, said Orville Schell, the Asia Society’s director of the Center on U.S.-China Relations.

He predicts Trump will get “some simulacrum of a trade deal,” or at least enough to make the markets jump for a few days.

“But ultimately it won’t solve anything,” he said. “You might get some semblance of a deal, but it won’t work out.”

A truce that lasts through the 2020 election season is a possibility while negotiations continue. Orville said a resolution that will allow both sides to claim a win might be a best-case scenario for now, but he doesn’t hold out hope China will be convinced to change its trade practices.

“They believe in protecting their national champions, and they’ll shut everybody else out to do it,” he said.