Attacks on Saudi Arabian oil pipelines, facilities and tankers have ratcheted up the tensions between age-old antagonists Iran and the United States in the Persian Gulf.

In a statement carried by the state-run Saudi Press Agency, Energy Minister Khalid al-Falih said drones attacked a petroleum pumping station supplying a pipeline running from its oil-rich Eastern Province to the Yanbu Port on the Red Sea. State-run Saudi oil company Aramco stopped pumping oil through the pipeline while damage was being assessed and repaired.

The drone attacks come two days after tankers anchored in the Persian Gulf were damaged by what Saudi officials described as sabotage.

Details of the alleged sabotage to two Saudi, one Norwegian and one Emirati oil tanker on Sunday remained unclear, and Gulf officials have declined to say who they suspect of being responsible.

Satellite images obtained by The Associated Press on Tuesday showed no major visible damage to the vessels, but the incidents demonstrate the raised risks for shippers in a region vital to global energy supplies as tensions increase between the U.S. and Iran over its unravelling nuclear deal with world powers.

Brent crude, the world oil benchmark, spiked above $71 US a barrel on Tuesday amid the crisis.

The U.S. has warned sailors of the potential for attacks on commercial sea traffic, and regional allies of the United Arab Emirates condemned the alleged sabotage as the tankers were off the coast of the U.A.E. port city of Fujairah.

A U.S. official in Washington, without offering any evidence, told the AP that an American military team’s initial assessment indicated Iran or Iranian allies used explosives to blow holes in the ships. The official, who was not authorized to discuss the investigation, agreed to reveal the findings only if not quoted by name. The U.S. navy’s 5th Fleet, which patrols the Middle East and operates from a base in Fujairah, has repeatedly declined to comment.

The U.S. already had warned ships that “Iran or its proxies” could be targeting maritime traffic in the region. The U.S. is deploying an aircraft carrier and B-52 bombers to the Persian Gulf to counter alleged, still-unspecified threats from Tehran.

U.S. ally Spain has temporarily pulled out a frigate that was part of a fleet in the area while tensions mount.

The Spanish Ministry of Defence says the Mendez Nunez frigate,with 215 sailors on board, will not cross the Strait of Hormuz into the Gulf together with the fleet headed by the USS Abraham Lincoln aircraft carrier.

The aircraft carrier strike group has been in the area since May 4, along with a group of B-52 bombers, on the orders of the White House after national security adviser John Bolton had warned Iran “that any attack on United States interests or on those of our allies will be met with unrelenting force.”

The Spanish vessel was the only non-American vessel in the fleet, and Spanish media reported the decision was made to avoid having the country being drawn into a conflict between the U.S. and its longtime antagonist Iran.

Citing heightened tensions in the region, the United Nations called on “all concerned parties to exercise restraint for the sake of regional peace, including by ensuring maritime security” and freedom of navigation, UN deputy spokesperson Farhan Haq said. 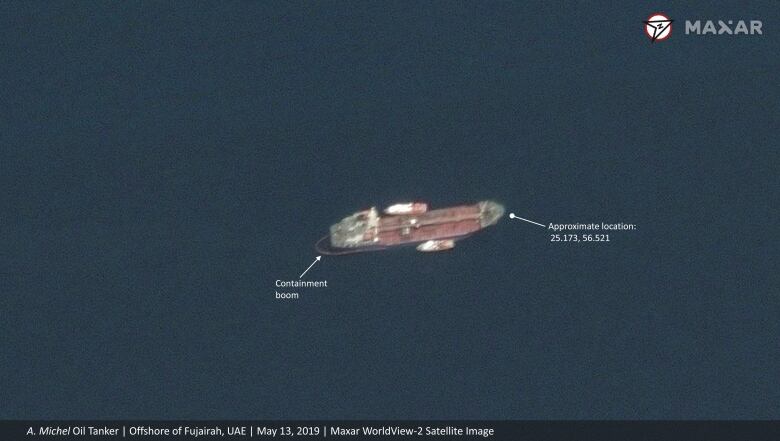 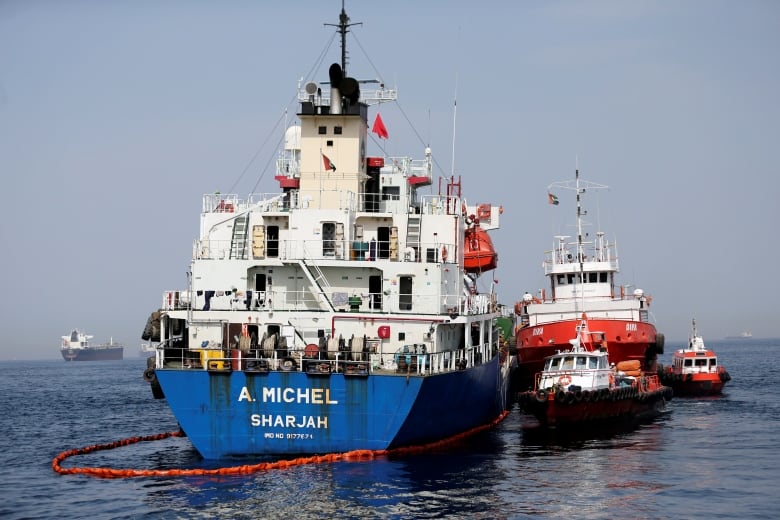 A boom was around the A. Michel, suggesting a possible oil leak. (Satish Kumar/Reuters)

The U.S. official said each ship sustained a 1.5- to three-metre hole in it, near or just below the water line, suspected to have been caused by explosive charges. Emirati officials had requested a team of U.S. military investigators aid them in their probe.

Authorities in Fujairah, also a UAE emirate, also declined to speak to the AP. Emirati officials stopped AP journalists from travelling by boat to see the ships.

The incident raised questions about maritime security in the U.A.E., home to Dubai’s Jebel Ali port, the largest man-made deep-water harbour in the world that is also the U.S. Navy’s busiest port of call outside of America.

Fujairah also is about 140 kilometres south of the Strait of Hormuz, the narrow mouth of the Persian Gulf through which a third of all oil at sea is traded. 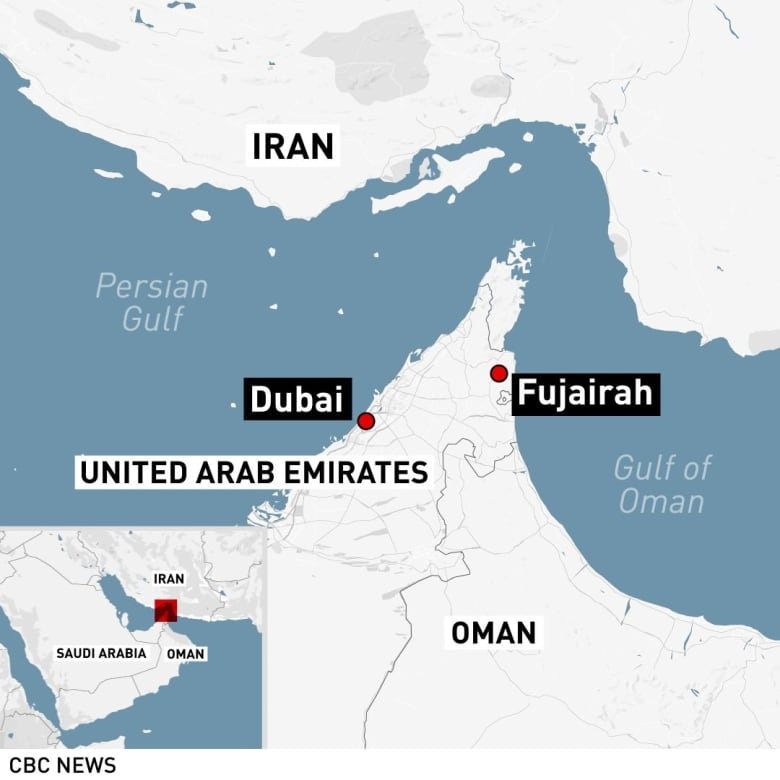 Shortly after the Saudi announcement, Iran’s Foreign Ministry called for further clarification about what exactly happened with the vessels. The ministry’s spokesperson, Abbas Mousavi, was quoted by the official IRNA news agency as saying there should be more information about the incident.

Mousavi also warned against any “conspiracy orchestrated by ill-wishers” and “adventurism by foreigners” to undermine the maritime region’s stability and security. Both the UAE and Saudi Arabia are staunch opponents of Iran’s government.

Asked at the White House about the incident, President Donald Trump responded: “It’s going to be a bad problem for Iran if something happens.” 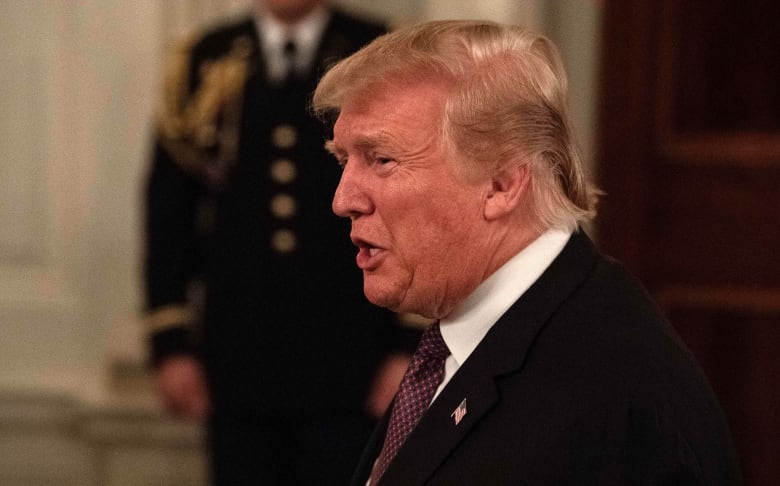 Tensions have been rising between Iran and the U.S. since President Donald Trump pulled out of a 2015 nuclear deal. (Nicholas Kamm/AFP/Getty Images)

Tensions have risen since Trump withdrew America from the 2015 nuclear deal between Iran and world powers, and restored U.S. sanctions that have pushed Iran’s economy into crisis. Last week, Iran warned it would begin enriching uranium at higher levels in 60 days if world powers failed to negotiate new terms for the deal.

European Union officials met Monday in Brussels to thrash out ways to keep the Iran nuclear deal afloat. U.S. Secretary of State Mike Pompeo had travelled there for talks.

“We’re not going to miscalculate. Our aim is not war,” Pompeo told CNBC in an interview. “Our aim is a change in the behaviour of the Iranian leadership.”

Underlining the regional risk, the general-secretary of the six-nation Gulf Cooperation Council described the incident as a “serious escalation.”

“Such irresponsible acts will increase tension and conflicts in the region and expose its peoples to great danger,” Abdullatif bin Rashid al-Zayani said. Bahrain, Egypt and Yemen’s internationally recognized government similarly condemned the alleged sabotage, as did the Arab League.