There will be no global reconstruction funding for Syria until a “credible and irreversible” political process led by the United Nations is underway, a U.S. State Department official said Friday as the United States announced plans to redirect $230 million US in frozen funding away from the civil war-torn country.

U.S. officials said they were able to make the $230 million reduction because they had raised $300 million for recovery efforts in northeastern Syria from other countries, which were part of the coalition battling ISIS militants in the area.

U.S. officials said the $230 million will be spent on other foreign policy priorities.

U.S. President Donald Trump froze the funds in March while his administration reassessed Washington’s role in the Syrian conflict, saying he wanted the U.S. to leave Syria.

U.S. officials insisted that Washington’s efforts would be focused on defeating ISIS in Syria.

It named former ambassador to Iraq, Jim Jeffrey, to a new position as U.S. Secretary of State Mike Pompeo’s adviser on Syria. Jeffrey would also oversee talks on a political transition in Syria, including the future of Russia- and Iran-backed President Bashar al-Assad.

Acting U.S. assistant secretary of state David Satterfield said there would be no international funding for Syria’s reconstruction until there was a “credible and irreversible” political process underway to end the Syrian conflict, which has been going on since March 2011.

“There is not going to be, by international agreement, reconstruction assistance to Syria unless the UN — not Moscow, not Washington, not any other capital — validates that a credible and irreversible political process is underway,” Satterfield said on a conference call with the media.

U.S. President Donald Trump froze $230 million US in reconstruction funds for Syria in March while the U.S. reassessed its role in the conflict. (Andrew Harnik/Associated Press)

Both the Russian and Syrian governments want international funding to rebuild Syria, he said.

“It is about unlocking international reconstruction assistance, which Syria is desperately going to need,” McGurk told reporters. “We are remaining in Syria. The focus is on the enduring fight against ISIS,” he added. 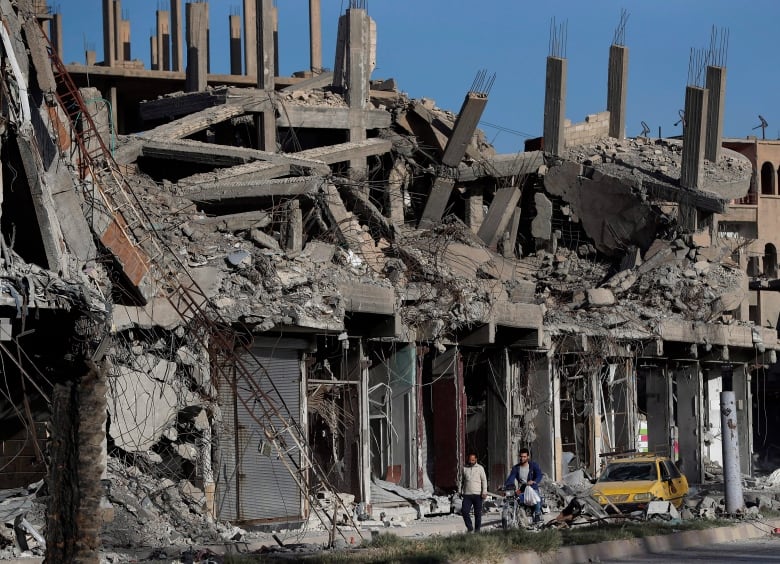 Rubble lines a street that was damaged during fighting between the SDF and ISIS militants in Raqqa. The U.S. says reconstruction assistance for Syria requires an international agreement involving the United Nations. (Associated Press)