Say it with us: Cory and Topanga forever!

It’s been close to 18 years since we were able to watch a brand-new episode of Boy Meets World. But even after all this time, something happens to pop culture fans when the original cast reunites.

Such was the case Friday afternoon when Ben Savage, Danielle Fishel, Rider Strong and Will Friedle traveled to Chicago and attended Wizard World Chicago Comic Con.

While at the festival, the cast couldn’t help but recreate the official cast photo that became iconic for ’90s kids.

“We hate each other,” Danielle joked on Instagram. Rider added, “Still rocking the muppet mouth. #wizardworld.” 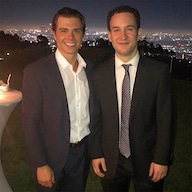 TV Cast Reunions That Made Our Nostalgia-Loving Hearts Swell

This isn’t the first time some of the co-stars from Disney Channel’s hit series have come together over the summer. Just last month, Ben attended Matthew Lawrence and Cheryl Burke‘s engagement party in Los Angeles.

“Congratulations on your engagement @matthewlawrence. So happy for you and @cherylburke,” he shared on Instagram.

For those who missed out on today’s event, there’s still a chance to see the cast again as they participate in a group photo opportunity this weekend.

And while the cast today remains closer than ever, there was one Internet debate that left the gang divided: Where was Mr. Feeny’s house in relation to the Matthews house?

The cast may disagree, but don’t worry: All is well with this Disney crew.