Pro-oilsands activists clashed with opposing groups Friday in Halifax at a rally for the revival of the Energy East pipeline project, which was scrapped by owners TransCanada in 2017.

The pro-oilsands rally, organized by a group called Rally 4 Resources, garnered a crowd of 50 or so at Sackville Landing on the Halifax waterfront, a few minutes walk from where the Conservative Party of Canada is holding its 2018 convention.

The rally was interrupted by a counter-demonstration of dozen or so people drumming, chanting and holding signs that spoke of Energy East violating Indigenous rights and causing climate change.

Some of the pro-oilsands rally’s supporters wore lanyards for the Conservative Party of Canada’s 2018 convention, taking place in Halifax five blocks away. (Kaitlyn Swan/CBC)

Rally organizer Robbie Picard, a Métis business owner from Fort McMurray, Alta., said he flew to Halifax to support the revival of Energy East because he was tired of groups opposed to pipelines using Indigenous rights as a tool to promote their own agendas.

“It’s a shame that people are speaking on behalf of all First Nations … trying to hijack and use them because they don’t want our oil to get to our market,” Picard said in an interview.

“The oilsands, in my opinion, are the best thing to ever happen to First Nations. It’s lifted them from abject poverty.”

Referencing First Nations and Métis groups in Alberta like the Athabascan Chipewyan First Nation and the Athabasca River Métis, who have recently shown interest in pipeline ownership, Picard said the Energy East project could have provided “huge” economic benefits for First Nations in the Eastern and Atlantic regions.

Robin Tress with the Council for Canadians, a non-profit organization that advocates on matters of social and environmental justice, was one of the anti-pipeline activists brandishing signs and a drum. She said the anti-pipeline counter-demonstration came together quickly.

“This was mostly just a groundswell of people that have been opposing Energy East for years,” she said.

“Energy East was cancelled after years of sustained opposition by Indigenous and non-Indigenous people who wanted to protect their land, their water, in some cases their treaty rights …. We don’t want to see it back in the political arena.” 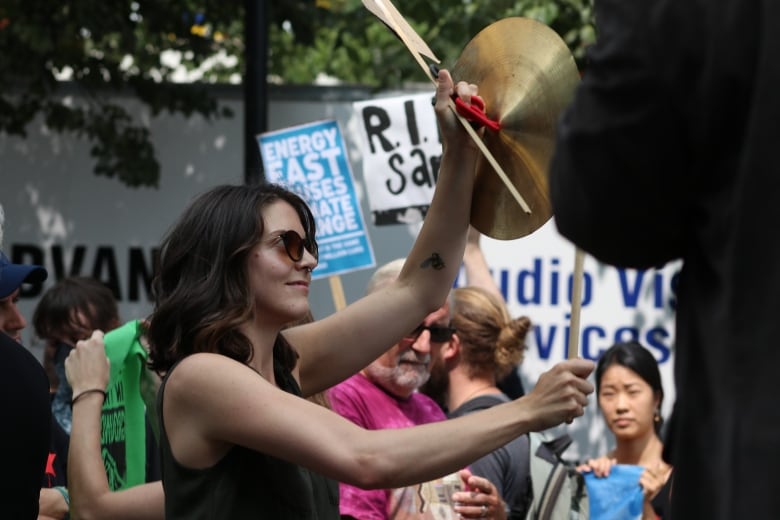 Anti-oil activist Robin Tress said the rally supporting Energy East was ignorant of the reasons why the project was cancelled in 2016. (Kaitlyn Swan/CBC)

The pro-oilsands rally lasted just over an hour amid isolated shouting matches between those on both sides of the issues.

At one point Picard faced off with a masked anti-pipeline protester from a podium microphone saying that the rally was also about “gay rights” and Canada’s recently tested relationship with Saudi Arabia, where homosexuality is criminalized.

“I’m gay and Métis,” Picard said to the masked person.

“I can speak on behalf of Aboriginals and gay people. You can’t speak for us.”

Tress said the remarks confused her.

“Their main argument is founded on the idea that Energy East could stop us from buying oil from Saudi Arabia, but it will not,” she said.

Irving Oil, based in Saint John, N.B., was supportive of Energy East but told reporters in 2016 that it would not deter them from purchasing Saudi oil.

Despite comments by both sides about First Nations in support and in opposition to oil developments in Canada, neither group had First Nations representatives at the demonstrations.

Tress said the opposition rally likely came together too quickly for everyone to hear about it.