A former owner of the Needle Vinyl Tavern is cutting ties with the company that owns the building.

The news came during a town hall hosted by the Station on Jasper on Monday night. The new downtown venue took over the space previously occupied by the Needle, which closed in November following sexual assault allegations against former co-owner James Leder related to an incident in March 2017.

“The owner involved in the incident in March of 2017 has resigned his board position in the building and given his proxy on all matters related to the building ownership,” according to a statement issued by Redbrick Inc., the building’s ownership group.

Greg Scott, operating owner of the Station on Jasper said Redbrick turned down an invitation to the meeting and provided the statement in lieu, which he read to the crowd.

Brittany Rudyck was one of many packed into the venue on Monday. It was the first time she was back in the space since November, when she publicly accused a former co-owner of the Needle of groping her during a function.

Brittany Rudyck publicly accused a former co-owner of the Needle of groping her at a function in March 2017. Monday’s meeting was the first time Rudyck, a former employee, was back at the venue since the Needle closed in November. (Brittany Lyne Rudyck/Facebook)

Rudyck said she went into the town hall without expectation, but not particularly hopeful. She left nearly two-and-a-half hours later feeling markedly different, especially knowing Leder was no longer associated with the space.

“In leaving, I felt much lighter and I felt a little bit more of a sense of closure, which I didn’t anticipate feeling at all,” she said. “Last night almost felt like a period at the end of a very long and drawn out sentence.”

The meeting focused on how the Station on Jasper planned to prevent sexual violence. Scott committed to posting the venue’s sexual harassment policy publicly and to form an advisory board of people who would discuss and update the policy on an ongoing basis.

The conversation needs to be ongoing, but posting the policy on the website would be a step toward making the space safer, said Kristin Raworth, an advocate for survivors of sexual violence. 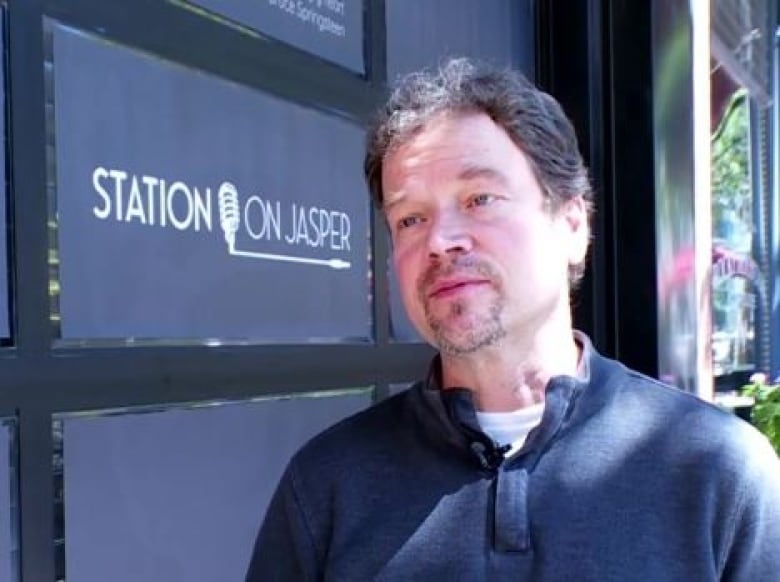 Greg Scott, operating owner of the Station on Jasper, hosted a town hall to discuss how to prevent sexual violence at the venue.

Scott said the venue would bar people from the venue with legal justification. Pushed by some in the crowd, he said there would not necessarily be a ban on anyone accused of sexual assault, including Leder.

“I’m not here to be a judge, jury or conviction on any individual, so we wouldn’t act upon something that we’re not privy to or involved with at that point,” he said.

Instead, anyone who harasses other people at the venue will be removed. Depending on the incident, Scott said the venue may also flag that person to other venues.

The Needle shutdown down permanently in February, three months after Rudyck, a former employee, went public with allegations against a former co-owner. Other employees came forward with accusations of harassment and toxic workplace conditions at the bar.

Musical acts refused to play the venue and the venue closed shortly after.

In April, former Needle co-owner James Leder, 37, was charged with one count of sexual assault relating to an alleged incident on March 10, 2017.

Leder is expected to appear in court on Friday. None of the allegations against him have been proven in court.

The Station on Jasper took over the space at the end of June.

While Rudyck did not always agree with Scott’s approach, she was encouraged by the meeting. As far as she knew, it was the first town hall meeting to directly address sexual violence in the service industry.

“I hope they continue. I hope it’s the start of something that echoes through all bars, all venues, all art spaces,” she said.

“That’s the only way anything is going to shift.”