If you drop a bowling ball and a baseball from a tall building, you can generally expect them to fall and hit the ground at the same time.

Even in conditions with extreme gravity, very different from the scale of physics we’re familiar with on Earth, gravity affects objects the same way — as Albert Einstein predicted.

This has allowed us to go beyond what is possible in the solar system.– Ingrid Stairs, University of British Columbia

So finds the most extreme test yet of a key principle of gravity from Einstein’s general theory of relativity called the strong equivalence principle, which states that all objects fall the same way in the same gravity.

Some other theories of gravity had suggested that the principle might not apply in cases with extreme gravity, like neutron stars.

Such “zombie stars” are sometimes left behind after a massive star explodes in a supernova. The material collapses back into a core so dense that a teaspoon of it would weigh as much as Mount Everest.

The study was led by Canadian astronomer Anne Archibald, who is originally from Montreal but is now a postdoctoral researcher at the Netherlands Institute for Radio Astronomy. (Cees Bassa)

But a study led by Canadian astronomer Anne Archibald, a postdoctoral researcher at the Netherlands Institute for Radio Astronomy, took really precise measurements of a neutron star called a pulsar “falling” toward another star. The researchers compared that to measurements of a much lighter white dwarf star (with just a fifth the mass of the sun) falling toward the same star, and found no measurable difference in their response to the star’s gravity.

“What we do see we’re pretty sure is completely consistent with general relativity,” said Ingrid Stairs, an astronomy professor at the University of British Columbia who co-authored the study, published today in Nature.

Einstein’s theory describes gravity as a curvature in space-time that objects follow as they “fall.” In space, that falling due to gravity can be seen as stars, planets and moons orbiting one another. 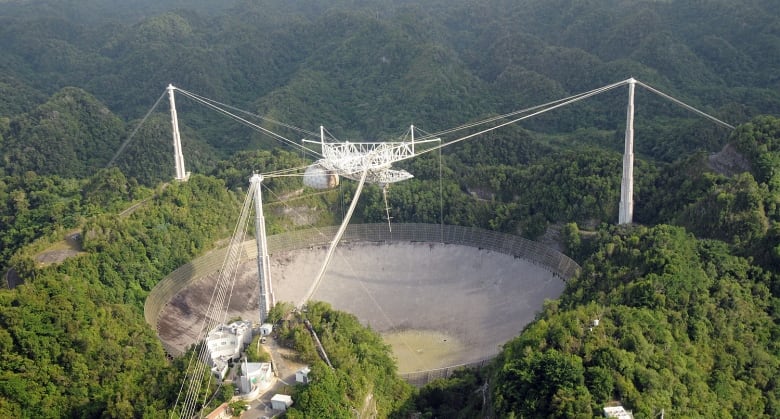 The William E. Gordon telescope at Arecibo, Puerto Rico, was one of three radio telescopes used to measure the pulses from the pulsar. (Arecibo Observatory)

“In Einstein’s theory, the Earth or a bowl of petunias or a whale, or any other object should go around exactly the same way,” said Archibald. “It shouldn’t matter what they’re made of, or how massive they are.”

Of course, the idea that gravity is caused by a curvature in space-time is pretty weird. That’s one of the reasons why people have tried to come up with other theories of gravity, Archibald said. Many have been proven wrong, but some haven’t yet. Some of those, called scalar-tensor theories, predict that objects will not behave according to Einstein’s theory under extreme gravity conditions.

This new experiment doesn’t totally disprove those theories but make them much less likely.

What made the test possible was the discovery of a rare and unique trio of stars by Stairs and some colleagues in 2012 — a special kind of neutron star orbiting in a triple star system.

The neutron star observed in this study is a millisecond pulsar, a neutron star that spins extremely quickly — 366 times per second, in this case. Like a lighthouse that emits a blinking beam of light as it turns, the pulsar emits a beam of radio waves that hits the Earth as a series of pulses. That speed of pulsar is rare — most rotate at less than a tenth of that speed. 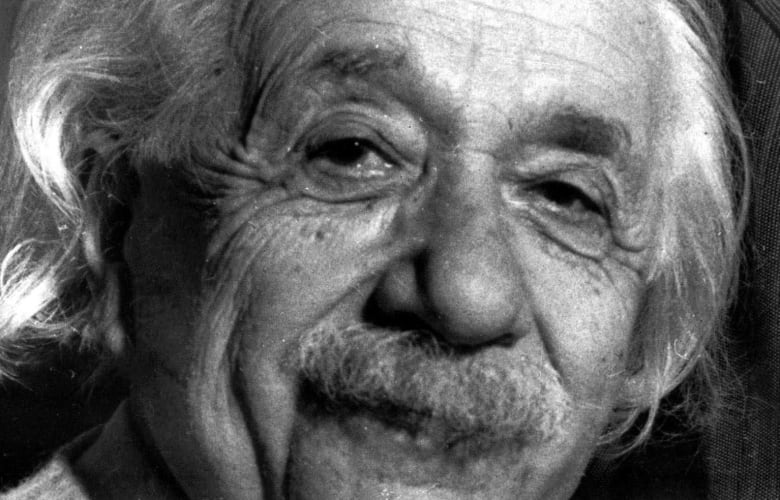 Albert Einstein’s general theory of relativity says that gravity is a curvature in space-time and predicts that all objects will fall the same way in a gravitational field, regardless of their mass or what they’re made of. (Canadian Press photo archive)

But what’s even rarer is a pulsar orbiting with two other stars — it and a smaller white dwarf circle each other, as a slightly larger white dwarf orbits them both. While active, “living” stars are often found as trios, neighbouring stars typically don’t survive the massive explosion that generates a neutron star.

“For a triple system to survive a supernova that forms a pulsar is really remarkable,” Archibald said.

Right away, Stairs said, researchers realized this system, called PSR J0337+1715 and located about 2,400 light-years away in the constellation Taurus, could be used for a unique test of gravity.

“This has allowed us to go beyond what is possible in the solar system,” Stairs said. “We were pretty excited by that.”

Researchers could compare the effect of the outer white dwarf’s gravity on the two inner stars of very different masses.

To do that, they measured the pulses emitted by the pulsar using three radio telescopes on Earth. Archibald, Stairs and several collaborators, which included researchers in the Netherlands, Australia and the U.S., spent 1,200 hours babysitting the telescopes remotely from their computers to collect measurements.

They analyzed the timing of each pulse to track the pulsar’s movement. The more frequent the pulses, the more precise the measurements. Finally, they looked for changes in the pulsar’s orbit and that of the inner white dwarf corresponding to the movement and gravity of the outer white dwarf.

Nestor Ortiz, formerly of the Perimeter Institute in Waterloo, Ont., and now a postdoctoral researcher at the University of Jena in Germany, has worked on scalar-tensor theories of gravity. In an email to CBC News, he agreed the study rules out some but not all alternative theories of gravity a bit more than before. He added that the study doesn’t prove general relativity is “the” correct theory of gravity and “there is still a lot of room” for other theories to survive.

Sanjeev Seahra, a professor at the University of New Brunswick who is interested in alternate theories of gravity and quantum mechanics that help explain dark energy, such as some mentioned in the study, called its findings an “exciting result.”

“One of the most intriguing things about this result is that the authors actually did measure a small deviation from general relativity, but the data wasn’t good enough to tell if it was a genuine signature of alternative gravity or a statistical fluke,” he said in an email. “I’m looking forward to followup work to sort this out.”