The Syrian army is fighting to cut rebel ground in the southwest in two by seizing an airbase near the Jordanian border, an insurgent official said on Thursday, as intensifying airstrikes killed dozens of people nearby.

President Bashar al-Assad has sworn to take back every inch of Syria, and recapturing the southwest, one of the first hotbeds of the uprising against him, would leave rebels with only one remaining stronghold, in the northwest.

The area is in a “de-escalation zone” agreed last year by the United States, Jordan and Assad’s ally Russia to curb fighting. But despite American warnings that it would respond to an attack, it has not done so and Syrian opposition figures on Wednesday decried Washington’s “silence.”

Assad’s offensive in the southwest has been backed by airstrikes and shelling that have killed 93 civilians since June 19, the Syrian Observatory for Human Rights war monitor said, including 46 on Wednesday and Thursday.

Insurgent territory in the southwest is strung along the borders with Jordan and the Israeli-occupied Golan Heights, narrowing to only a few kilometres wide at the city of Deraa.

The government’s efforts in recent days have been focused near Deraa in the southwest, near the borders of both Israel and Jordan, which says it isn’t able to take in any more Syrian refugees. (Google)

The fighting so far had mostly focused on areas northeast of Deraa, where the army and allied militia recaptured a string of villages, but was extended to the city’s outskirts on Tuesday.

The Britain-based monitoring group and two rebel sources said aircraft had bombed Busra al-Sham, Nawa, Rakham and other towns in the province.

The Syrian army on Thursday captured the town of al-Harak, a military media unit run by the government’s Lebanese ally, Hezbollah reported.

Warfare in southwestern Syria is sensitive to neighbouring Jordan and Israel, though government bombardments so far have not focused on territory nearest to the Golan Heights.

In Riyadh, the chief Syrian opposition negotiator Nasr al-Hariri condemned “U.S. silence” over the offensive in the de-escalation zone, comparing it to Washington’s prompt use of force against attacks on forces it is allied to elsewhere.

Only a “malicious deal” could explain the lack of a U.S. response to the assault, Hariri said.

France said it was extremely concerned by the attack, which it warned could carry the risk of regional destabilization. 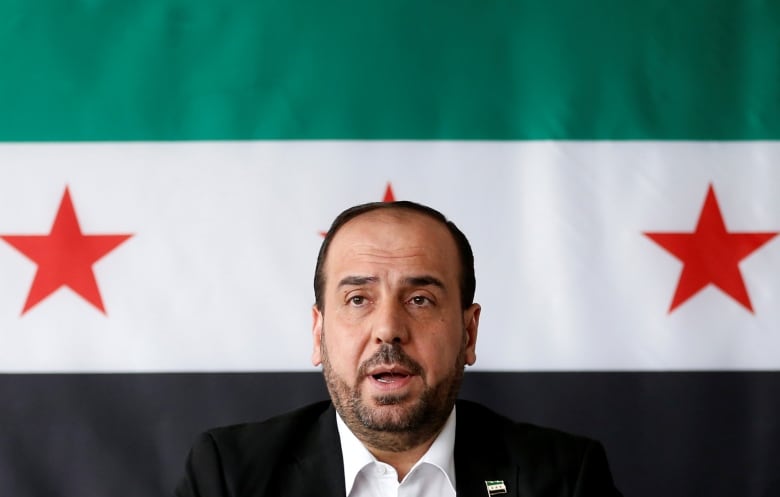 Nasr al-Hariri, head of the Syrian Negotiation Commission, slammed the U.S. on Thursday for failing to support the rebels in the southwest. (Frances Lenoir/Reuters)

There was no immediate comment on civilian deaths from the airstrikes from Damascus or Moscow, which have said they only target armed militants in the seven-year conflict.

“We can’t even catch up to count the airstrikes,” said Abdallah Mahameed, a rebel official in Deraa. “The house is shaking around us.”

Abu Jihad, a local opposition official near the border, said the violence since Wednesday had forced at least 11,000 people to flee their homes and towns. If the escalation continues, he said, people would head closer to the frontiers with Jordan and the Golan.

A Jordanian official who requested anonymity said the Jordanian army had stepped up its state of readiness at the border. The country already hosts more than 650,000 registered Syrian refugees and said it will not open the border for more.

It said 450 insurgents in the Laja area, which the army seized earlier this week, handed themselves in with their weapons to “settle their affairs” with the government.

Assad’s military, with the help of Russian air power and Iranian-backed militias, has driven rebels out of all their enclaves near the capital Damascus this year.

The United Nations says the southwestern assault has uprooted at least 45,000 civilians.

Vladimir Putin said in Moscow on Thursday that Russia had scaled back its help in the past few days. The Russian president said over 1,100 personnel and several planes and helicopters had departed from Syria in that time.