The family of a baby girl who died after being shaken by her mother’s boyfriend delivered emotional victim impact statements Friday in Edmonton’s Court of Queen’s Bench.

Brandon Calahoo was charged with second-degree murder for causing the death of Raelyn Supernant, but pleaded guilty in April to a lesser charge of criminal negligence causing death.

Reading from her victim impact statement, the infant’s grandmother, Robin Kuori, told court the child was “an absolute gift from God.”

“Every day, I pictured the future with Raelyn,” said Kuori, her voice shaking with emotion. “I enjoyed every moment with her.”

Kuori described how her life changed when she learned that the two-month-old baby had been admitted to Edmonton’s Stollery Children’s Hospital on July 25, 2016.

“I was overwhelmed with sadness and anger.”

Raelyn Supernant was two months old when she died in 2016 after being shaken by her mother’s boyfriend, Brandon Calahoo. (Robin Kuori)

Calahoo, who was Raelyn’s mother’s boyfriend at the time, admitted he had shaken the little girl that morning because she was crying.

Doctors determined that the infant had severe neurological impairment, and she was taken off life support. She died on Aug. 8.

The baby’s mother, Carley Supernant, also spoke in court of the guilt she felt and how Raelyn’s death had broken her family.

“No parent should have to go through this,” she said. “Being trapped in my mind is terrible.”

Outside of court, Kuori told reporters she was seeking justice for her granddaughter.

“What [Calahoo] did, it’s not acceptable,” she said. “There is absolutely no excuse, even if she was crying. There’s no excuse to pick up a baby and shake her.”

Kuori said she is launching an education campaign to bring awareness to the dangers of shaking babies.

“If we can save one baby from Raelyn’s story, that honours Raelyn.” 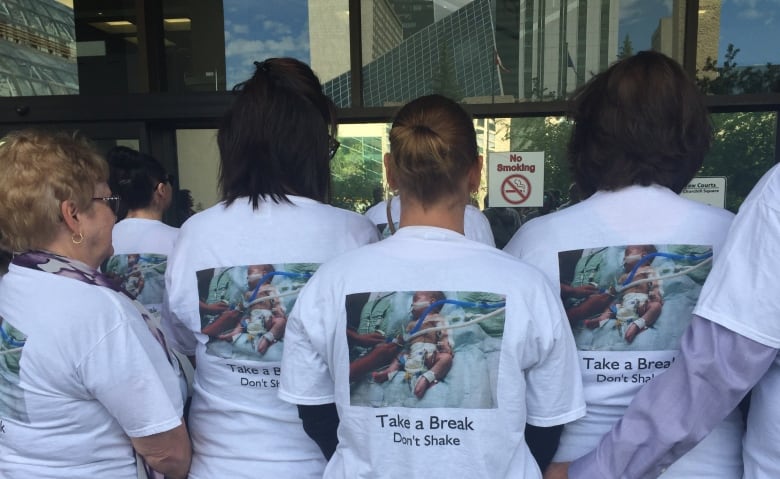 The family of Raelyn Supernant wants to raise awareness about the dangers of shaking babies. (Josee St-Onge/ CBC)

Calahoo was initially charged with aggravated assault but following an autopsy, the charge was upgraded to second-degree murder in January 2017.

He was scheduled to be sentenced Friday, but the date has been put over to September to allow court ordered reports to be completed.

The 11 victim impact statements read in court will be considered at sentencing.