A neighbourhood fete is not complete without traditional Bavarian folk-dancers wearing lederhosen and dirndl, its alpine villages are dotted with fairytale castles peeking out of deep forests and we all know about the beer.

If there is any remaining doubt, guides leading throngs of tourists across the Marienplatz, Munich’s main square, can be heard calling it “Germany’s Texas.”

“We like to take life a bit slower,” one tour guide told his group as they stood waiting for the square’s giant glockenspiel to start playing. “We’re just all open, friendly people, a little bit different, a little unique.”

Bavaria is a key to Germany’s current political manoeuvring. It is the home of the Christian Social Union party (CSU), a key coalition partner of Chancellor Angela Merkel’s Christian Democratic Union (CDU).

The CSU is creating part of the domestic pressure building on her ahead of this week’s EU summit in Brussels, with immigration set to dominate the meeting.

That would force her to fire him and likely bring down her coalition government.

Back in Bavaria, the CSU has decided there is more to be done in protecting and promoting Bavarian identity.

Legislation making it compulsory for all state buildings to display a cross or crucifix at their entries came into effect in Bavaria on June 1.

“It [reminds] all the people who work there that they have to work under a higher power and they have to fulfil the Christian way of life,” said Robert Brannekaemper, a CSU member of the Bavarian state legislature.

“It’s a symbol of Bavaria and Christian culture over the centuries.”

He insisted the new law is not a message for those who don’t share the faith, outsiders or refugees and migrants from Muslim countries.

Critics say one thing it certainly is, is a message to the Bavarian electorate. 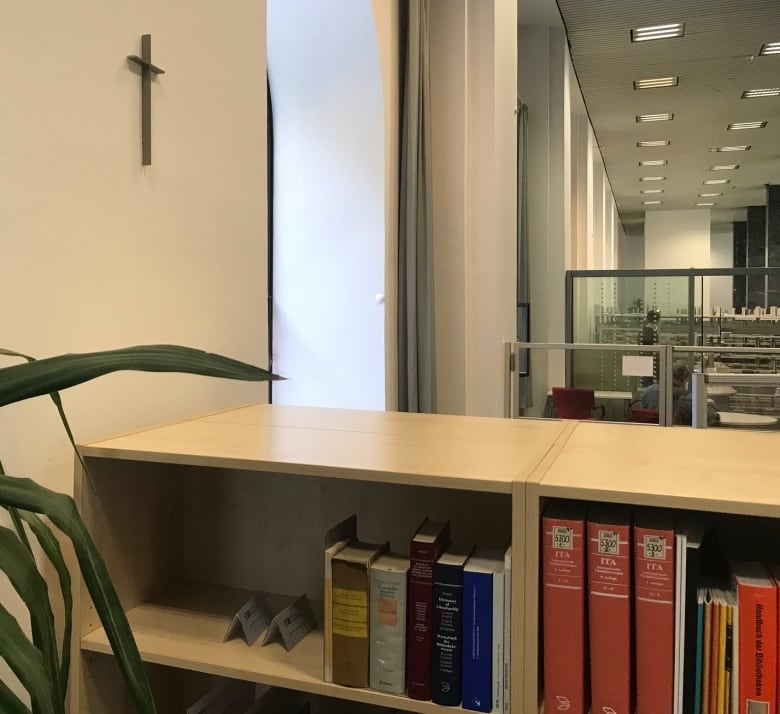 The Bavarian State Library hung a cross in its reception area shortly after the CSU-led government required crosses to be hung in the entrances of state buildings. (CBC)

Brannekaemper had just been making a guest appearance at a CSU information booth at a cultural fair in a Munich suburb. State elections are planned for the fall, and electioneering is underway.

Most Bavarians are Catholic, and critics accuse the CSU of trying to exploit religion for electoral gain.

They also say the party is increasing xenophobic messaging in a bid to hang on to supporters thinking of turning toward the far right.

Last fall the Alternative for Germany party won just over 12 per cent of the vote in federal elections, becoming the first extreme-right party to enter the Bundestag since the end of the Second World War.

It can create a mood to challenge that easygoing attitude the Bavarians boast of. And there are plenty of people who worry about growing intolerance in the state.

“If I want to guarantee every person in the state the right to choose religion, then I cannot make it mandatory to hang crosses for rooms where people of multiple confessions work,” said Tarek Carls, a student doing a master’s degree in psychology at the University of Regensburg, about 125 kilometres north of Munich. 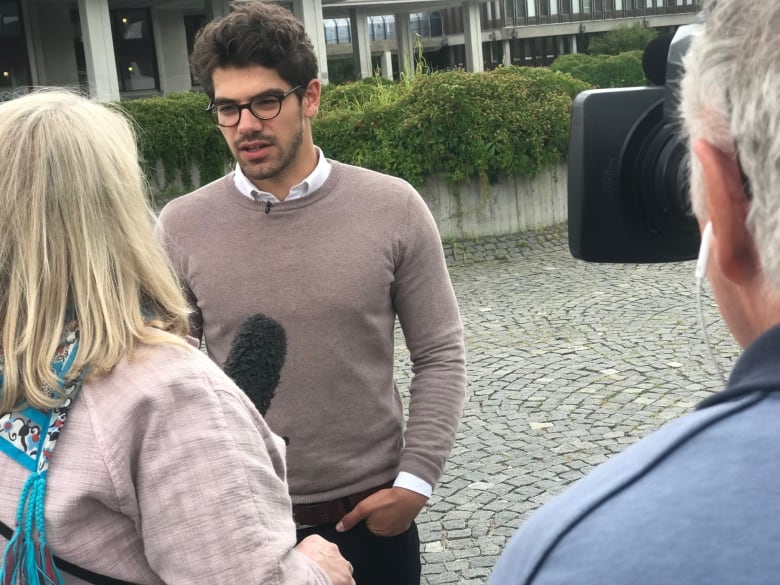 Tarek Carls speaks to a CBC crew at the University of Regensburg. ‘A lot of people thought I just wanted to take away Christian values,’ he says. (Felix Franz )

He’s gathered more than 50,000 signatures in an online petition against the decree on displaying crosses in public buildings. Universities, along with some cultural institutions, are exempt from the order.

The University of Regensburg received complaints about Carls’s posts, which also urged institutions to defy the order. But the university’s chancellor stood by him.

Carls also says racial slurs were directed at him online, even though he is a German whose family has no history of migration. 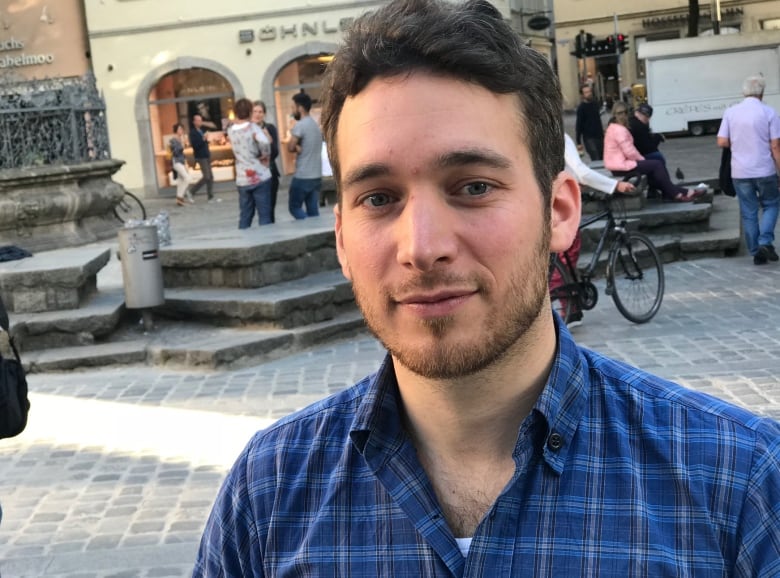 Social worker Riccardo Schreck says there has been a worrying shift in attitudes towards migrants in Europe. In Bamberg, activists have resumed weekly demonstrations in support of a more liberal attitude. A migrant centre on the edge of town is home to some 1,500 people. (Felix Franz)

In another Bavarian city, Bamberg, activists are so concerned about the mood in Germany and beyond that they have resumed weekly demonstrations in support of a more liberal attitude toward migrants and asylum seekers.

Social worker Riccardo Schreck says the demonstrations began after the deportation of an Afghan student a year ago.  A migrant centre on the edge of town is home to some 1,500 people.

“For the last few months we didn’t see the need to do it every week,” he said.  “But right now we see a policy shift in Europe and we find it, we deem it to be necessary.”

Schreck finds it troubling that while asylum applications have dropped dramatically across the European Union, the heat of the debate on immigration and refugees has not.

Countries like Italy and Malta are trying to compete over who cares less.— Social worker Riccardo Schreck

In Germany asylum applications in 2017 were down by 70 per cent compared to the year before, according to the European Asylum Support Office.

“We can see actually that right now countries like Italy and Malta are trying to compete over who cares less.” 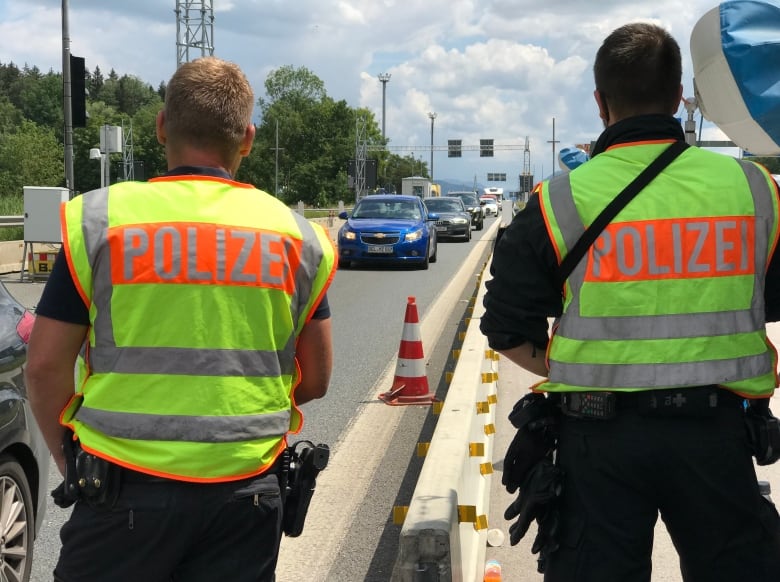 German border police guard a checkpoint near the town of Bad Reichenhall along Bavaria’s border with Austria. Some European Union countries have reintroduced border checks in the wake of the 2015 refugee crisis despite the EU’s Schengen Accord, which guarantees free travel between member states. (Margaret Evans/CBC)

But the numbers argument holds little sway with the CSU’s Brannekaemper.

“We have no problems today,” he said. “But if you look at the world you will see that Africa will have in a few years nearly three billion people. Three hundred million will want to come to Europe.”

“It was a mistake to open the gates and everyone comes to Germany,” he said.

And as for the cross requirement? A typical move by politicians, taxi driver Gunter Dietrich offered up when asked about the controversy.

“They like to make an elephant out of a flea.”

But the elephant is getting bigger.