The future of tree planting could involve drones shooting seeds from the sky.

New drone-seeding technology was demonstrated Wednesday in Edmonton by the Canadian Forest Service.

The technology is fairly straight forward: picture a paintball marker mounted on a drone. Seeds are stored in a hopper and then fired into the ground with pressurized air at the desired location.

If successful, the technology will be significantly faster than the traditional planting methods.

“If it works we can expect much, much faster replanting of large areas,” David Price, research scientist with Canadian Forest Service said in an interview with CBC Radio’s Edmonton AM.

“Essentially this thing could plant maybe at the rate of one seed every second. So if we want to want to plant a thousand trees, in a hectare for example, that would take a few minutes.”

Price said the technology could be used to regenerate forests after large clearcuts or forest fires.

Wednesday’s demonstration was the first time the technology has been demonstrated in Canada. A field trial is scheduled for Thursday near Slave Lake.

“The intention is that we’ll plant about 2,500 seeds per hectare on an area of about five hectares,” Price said.

Though the planting process is quick, it will still take several weeks or months to gauge success, based on the number of new seedlings in the area.

Drone-seeding technology is just one example of how drones are changing the forestry industry, Price said.

Drones are already being used to measure trees and could be used in the future for more precise herbicide application.

“The attraction there, is that once you know exactly where the seedling that you are trying to protect is, then you can use a very small dose of herbicide exactly in the place where you need it,” Price said. 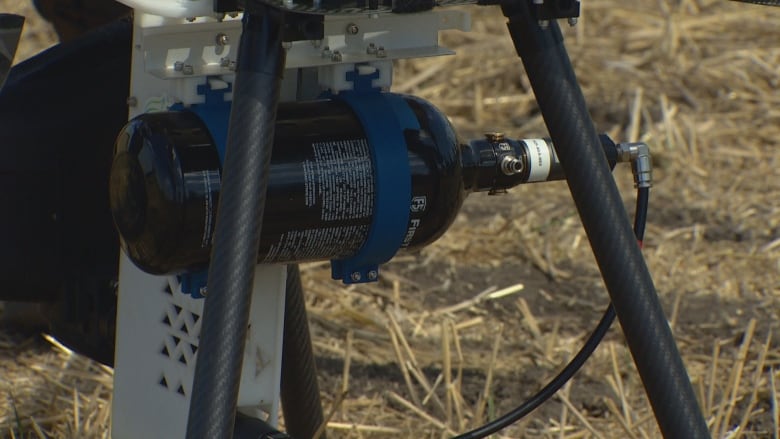 The drone stores seeds in a hopper and then fires them into the ground using pressurized air. (CBC)

“So your costs of herbicide application go down dramatically and the environmental impact also goes down proportionally.”

Even if the trials are successful, Price estimates it could be a few years before the technology is adopted by the provinces or industry.

Price added that it’s also possible the research will show that humans are still the best way to plant in some areas. Still, the drone-seeding technology has a lot of potential.

“The fact that it might work in Australia or in Myanmar for example, doesn’t prove that it will work in Canada,” said Price. “But obviously we have to start somewhere and this is an opportunity to try it out.”