Some of the first officers to reach the Las Vegas hotel room where a gunman unleashed the deadliest mass shooting in modern U.S. history busted in with shields and found his body and assault-style weapons scattered around, according to police body-camera video released Wednesday.

Hours of footage from two officers’ body-worn cameras show police walking into a casino that was still packed after gunfire started raining down on an outdoor concert from 32 floors up in a Las Vegas Strip casino-hotel.

People were still playing slot machines as an officer told an employee: “There’s a shooter. He’s shot and killed multiple people already.” Police ordered people to flee and told a worker: “Get everyone out of here.”

Police say Stephen Paddock killed 58 people and injured hundreds more from the windows of his hotel suite last fall before killing himself as authorities closed in. The videos do not provide a complete view of everything police discovered when they entered Paddock’s suite or any clues about why he opened fire Oct. 1.

The footage shows officers checking rooms in the Mandalay Bay before getting to Paddock’s room. An officer says, “Breach! Breach! Breach!” before a loud bang and a fire alarm begins to sound.

Inside, Paddock’s body is seen his back, clad in dark pants and a long-sleeve shirt with a glove on his left hand. An apparent pool of blood stains the carpet near his head as a police SWAT officer walks past.

An officer grabs an assault-style rifle from the ledge of a broken window and other weapons are found around the room.

The Las Vegas shooting has left the city reeling. With at least 59 dead, it’s the worst mass shooting in modern U.S. history 4:20

The videos record officers talking about whether there is evidence of a second shooter and finding Paddock’s driver’s licence. Police and the FBI later said they believe the 64-year-old former accountant and high-stakes video poker player acted alone.

The videos do not show what the first officer through the door saw because he didn’t activate his body-worn camera. The disclosure by police lawyers late Tuesday raised questions about whether officers followed department policy.

The newly released videos represent a sample of hundreds of hours of body-camera recordings, none of which offer a motive for the shooting, Clark County Sheriff Joe Lombardo told reporters Tuesday.

The police investigation is not finished, said Lombardo, the elected head of the Las Vegas Metropolitan Police Department. He called the preparation and release of the information sought by media outlets in a public records lawsuit a “monumental task” that diverts resources from police work.

“What is seen on those videos in no way changes the facts that we were able to clarify for you shortly after the crime,” Lombardo said.

Four Canadians were killed in the Las Vegas mass shooting and at least six more were injured 2:08

Lombardo’s top spokesperson, Carla Alston, said Wednesday that no one in the agency would comment about whether the first officer through the door followed proper procedure by not turning on his camera or whether he had been disciplined for violating policies.

The department requires officers with body cameras to activate them during calls that lead to interaction with residents and searches. 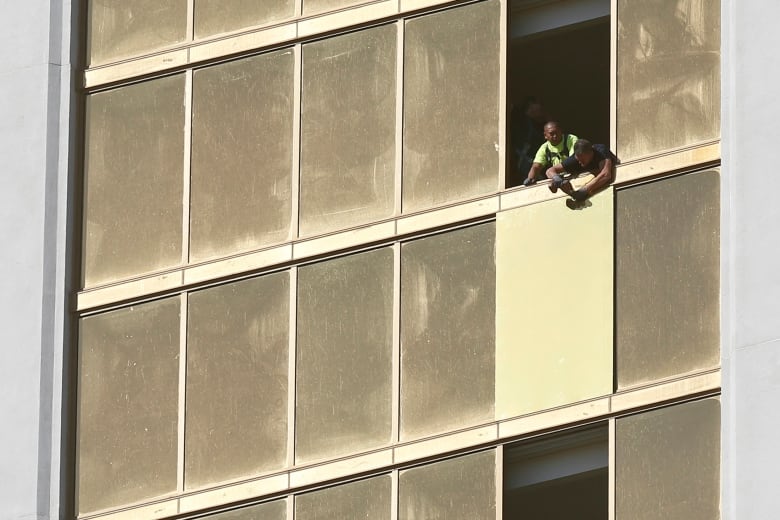 Workers board up a broken window at the Mandalay Bay hotel in October 2017, which shooter Stephen Paddock used to shoot down at revellers along the Las Vegas Strip. (Chris Wattie/Reuters)

The Associated Press and other media outlets sued to obtain videos, 911 recordings, evidence logs and interview reports to shed light on the response by public agencies, emergency workers and hotel officials while Paddock fired for more than 10 minutes from upper-floor windows of the Mandalay Bay resort.

Department lawyers told a judge that there were almost 750 hours of body-camera recordings and volumes of 911 audio recordings. They called it time-consuming and costly to comply with the public records requests and said the materials could disclose investigative techniques.

Seven months after the shooting, the Nevada Supreme Court last week upheld a state judge’s ruling that the records must be made public. Lombardo said Tuesday that the department would release more recordings in batches in coming weeks.

“We believe the release of the graphic footage will further traumatize a wounded community. For that, we apologize,” he said.