Even three years ago, one of the world’s biggest companies announcing it was bringing 3,000 high-paying jobs to Vancouver would bring with it applause from virtually all corners.

But in 2018, it seems everything that happens here is viewed through the lens of housing prices.

Swear to god if a giant meteor were crashing through the atmosphere straight for Vancouver, all we’d talk about is property values

Which means Amazon’s decision to expand its Vancouver operations is being met with mixed feelings, as people consider the ramifications of thousands of extra workers needing homes in a city already stretched for affordable units.

“It’s a supply issue, and it’s going to exacerbate the housing crisis. You have more people, making more money, who are going to displace people making less money,” said Joe Bowser, a software developer with Adobe.

Bowser has worked in the region for a decade but lives in Burnaby because he can’t afford property in Vancouver. He acknowledges Amazon’s decision is good for people in his industry but worries what the net effect will be in a region where vacancy rates are so low.

“Interns [at Amazon] make 75 or 80,000 a year, still in school making this money, and they’re going to displace people [from the rental market] making 40 to 50,000 … they’re going to be paying the rent that went up that you’re no longer able to afford,” he said.

“If you’re not keeping up with these wages, you’re not going to be able to afford Metro Vancouver anymore.”

How much Amazon employees in Vancouver will make is a matter of some conjecture: while the company discloses the median salary of its workers ($28,446 US in 2017), the vast majority are warehouse workers — making it difficult to get a precise figure for its white-collar workers.

But conventional wisdom, gleaned from media reports and online wage-comparison sites, is that the median salary will be somewhere around $100,000 US. And considering the average wage for a software engineer in Vancouver was approximately $60,000 US in 2017, that will create upward pressure on wages in the city’s tech sector.

Part of Vancouver’s presentation to Amazon during its failed pitch for the corporation’s second headquarters was data showing how low tech salaries were in the city compared to other regions. (City of Vancouver)

“For people who are already in Vancouver, most understand that the salaries are low, especially given the housing market,” said Allen Pike, CEO of Steamclock Software, a Gastown-based app design and development studio with 11 employees.

He says Amazon’s increased presence will not only increase the average salary but also act as an incubator for the city’s tech scene.

That definitely helps people in the industry. But Pike agrees it’s an open question over who else it will help.

“Given the housing bubble we have in Vancouver, salaries overall need to rise in order for people to live here. But obviously, if only some people’s salaries rise, that can potentially increase the cost for people who don’t work for Amazon.”

Absent the real estate bubble bursting or tens of thousands of social housing units coming out of thin air, it seems like an unsolvable paradox: for people to live in Vancouver at current housing prices, the city needs more jobs at higher salaries.

But if those jobs create more incentives for renovations and higher-end housing developments, then it increases the exodus of working-class people from the city.

“It’s going to present a lot of opportunity for more people to afford housing. Affordability has two sides. It’s our ability to pay and also the cost of housing,” said Sean Elbe, the manager for the technology sector of the Vancouver Economic Commission, a city-run organization, during an interview with Gloria Macarenko, the host of CBC’s On The Coast.

He used the example of a “good friend” of his in Vancouver going back to university for a computer science degree. Amazon coming, Elbe said, was an opportunity for him to get a higher-paying job than he could before.

“That’s a really good question. I don’t have that data for you,” said Elbe. “However, our understanding of what we’ve seen locally, that even amongst —”

The telephone line went dead and the radio interview was suddenly over. Just one more query to add to the growing list of unanswered questions about Vancouver’s housing market. 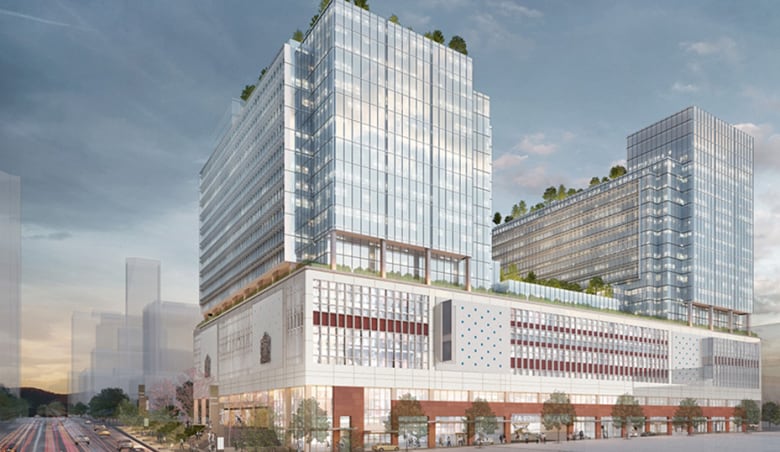 A sketch of what Amazon’s new Vancouver office, located on top of the Canada Post building at Hamilton and Georgia, could look like. (Amazon)

If you are interested in housing affordability, check out CBC’s new podcast, SOLD! Host Stephen Quinn explores how foreign investment in real estate divides community, class and culture. Find it at CBC Podcasts or Apple Podcasts.