It all started with a Big Bang. But then what?

Renowned theoretical astrophysicist Stephen Hawking had been trying to answer that and other questions about the universe right up until his death. But in his final paper, submitted just eight days before he died on March 14, at age 76, Hawking and co-author Thomas Hertog proposed that the universe is actually simpler than what’s been suggested in other theories.

Yes, they say, the massive explosion known as the Big Bang did create multiple universes — but not as many as the current theory predicts. The number of multiverses is finite, not infinite, according to them.

But if we want to understand the paper — which appeared earlier online and, on Wednesday, in the journal High Energy Physics — it’s best to have a grasp on how the universe began. And also quantum mechanics, holographic universes and string theory.

Here are how some key points break down:

The most popular theory on how the universe came to be is the Big Bang: that roughly 13.8 billion years ago there was an incredibly brief period of cosmic inflation — faster than the speed of light — that produced all the matter in our universe.

The theory’s complicated math also suggests the existence of multiple universes, or pocket universes, where things would be vastly different. There could be universes with no stars or galaxies or matter as we know it.

That was the problem. The old theory was not very predictive.– Thomas Hertog , co-author

(It’s not known what came before the Big Bang. But one theory is that these multiverses created our universe, and that there have been multiple Big Bangs.)

It’s a pretty nifty concept. But the Big Bang theory is not without its flaws, and a big one that Hawking and Hertog address is that it tells us little about our own universe.

“If there’s an infinite range of worlds in your theory, as you can imagine, your theory is not going to say much about how our own universe should be,” Hertog told CBC News.

“That was the problem. The old theory was not very predictive.”

A timeline of the universe, from the Big Bang roughly 13.8 billion years ago. (N.R.Fuller, National Science Foundation)

The trick to improving the Big Bang theory, Hertog says, is reconciling Albert Einstein’s theory of general relativity with quantum mechanics — a battle that’s been going on in the world of physics for a long time.

Einstein gave us the theory of general relativity in 1915, which explains the motion of planets, galaxies and other very large objects.

Quantum mechanics, however, focuses on extremely small objects, like atoms. 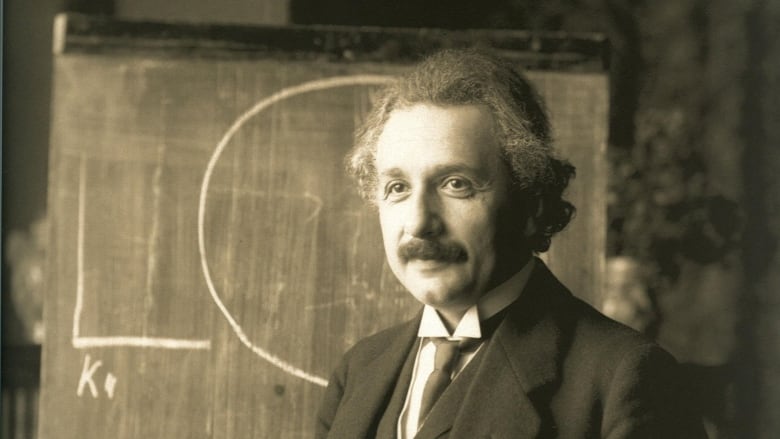 Albert Einstein wrote his theory of general relativity in 1915. One problem? It doesn’t line up with quantum mechanics.

And so far physicists have been unable to unite the two theories, into a “unified theory,” in any way that makes sense.

“Theories of the Big Bang are all about bringing together, reconciling Einstein’s relativity… with quantum theory, which describes the microscopic world,” Hertog said.

“Bringing together these two is a very hard problem.”

Trying to solve it leads us to…

We live in four dimensions: the three of the physical world, plus time. String theory — which is part of quantum mechanics — proposes that vibrating, 11-dimensional strings produce different particles such as atoms.

This theory supports the multiverse concept. You can watch string theoretician Michio Kaku explain it below:

But string theory also proposes that space can be described in two dimensions, with the third as a kind of hologram. You can think of 3D movies as an example: the movies have depth but are presented on a two-dimensional screen.

Put simply, and to extend the metaphor, Hawking and Hertog propose there is a boundary, represented by that screen, that limits how many multiverses exist.

Why are theoretical physicists even attempting to determine what kind of universe or multiverse we live in?

“The laws of physics, the ones we test in our labs, turn out to be very, very special. They are delicately fine-tuned and balanced in order for life and complexity and structures to be able form in our universe,” Hertog said.

“We want to understand, by studying the Big Bang, what makes our universe special.”