Research suggests even underground oilsands mines have profound effects on the forest community that vary from animal to animal.

“What you’re seeing in the oilsands is a change in how that landscape works,” said University of Victoria ecologist Jason Fisher, who works for the Alberta government agency Innotech.

The fact we found these consistent large effects on the entire mammals community was quite a surprise to me.– Jason Fisher, University of Victoria

Fisher’s paper, published in the journal Frontiers In Ecology, looked at the effects of forestry and in-situ oilsands mines on 10 mammals from moose to wolves to squirrels. It found some species were winners and some were losers, but all were affected.

“I didn’t expect to find an effect on red squirrels or snowshoe hares,” Fisher said. “The fact we found these consistent large effects on the entire mammals community was quite a surprise to me.”

Fisher’s paper looked at 3,000 square kilometres of forest north of Cold Lake, Alta., that was heavily logged and criss-crossed by roads, seismic lines, well pads and other energy industry features. All the oilsands development in the area is in situ, meaning the bitumen is mined from beneath the surface without large open pits.

Suncor’s Dover nsolv in-situ oilsands project in Fort McMurray Alta., is seen in a 2017 photo. All the development in the area where the new study was conducted is in situ, meaning the bitumen is mined from beneath the surface without large open pits. (Jason Franson/Canadian Press)

He and co-author Cole Burton set up wildlife cameras at 62 sites and set about documenting animal life. They studied species that could be photographed: wolves, deer, moose, bears, coyotes, lynx, foxes, hares, squirrels and a type of weasels called fishers.

Three years, 141,000 photos and a complicated statistical analysis later, they had a clear picture of how industrial features were affecting the animals.

The impacts were complex.

Cutblocks, with their open shrubbery, were good for moose but bad for hares. Seismic lines were great for coyotes but terrible for bears. Trails were good for lynx but bad for fishers. Squirrels were fine with trails but disliked well sites. 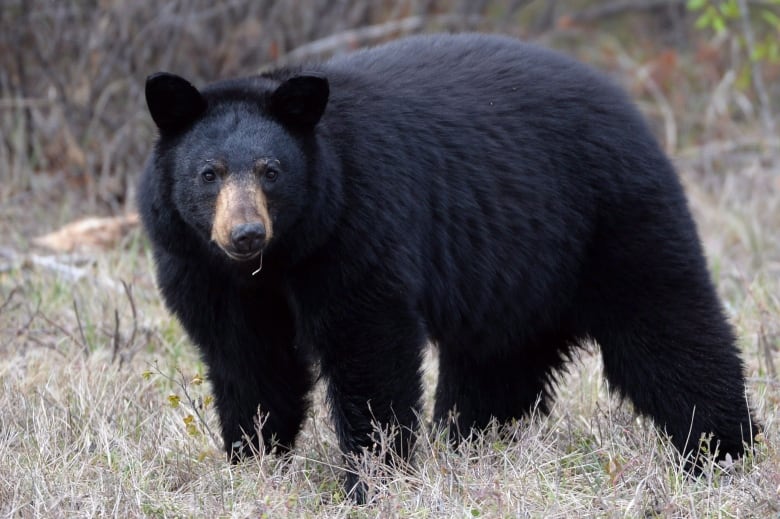 A black bear stands near the side of Highway 881 near Conklin, Alta., on Tuesday May 10, 2016. On average, Fisher found man-made features led to a decreased presence of moose, black bears, fishers and foxes. They were particularly hard on foxes and bears. (Jonathan Hayward/Canadian Press)

On average, Fisher found man-made features led to a decreased presence of moose, black bears, fishers and foxes. They were particularly hard on foxes and bears.

But those features led to the other six species studied being more common, especially white-tailed deer.

“A carnivore that makes its living by chasing things through the woods, then that species is going to do well,” said Fisher. “If you increase resources for something that can exploit (shrubby) vegetation, that’s the kind of species that does well.

“For species that don’t rely on movement through a forest or (shrubby) vegetation, those are the losers.”

No species was unaffected. That means a study of one species — say, caribou — can’t deliver a complete picture of how development affects ecosystems, Fisher said.

“By trying to fix the problem symptom by symptom, you miss the underlying problem, which is the fundamental change to the landscape.”

Scientists are just starting to sort through the tangled web of life in Canada’s northern forests, said Fisher. But they’re making progress, he said, and their work needs to be consulted as governments consider development.

“We can’t demonize any of these industries. This is the net result of a bunch of things happening on a landscape all at the same time.

“To not include cumulative effects assessment in a scientific way is to ignore a lot of the information we have available.”