This is an excerpt from Second Opinion, a weekly roundup of eclectic and under-the-radar health and medical science news emailed to subscribers every Saturday morning.

If you haven’t subscribed yet, you can do that by clicking here.

In both cases, there were no official product recalls. That’s because investigators couldn’t identify a specific product to recall. The road from field to food store is complicated and they so far have not been able to trace precisely where the lettuce came from and what it encountered along the way.

On Wednesday the U.S. Food and Drug Administration (FDA) said it was “examining all possibilities, including that contamination may have occurred at any point along the growing, harvesting, packaging and distribution chain before reaching consumers.”

It’s now clear that E. coli-contaminated lettuce reached many consumers, including some Canadians. Six people in four provinces became infected with bacteria that is genetically similar to the E.coli outbreak that’s been making headlines in the U.S. for more than a month.

For every one case reported, there are usually 30 going on in the background, which are not reported.– Keith Warriner , food scientist

“One of the six has been hospitalized,” Dr. Howard Njoo, deputy chief public health officer at the Public Health Agency of Canada, told CBC News.

No Canadian deaths associated with this outbreak have been reported. But back in December, two Canadians died after eating romaine lettuce and 42 others got sick. The victims included infants and the elderly, and almost half of them were so sick they ended up in the hospital.

In the December outbreak, the victims all reported eating romaine lettuce either at home or in prepared salads from grocery stores, restaurants and fast food chains.

But when Canadian Food Inspection Agency officials tested lettuce for traces of E. coli, they found nothing.

At the same time late last year, U.S. officials were tracking their own outbreak of E. coli — a genetic match to the Canadian bug. Twenty-five people in 15 states got sick and one person died. FDA investigators could only narrow down the source to “leafy greens.”

In the current outbreak, U.S. officials have reported one death and 171 illnesses, with nearly half ending up in the hospital.

In the search for the source of any food contamination, the trail quickly goes cold. The clock starts ticking the moment the food is ingested, but it can take days before symptoms appear — and weeks for the illness to be reported to health authorities.

Only a fraction of the cases are ever officially identified.

“For every one case reported, there are usually 30 going on in the background, which are not reported,” said Keith Warriner, a food safety researcher at the University of Guelph.

By the time officials realize there’s a problem, the last traces of the wilted lettuce have been tossed, and any packaging has gone off for recycling or to the dump.

“This is not definitive evidence that the lettuce was not sourced from the same location,” said Warriner. “Individual cattle can shed different genotypes of E. coli O157, and hence it is possible that a range of different strains contaminated the lettuce.”

Warriner also finds the timing between the two outbreaks interesting.

“I find it curious that there were 150 days between the outbreaks, which is around the time it takes to replant and grow a second crop of romaine lettuce,” he said. “I think they are related.”

Ground Zero for the contaminated romaine in both Canada and the U.S. is believed to be the Yuma growing region in Arizona, where most of the winter romaine for the continent is sourced.

But that’s as far as U.S. and Canadian investigators have gone in the hunt for the “smoking” lettuce leaf.

The FDA states that “the ongoing traceback investigation indicates that the illnesses associated with this outbreak cannot be explained by a single grower, harvester, processor or distributor.” 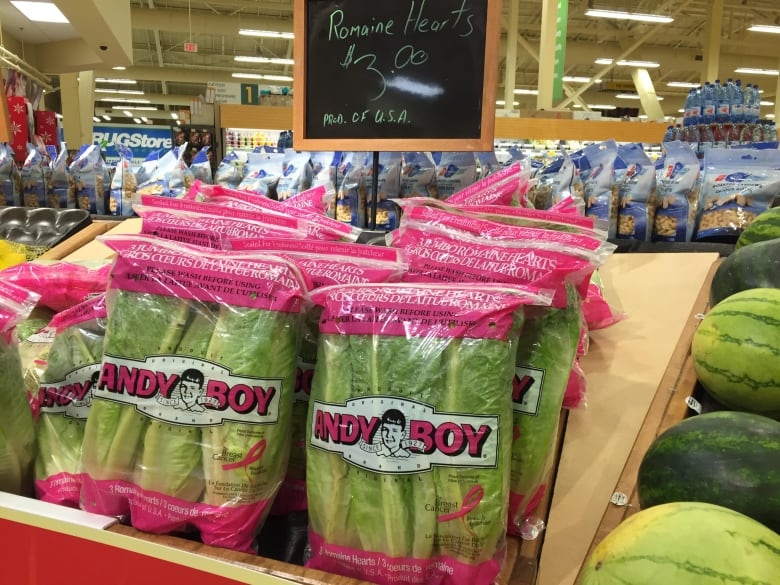 Most of the romaine lettuce grown in North America in the winter comes from Yuma, Arizona. (Peter Cowan/CBC)

One problem is that the lettuce from different farms gets mixed up. “We have found that a single production lot may contain romaine from multiple ranches, which makes the traceback more challenging,” read the FDA report.

Warriner said it would have been possible for government officials to recall romaine from the Yuma region months ago.

The good news is that there’s no more romaine from Yuma on store shelves right now. The FDA reports that the last romaine lettuce came off the fields on April 16. Romaine only lasts for 21 days.

It’s possible that the romaine mystery will never be solved, although food safety experts have theories about how this kind of contamination could happen.

Lettuce in any part of the world that’s being produced is at risk of contamination and therefore we certainly can’t let down our guard.– Dr. Howard  Njoo

“It’s usually the irrigation water,” said Warriner, as water for crops is often taken from streams near areas where cattle, sheep or other livestock could be infected with E.coli bacteria.

“The Yuma area is dry and therefore dependent on irrigation,” Warriner said. “A classic route is runoff from a manure heap into the river. Farmers take that water and irrigate the crops.”

Officials have declared the current outbreak over now that romaine lettuce is no longer coming from the Yuma region. Still, consumers are advised to follow safe food-handling practices. In the case of romaine lettuce, that means removing the outer leaves and rinsing the rest.

“Lettuce in any part of the world that’s being produced is at risk of contamination and therefore we certainly can’t let down our guard,” said Njoo.