Alberta is now home to the largest area of protected boreal forest in the world, following an announcement Tuesday that set aside more than 13,600 square kilometres of land across much of northeast Alberta.

The provincial and federal governments, the Tallcree First Nation, oilsands giant Syncrude and the Nature Conservancy of Canada announced the creation of new protected areas at a news conference in Edmonton

“It is very rare that you can announce a protected area network that is globally significant in such incredible size,” said Bob Demulder, the NCC’s regional vice-president for the Alberta region. “These things don’t happen very often.”

All of the parks, except Dillon River, border on Wood Buffalo National Park, a UNESCO world heritage site.

The creation of all but one of the parks was announced in 2012 but never enacted, said Matt Dykstra, press secretary to the minister of the environment and parks.

Together with Wood Buffalo National Park and the existing and new parks, the protected land will form a conservation area of 67,735 square kilometres, almost twice the size of Vancouver Island.

The area will be off limits to logging or industrial development.

The Birch River park was created after complicated agreements between the Alberta and federal governments, the Tallcree First Nation and the NCC.

The Tallcree tribal government agreed to relinquish a timber quota it had no intention of using, which was then purchased by the NCC for $2.8 million, with Syncrude providing the majority of the funding. 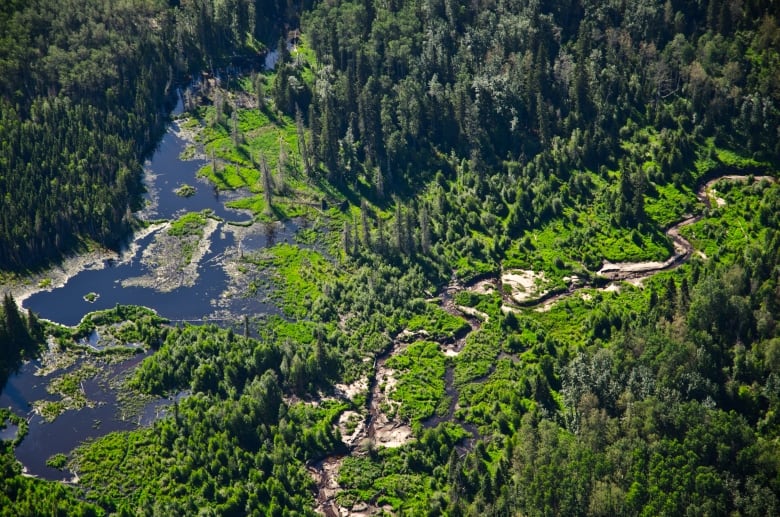 An aerial vier of the forests near Fort McMurray. (Submitted/ Michel Rapinski)

“The boreal forest holds greater value to the First Nation for exercising our traditional way of life and the quiet enjoyment of our treaty rights,” Chief Rupert Meneen from the Tallcree tribal government said in a news release.

The government will enter into management and monitoring agreements with First Nations and Métis communities.

The province said it will fund the process of integrating Indigenous traditional knowledge and will hire Indigenous monitors to maintain and offer education and outreach to park visitors.

Off setting pressure from oilsands development

Syncrude said in a joint news release the park will be used to offset emissions from its future industrial activities.

“This agreement supports our commitment to responsible development of the oilsands resource, while contributing to the conservation of the boreal forest for future generations,” said Doreen Cole, Syncrude Canada’s managing director.

Nearly one-third of world’s boreal zone lies within Canada, NCC said in a news release. The forest provides fresh air, nurseries for migratory birds and is the planet’s largest carbon sink, keeping carbon out of the atmosphere so it doesn’t contribute to climate change.

The protected land will provide protection for many species, including wood bison, woodland caribou and the peregrine falcon, all listed as threatened under the Species at Risk Act, the NCC said.

It will also relieve the burden the wildlife and environment faces from oilsands development in the Fort McMurray region.

“I don’t believe it is a panacea but it is certainly the right move,” Demulder said. “We note from the First Nations and industry that are part of the supporters of that, they (too) see some places that are best left to nature and themselves.”