For 36 years, the late Abraham Pisiniquon kept a journal of his life as a hunter, husband, father and grandfather in the Cree communities of Fort George and Chisasibi, in the James Bay region of Quebec.

Kathy Louttit kept her grandfather’s journals safe and set about improving her understanding of the Cree syllabics they were written in. (Submitted by Kathy Louttit)

After his passing in 1998, his granddaughter, Kathy Louttit, kept the journals safe and set about improving her understanding of the Cree syllabics they were written in.

Now, 20 years and a Cree literacy course later, the 52-year-old Chisasibi resident is sharing her juumshuum’s [grandfather’s] writings — observations of a Cree life from 1962 to 1998 — on social media.

And she is connecting with her language, culture and family in a way that often overwhelms her.

“I’ve kept them all these years, wondering what I could do with them,” said Louttit of the journals, adding she was close to her grandparents and spent a lot of time with them in the bush. “I wanted [the journals] because I wanted to read them myself.” 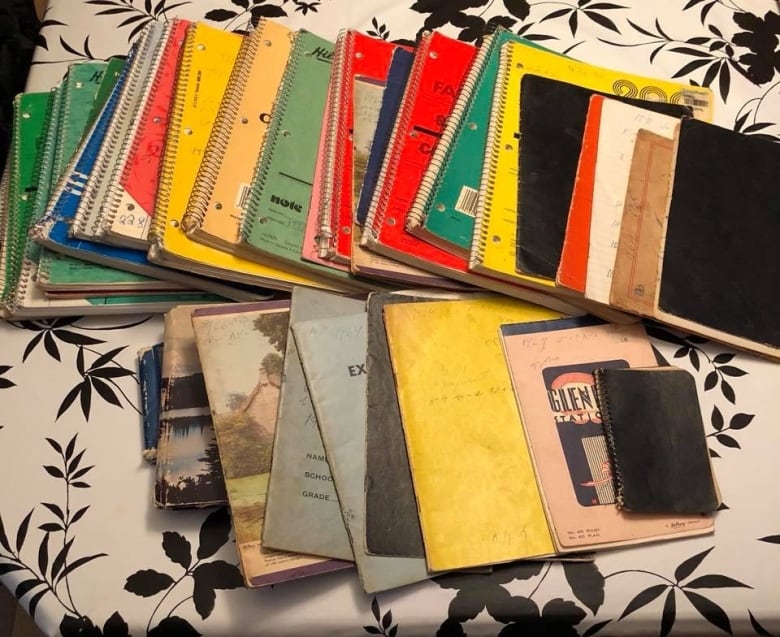 Pisiniquon’s journals. Louttit says his entries changed over the years, and became more detailed as his syllabic skills improved. (Submitted by Kathy Louttit)

The journals offer a fascinating glimpse into life before the James Bay hydroelectric project of the 1970s, at a time when geese were plentiful, people lived out on the land, and seals were hunted in the bay into the month of June.

Some other entries describe seals being caught in the hunter’s nets.

Louttit says her grandfather was an accomplished hunter and his journals reflect how important the hunt was to the Cree way of life.

“I always knew he was a hunter. That’s what he did for survival,” said Louttit, adding she is intrigued by what her grandfather wrote about the animals that were harvested. “I didn’t know you could catch seal with a net, and he even mentions that they caught whales in their net.” 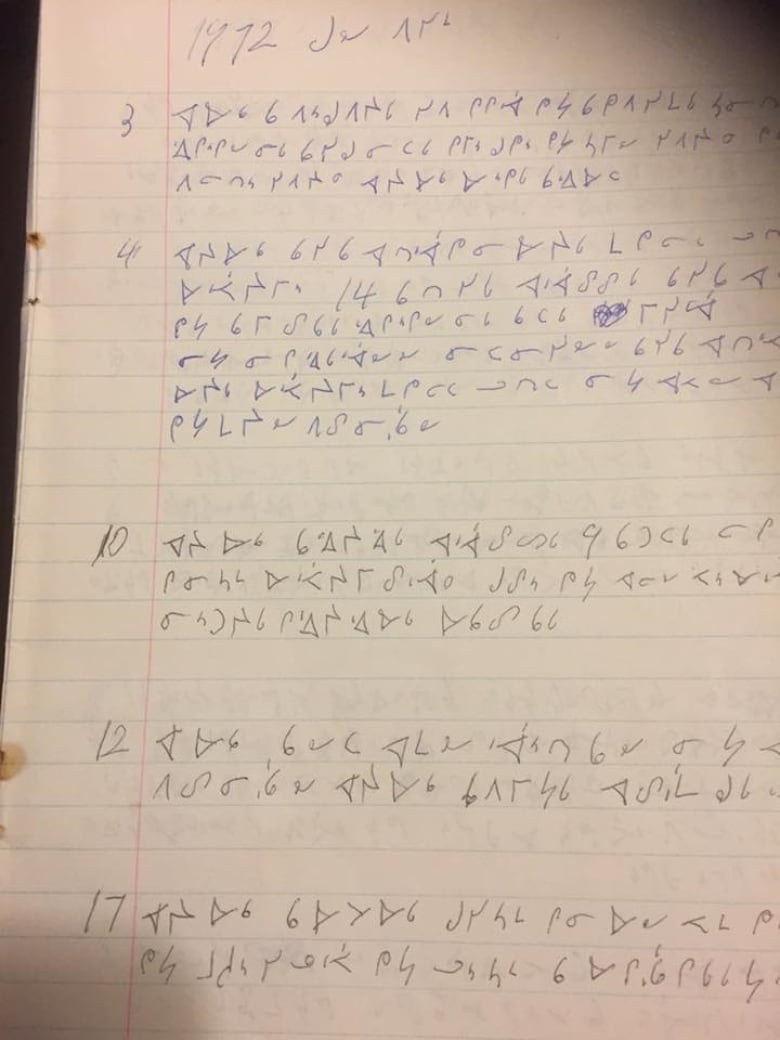 A page of Pisiniquon’s journal documents two weeks in 1972. (Submitted by Kathy Louttit)

The journal entries show a significant change in the weather and the animals that were hunted, according to Louttit, “especially in the waterfowl — the populations have diminished.”

Pisiniquon learned Cree syllabics while working as a catechist at St. Philip’s Anglican Church in Fort George back in the 1950s, according to an online story and language database called East Cree language resources.

Louttit started sharing the journal entries on her Facebook page on Aug. 18, 2015 — the anniversary of the founding of the community of Chisasibi. 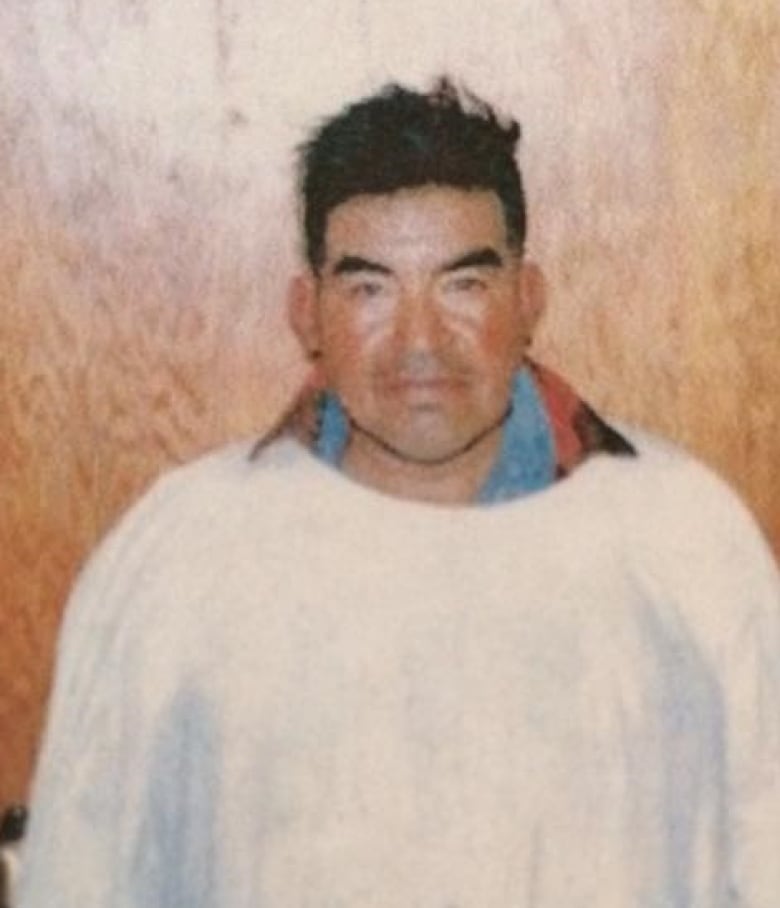 Pisiniquon, in his younger days. Pisiniquon learned syllabics while working as a catechist at St. Phillip’s Anglican Church, in Fort George. (Submitted by Kathy Louttit)

“Today was the inauguration of this new town,” Pisiniquon wrote in his journal on Aug. 18, 1981, the day Fort George residents were relocated to Chisasibi to make way for the hydroelectric project and the flooding it would bring.

“Cutting of the ribbon by George Shem. Ribbon was made of moose hide. Raising of the flag by Samuel Tapiatic and a huge feast was held.”

Pisiniquon painstakingly recorded the births and deaths in the community and often noted the weather. He also recorded many old Cree birth names and place names, as well as the names of Cree children who were celebrating their walking out ceremony.

The ceremony is performed when infants are old enough to walk, to welcome them into Cree society, said Louttit.

Louttit said sharing the journal entries has been emotional for her and the people whose loved ones are mentioned in them.

“I’m so overwhelmed by the response from people,” said Louttit, who has opened up a private Facebook page to continue sharing her grandfather’s journal entries. “I think he would be proud.”

She said she is also talking with the local Chisasibi Heritage and Cultural Centre about possible ways to preserve and share the journals.

For 36 years, the late Abraham Pisiniquon kept a journal of his life as a hunter, husband, father and grandfather in the James Bay Cree communities of Fort-George and Chisasibi. His granddaughter Kathy Louttit is now sharing his writing and observations on social media. She talks about her Nuumshuum Abraham with CBC North host Marjorie Kitty. 14:31