Sticky sap may be a tree’s perfect antidote against the destructive mountain pine beetle, new research from the University of Alberta suggests.

Nadir Erbilgin, a forest entomologist at the University of Alberta, made the discovery while studying a stand of lodgepole pines that survived an infestation of the bark-eating insects.

The hardy pines, in the Grande Prairie area, were able to survive because of a chemical that produced high volumes of resin in the bark, said Erbilgin.

Erbilgin and his team also found that surviving trees contained low amounts of pheromones that are used by the beetle to lure other beetles to the tree.

‘We were so shocked’

“Some of the individual trees of lodgepole pine survived,” Erbilgin said in an interview Wednesday with CBC Edmonton’s Radio Active.

“No matter how many beetles attacked them, they really survived. We were so shocked to see that.”

Instead of burrowing under the bark, the destructive bugs would become lodged in the sticky substance.

“When the insect attacks and punctures the tree, the resin comes out,” said Erbilgin, who has been studying the mountain pine beetle for more than a decade.

“The resin has a lot of toxic chemicals inside — chemicals that are toxic to the beetle — and once the resin becomes exposed to the sunlight, [the beetles] become frozen.

“That gives the insect a really hard time.They can not pass through.”

This picture shows a mountain pine beetle stuck in the resin of a lodgepole pine. (Nadir Erbilgin)

The current mountain pine beetle outbreak started in B.C. in the 1990s, with populations of the bark-devouring insect fuelled by hot, dry summers and unseasonably mild winters.

Today, the beetle is an epidemic. The infestation has brought down more than 16 million hectares of B.C. forest, and has begun destroying huge swaths of Alberta’s boreal habitat.

Conservation officials have attempted to stem its spread through controlled burns, clear-cutting and surveillance efforts.

“Bark beetles represent some of the largest tree-killing insects in the world,” Erbilgin said.

“I’m talking hundreds of thousands of square kilometres, and millions of trees.”

The tiny insects, about the size of a grain of rice, ambush trees by burrowing and laying their eggs under the bark.

Their offspring then eat beneath the bark, eventually cutting off the tree’s nutrient supply, preventing the tree from repelling and killing the attacking beetles.

Within a year, the infected trees die and turn a sickly shade of orange.

Erbilgin’s discovery means that the seedlings of lodgepole pine can be bred to survive attacks by the beetle.

Planting resistant trees alongside those that are vulnerable will help prevent the insect from destroying entire forests, he said.

Understanding the development of these defence chemicals will be useful for tree-breeding programs in the province, Erbilgin added.

‘I don’t know what we’re going to do’

While lodgepole pine may have the biological potential to withstand the beetle, Erbilgin’s research suggests that jack pine, a more recent victim of the beetle, may not have the same defence systems. 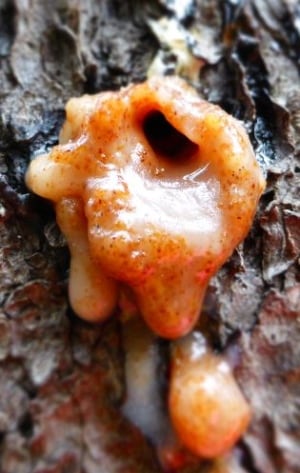 This photo shows how a mountain pine beetle successfully burrowed into the bark of its host. (Nadir Erbilgin)

Not only did the species lack the chemicals that encouraged high resin production, it also contained other chemical compounds which attract beetle populations to feed on the bark.

Researchers have yet to find any beetle-resistant populations of jack pine. The species began falling prey to beetle infestations in 2007.

Erbilgin describes it as a “double-whammy” against the survivability of the species.

“This is the worst thing we found. In jack pine, we haven’t found evidence of natural resistance,” said Erbilgin.

“The lodgepole pine will survive. It’s going to take a while but it will come back, but unfortunately I don’t have that confidence for the survival of the jack pine.

“I don’t know what we’re going to do. The only thing we can do is try to stop the beetle from spreading further east.”