It’s not known yet what kinds or how much sewage, chemicals and waterborne germs are mixed in the water. For now, health officials are more concerned about drownings, carbon monoxide poisoning from generators and hygiene at shelters. In the months and years to come, their worries will turn to the effects of trauma from Hurricane Harvey on mental health.

At a shelter set up inside Houston’s George R. Brown Convention Center, Dr. David Persse is building a clinic of doctors and nurses and trying to prevent the spread of viruses or having to send people to hospitals already stretched thin.

Volunteers with The American Red Cross register evacuees at the George R. Brown Convention Center. Health officials are trying to prevent the spread of viruses among the crowd of people living there. (Nick Oxford/Reuters)

“This is rapidly evolving,” said Persse, Houston Director of Emergency Medical Services. “I always worry in these large congregations of people about viral outbreaks that cause nausea, vomiting and diarrhea. And we are just getting started.”

Fewer than 20 people have been hospitalized so far from the convention centre.

“One of our goals is to appropriately treat people here with minor things so we don’t send everybody off to the hospital,” Persse said.

Many of the around 3,000 people who fled from Harvey’s flooding waited hours in water mixed with sewage, oil and gasoline. Some weren’t able to grab their medications or medical devices. Police officers on Monday afternoon were looking for more wheelchairs.

Donors have brought diapers, baby formula and other basic necessities to the convention centre. Officials are working with local pharmacies to replace lost medicines and dialysis clinics to serve patients in need of treatment. The Red Cross is arranging to bring in portable showers. A shipment of 50 wheelchairs was on the way Monday afternoon.

The U.S. Environmental Protection Agency will begin sampling the floodwaters as soon as possible, said EPA spokeswoman Liz Bowman in an email Monday. EPA teams will also be visiting water and sewage plants to offer help, she said. 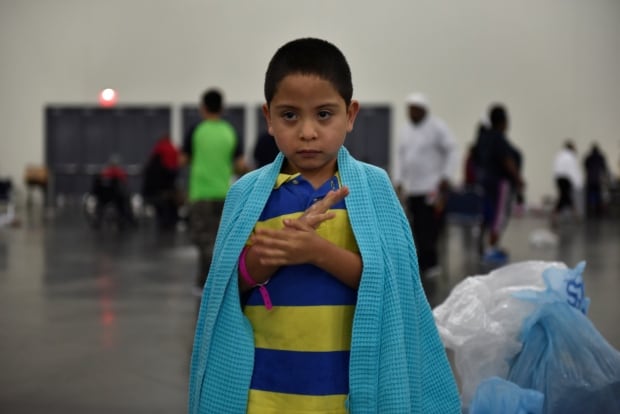 Evacuee Pete Quintana Jr. is wrapped in a blanket after being forced from his home by Hurricane Harvey. (Nick Oxford/Reuters)

EPA helped secure Superfund pollution cleanup sites last week ahead of the storm and is continuing to check with site operators.

Floodwater can be dangerous for people with open wounds, particularly if they have other health conditions. After Hurricane Katrina, five people with infected wounds died and health officials believe that exposure to brackish floodwater contributed to the deaths.

“In Katrina, a lot of people were concerned about illnesses from contact with the floodwater, but more infectious disease was associated with poor hygiene in overcrowded shelter facilities,” said Karen Levy, associate professor of environmental health at Emory University in Atlanta.

At Houston-area shelters, access to clean water or hand sanitizer and proper disposal of human waste should be stressed, she said.

Any health problems will be more dangerous for the most vulnerable — people with immune disorders, the elderly and the poor, Levy said.

“I’m sure this will happen in Houston,” he said. 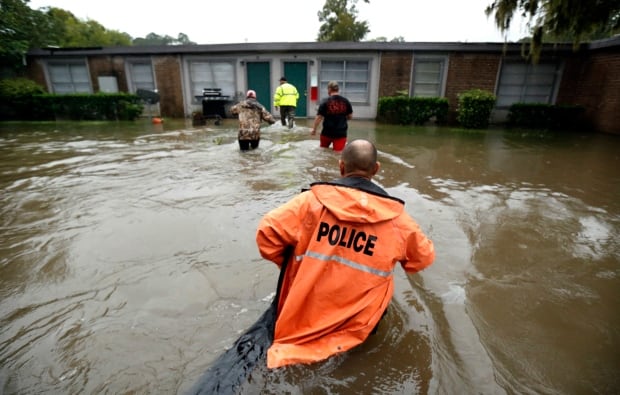 Health officials say when people eventually return to their flooded homes, they will face health hazards including mould and sewage, and are warning of the risk of carbon monoxide poisoning when using generators for electricity. (Tom Fox/The Dallas Morning News/Associated Press)

The most common flood-related deaths occur when people try to drive through flooded areas, according to the Centers for Disease Control and Prevention. Carbon monoxide may kill more as people return to homes without electricity and hook up generators, said the CDC’s Renee Funk.

“Any sort of roof over a generator is actually a problem,” Funk said. “When people go in and out to refill the generator they can be overcome. If a structure is attached to the house, the house can fill with fumes.

Best advice: Use a battery-operated carbon monoxide detector in the house if you’re using a generator for power, she said.

Mould is also a health hazard. The CDC recommends removing and disposing of drywall and insulation that was tainted by floodwater or sewage. Mattresses, pillows, carpeting — even stuffed toys — should be tossed out. Hard surfaces can be disinfected with a solution of one cup of bleach to 19 litres (five gallons) of water.

“That little spot of mould can grow in the home especially in the heat of the South,” said Dr. Parham Jaberi of the Louisiana Department of Health.

If mould covers more than 100 square feet, a trained mould remover is recommended, he said.