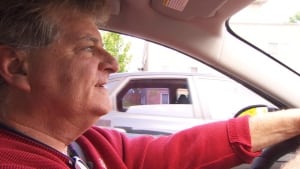 Peripatetic television director Brian K. Roberts is one of the unluckiest commuters in North America. When he’s not fighting traffic in Toronto and Vancouver, he’s stuck in L.A.’s notorious gridlock.

Like more than 50 million drivers in cities across the continent, Roberts relies on a loophole of sorts: the Waze app.

“You can choose your own icon, I happen to be a little red car,” Roberts says, firing up the app in his car before hitting the streets of downtown Vancouver.

“On a scale of one to 10, I think Waze is probably the most effective way of getting around town now.”

Using live traffic feedback from all the Waze users in the area, the app directs drivers to less busy routes.

But its algorithm doesn’t distinguish between commercial and residential streets. And that’s a problem for many who live along what have suddenly become popular shortcuts.

During normal business hours, Joel Becker is a mild-mannered Hollywood psychologist. But during rush hour, he’s transformed into an angry protester.

He picks up a handmade sign and stands on the street across from his house. The sign reads: “Slow Down!”

“I’m noticing cars just zooming by right now,” Becker says as a truck speeds past. “It’s getting close to four on a Friday, and this will just amplify for the next couple of hours.”

Twice a day, he says, the neighbourhood streets become freeways.

“Ever since the app Waze came on-board, this street — which was always known as a shortcut for the neighbours who lived here — has now been put on their radar screen,” Becker says.

Becker knows, of course, that stopping Waze will take more than just one man and a sign.

“I don’t know when the first kid is hit and injured whether someone would try to hold Waze liable for it in some way. Just like when a bar serves a drunk patron and that patron then goes out and kills someone,” he says. 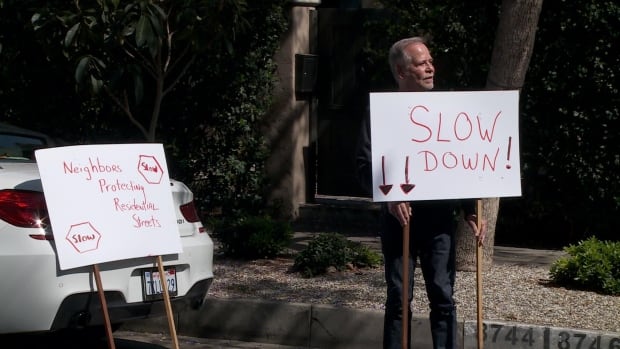 Joel Becker takes to his residential street in L.A., begging commuters to slow down. (Kim Brunhuber/CBC)

The backlash has reached the ears of some L.A. politicians.

L.A. city councillor Paul Krekorian reads out an email written by one of his angry constituents: “I raised my children here and never had any problem with them riding their bikes to school. Today I wouldn’t let them do that. The uncontrolled traffic on our residential street has already changed our lives,” it says.

The complaints he’s received from concerned residents in some of the affluent neighbourhoods he represents prompted him to draft a motion that would force Waze to change its algorithm to keep cars off residential streets.

“When it is focused by an application like this into a particular route in a particular neighbourhood that’s not designed to accommodate that much traffic, that’s when we really start to have problems.”

In a statement, Waze told CBC News that”with or without Waze, drivers will be looking for alternatives to major thoroughfares.”

But Krekorian, for one, dismisses the concerns of those who fear changes would essentially kill the app.

“It doesn’t at all,” he says. “My limited concern is the routes that go through the small residential streets. That’s certainly not essential to the app.”

For his part, Brian K. Roberts says he’s heard this argument before.

“The reaction to Waze and how it deals with traffic is very reminiscent of 25 years ago,” he says.

Before Waze, before the growth of the internet, he wrote a book called L.A. Shortcuts.

“This book L.A. shortcuts was an outgrowth of the 1984 Olympics that were going to be held in L.A. We thought the traffic was going to back up 50 miles in either direction, and we didn’t know what we are going to do. So we decided to write down all the best ways to get from one place to another,” Roberts says.

“Of course, you also got a lot of attention from homeowners and associations, because we kind of became Public Enemy No. One.” 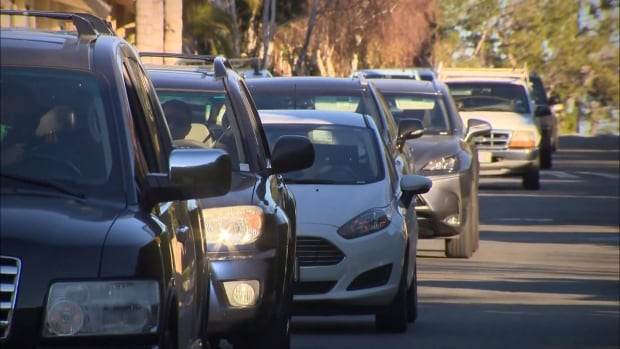 Traffic in a residential street near Hollywood. (KCBS)

A 1990 TV news story on KABC quoted a resident concerned about the growth in traffic on her residential street: “The book and some of the things have been published about commuter shortcuts and things like that have contributed to the problem,” she said.

25 years later, an app is picking up where Roberts’ book left off.

“So it’s a never ending cycle of finger pointing and blaming that never has a solution,” Roberts says. “I think the future is going to be by driverless cars operating with an internet hook-up, and you may have brand new collision avoidance systems, speeding controls, those kinds of things are going to provide a safer environment.

“But I still want to have my car take a street that’s a short way from where I want to go to where I come from.”