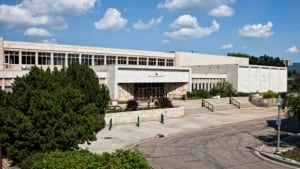 June Acorn loves the Royal Alberta Museum. The 85-year-old loves it so much that she has started an online petition to save it from the wrecking ball.

“I think that there’s a million things that could be done in that building,” Acorn told CBC News on Tuesday. “When there is a good building that can last, then I think it is tragic to see it being torn down.”

Staff are still using the facility as they prepare for their new building in downtown Edmonton. They won’t actually move out completely until late 2019.

Alberta Infrastructure recently began asking for ideas on how to turn the site into a public green space
once the museum finishes moving to its new site.

The province is accepting design proposals for green spaces until March 15 to decide whether it’s a workable option.

She points to the building’s Tyndall limestone exterior, the marble walls inside, solid oak doors and banisters, and exquisite brass fittings.

She notes the south face of the building has reproductions of the First Nations petroglyphs of Writing-On-Stone Provincial Park carved into the walls.

“You couldn’t possibly build that building now, and to tear it down … it’s ludicrous”, she said.

Last weekend, she started an online petition, Save the Museum Building in Old Glenora. Her goal is 1,000 signatures, and she has almost reached that mark.

She wants the building repurposed, saying people likely have some good ideas for its use. Although she personally would prefer it to continue as a museum of some sort.

“I just really hope that we can make a difference,” Acorn said. “I would think that history would mean more to the people of Edmonton than it does.”