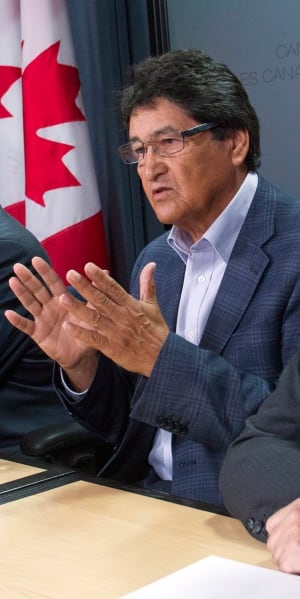 Ovide Mercredi was elected the party’s new president Saturday afternoon on day two of the NDP’s annual convention in Winnipeg.

As of Saturday, 919 delegates had registered at the NDP leadership convention — a number that is expected to balloon on Sunday, when the vote for a new leader of the party will take place.

Mercredi served as the national chief of the Assembly of First Nations from 1991 to 1997.

Duncan, who was endorsed by Steve Ashton, received a standing ovation for putting his name forward as a candidate for NDP president.

Ellen Olfert ran to be re-elected, and despite purportedly having the support of Oswald’s supporters, she ultimately couldn’t score a win.

In the first ballot, Mercredi received 218 votes — the highest number of the three candidates. Olfert came in second with 199 votes and Duncan in third with 145.

It isn’t clear whether the results from Saturday’s presidential elections give any indication of the kind of support leadership candidates will receive Sunday.

CBC will continue to provide updates from the NDP convention.

NDP delegates will decide Sunday whether it will be Ashton, Oswald or Selinger who will be the next leader of the party and the premier of Manitoba.