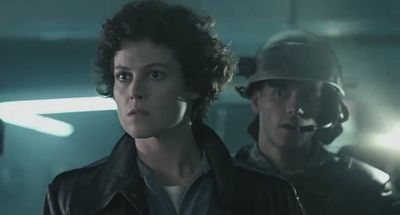 For his 11th birthday, my son asked if he could have a slumber party. He invited seven other fifth-grade boys. They played video games for a couple of hours, ate pizza, then said they wanted to watch a movie. They’d seen every comic book movie multiple times. Seen all the Indiana Jones films. Star Wars. Anything with a hobbit in it. The usual 11-year old boy options, circa 2015, weren’t going to work.

So I suggested “Aliens,” thinking, “Well, it’s exciting, and even if they haven’t see the first one, the movie tells the story well enough that you won’t be confused about who Ripley is and what’s at stake for her.”

They agreed (some of them had seen the first one anyway, and nearly all had seen at least one film with a xenomorph in it) and so we watched it together. And as we watched, I realized again that while unfortunately you can’t see a great movie again for the first time, the next-best thing is to show it to people who’ve never seen it.

My first time with James Cameron’s sci-fi war movie was a great filmgoing experience. I saw “Aliens” at the NorthPark 1 and 2 theater at NorthPark Mall in my hometown of Dallas, with a high school classmate who was, at that time, my regular action movie-watching buddy: Gabe Michaels. We drove to NorthPark to catch the 11 a.m. show on opening day and got in line a couple of hours early. We’d already drunk a bit of soda beforehand and I think we might have downed some more while standing in line. When we got into the theater, they seated us immediately and there was only one preview, for “The Fly,” and then wham, they started the movie. Neither Gabe nor I nor anyone else who’d been standing in that line wanted to get up from our seats and answer nature’s call, even though we all pretty desperately had to; there was a lot of muttering and shifting in seats, quite a few “grin and bear it” expressions.

If you’ve seen the film, you know there are no aliens to speak of for the first hour, then suddenly there are aliens all over the place, coming out of the walls and ceiling, drooling and shrieking and dragging Marines off into the darkness to be cocooned. It’s one of the greatest releases of built-up tension in action film history. Throughout this sequence the audience was enthralled, screaming as the xenomorphs attacked, cheering as Ripley took control of the all-terrain vehicle to rescue the imperiled Colonial Marines. Then when the ATV crashed through the wall, the music stopped, and Hicks told her she’d blown the trans-axle and need to “ease down, Ripley, ease down,” everyone collectively seemed to realize they were being given a breather, so at that point Gabe and I and probably a fifth of the audience rose from our seats and headed for the bathrooms: fast-walking, some running.

Guys at the urinals were peeing as fast as they could because they didn’t want to miss another minute of “Aliens.” You’d have thought somebody was timing them. Like this was the Olympic qualifying round for the bladder evacuation team. But they weren’t going fast enough to suit a guy standing near the front door of men’s room. He yelled, “Goddammit! All of you, PISS FASTER!!!” Everyone cracked up.

And that’s when I knew “Aliens” was going to be a hit.

Anyway, the slumber party: all the kids seemed to agree that “Aliens” was a good suggestion because even though it had aliens in it, it wasn’t just trying to scare you, like the first “Alien.” “It’s basically an action movie, that’s what I’ve heard,” my son’s friend said. Another seemed maybe just a little bit scared, and kept suggesting other viewing options, including “Guardians of the Galaxy,” “Dr. Who,” and (for some reason) “Saturday Night Live.” We watched it anyway. It went over well.

The biggest challenge was dissuading kids from trying to predict every single thing that was going to happen. This is a generation of talkers. They have to comment on everything. No thought can go unexpressed. Maybe this was true when I was a kid as well (I honestly don’t remember), but rather than endlessly correct them I decided to just roll with it, exercising my slumber party guardian veto power during scenes that I felt pretty sure would enthrall them if they would just shut up for five minutes (I was rarely proved wrong in my guesses). But it was a sharp crowd, and for the most part the movie went over quite well, for an analog-era science fiction spectacular that’s turning 30 next year.

One boy said that Ripley in her hyper sleep chamber looked like Sleeping Beauty. As this was an intentional reference on writer-director James Cameron’s part (there’s a Snow White reference an hour later) this seemed like a promising note on which to begin the screening. My son’s friend Henry said, “I like the way this looks. It’s futuristic but it’s old school. It’s almost steampunk.” “This is like Team Fortress 2,” a boy remarked. “Dude, shut up, this was made like 20 years before Team Fortress 2,” said the kid next to him. “This is, like, every science fiction movie ever made,” another said, as Ripley operated the power loader for the first time.

“This movie has so many cliches in it,” a boy said when Colonial Marines disembarked the drop ship and made their way through dark, rainy wind to enter the alien-infested colony. My son told him, “This movie was made in 1986. It invented all the cliches.” Another one of his friends was impressed by the “personal data transmitters” implanted in the colonists—impressed that someone had thought of that way back in 1986.

The first big jump of the night was the face hugger in the tank trying to “kiss” the evil yuppie Burke. All eight kids flipped out. One screamed. Second big jump of the night: the “please kill me” woman. Half the boys were watching her through the cracks between their fingers.

They liked Ripley, Hicks, Frost, Apone, Bishop the android, and even Hudson, whose defeatism irritated them so much that I think they would’ve hated him if he weren’t so funny. “Somebody shoot that guy,” one said. Frost insisting that “it doesn’t matter” when the “poontang” is Arcturian confused a couple of kids. “It means he’s bisexual,” one explained. The cigar-chewing Sgt. Apone’s oddly musical phrase “assholes and elbows” got the biggest laugh of the evening; two hours and twenty minutes later, the kids were quoting it as they brushed their teeth. Frost’s quip, “What are we supposed to use, man, harsh language?” made my son laugh for nearly a full minute.

During the final alien assault (where they come through the ceiling panels!) a boy half-hidden under blanket said, “I would commit suicide if I were in this position.”

Vasquez was the MVP of the movie. I think all eight boys might have a little bit of a crush on Vasquez. When she shot the alien under her boot, one exclaimed his delight with profanity, then immediately apologized to me for it. Another boy said Vasquez reminded him of “this lady who works at Costco.” He didn’t say which Costco. There was a of applause for Lt. Gorman and Vasquez holding hands as they blew themselves up. (“She died like a boss,” one said.)

There was general agreement amongst the boys that they would like to see a separate film of Newt surviving for weeks on the planet full of aliens. The final duel between the queen mother alien and Ripley in her power loader was a big hit. the boys applauded both combatants’ tactics, especially Ripley blocking the queen’s tongue-mouth jabs with a blowtorch. (“This is like boxing, except it’s slower and they’re both wearing armor.”)

At bedtime there was some discussion of whether an army of predators could beat an army of aliens. The issue was never resolved. The boys had trouble settling down because every few minutes somebody would plant a palm on somebody’s face or grab a toe. At one point, post-screening discussion was hijacked by a science minded boy describing his idea for an “acid-proof Colonial Marine uniform.”

“There could be face huggers hiding under the couch right now,” one said after a while. There was laughter at this. Then silence. Then a stray nervous chuckles. Then a longer silence. The boy who earlier had suggested alternatives to “Aliens” asked the first boy to “just shut up about the face huggers.”

I very rarely wish I could be 11 again, but for these kids, I’m making an exception.