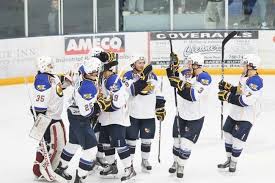 This past weekend was a good one for hockey, and for the Fort MacMurray Oil Barons as well although the team did have some setbacks as well. Friday the local hockey team won against the Lloydminster Bobcats 3-0, but on Saturday they lost to the same team they beat a day earlier with a final score of 4-2. According to Curtis Hunt, the head coach for the Fort MacMurray Oil Barons, “I think we’ve got enough talent, but hard work beats talent every day of the week so until our guys get prepared to play the kind of game we need to play — predictable within our group, short support, good communication, pucks in like we did last night — it won’t look good for us.”

The victory Friday did not last long for hockey’s Fort MacMurray Oil Barons. Saturday MOB lost to the very same Bobcats, showing that neither team is truly ready for the playoffs just yet. Gary VanHereweghe, head coach for the Bobcats, said “After the game we had here last night, we weren’t even close in relation to competing and where you have to be to play in the playoffs. We knew coming in if we were going to get second place, we were going to have to win it, we were going to have to earn it. That’s the only way you want to get it.” The Oil Barons will have to work harder if they want to reach the top this season, and they had a good weekend but it was not great because of their loss to the Bobcats on Saturday.