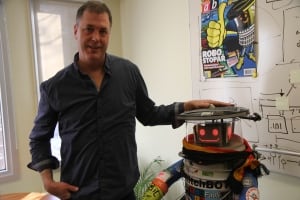 The twin of HitchBOT, a hitchhiking, social media maven robot, is back from a jaunt around Germany. About 10 days after making the return flight, its LED face lit up with a signature wink Thursday morning.

And the German-touring HitchBOT has souvenirs dangling from its neck and pool-noodle appendages like a teen backpacker returning from a European adventure: A miniature beer stein, a black-yellow-and-red scarf, an autograph from a footballer.

It stopped for beers at the famous Hofbräuhaus in Munich, hit the Rose Monday parade and the cathedral in Cologne, kissed a bride at a wedding near Frankfurt and thumbed its way to Neuschwanstein.

The German adventures of the robot, whose sibling made its way across Canada last summer, were filmed for a documentary on the German broadcaster ProSiebenSat1’s show Galileo. As the adventures have been covered in the media, interest has grown.

“People obviously know that they’re not really talking to a robot. Reasonably, we know that the animacy, the vital kind of living-ness that we have, is absent, is algorithmic,” Smith said. “But I think we have these two kind of levels. With our reasoning heads, we know. But it’s convenient, fun and somehow a delight to suppose that there’s that kind of magic happening.”

The project has netted some unexpected spinoff opportunities for the researchers.

HitchBOT has been invited to come to the Netherlands, and is planning another secret “major adventure” that Smith wouldn’t hint at more than that. A First Nations group has asked the researchers to consider building a conversational robot that could help translate endangered aboriginal languages to teach them to younger generations. And aerospace industry researchers have shown interest in the project as a means to be more sociably accessible, Smith said.

The robot is made of simple materials — a bucket body and pool noodle appendages with its feet tucked into rubber boots. It speaks through a tablet app and has a few facial expressions that light up in red LEDs. Its power comes form solar, and a cord that can be plugged into a wall socket or a cigarette lighter.

Smith knew the experiment could lead to the robot disappearing along the way, dependent on strangers picking it up, plugging it in and taking care of it.

He hoped the project would spark introspection about how society works: “What kind of people are we? Are we kind? Do we live in a safe world, you know for the most part? What are the possibilities for these kind of artificial agents in the future?”

Smith wasn’t expecting to hear criticism from the scientific community of his artistic, social project — people saying things like “How is this science?” or “You aren’t really doing anything innovative here.”

Smith said those questions came more often than he expected as HitchBOT headed on its international adventure.

“This is an art and technology and design project,” he said. “It doesn’t matter how often we say, ‘This is an artwork.'”

He said he knew he was “in the sweet spot” when artists began asking that “How is this art?” questions on the other end.

‘We send robots to do dangerous things’

Social researchers, Smith and Zeller were curious to explore something fraught with social perception of fear. There are some instances where hitchhiking is actually dangerous, Smith said. But he doesn’t think that’s the rule.

“We send robots to do dangerous things,” Smith said. “Hostile environments like the surface of Mars, minefields, bomb disposal, undersea stuff. And I thought, OK, why not send a robot to do something that is perceived as dangerous, like hitchhiking.”

A figurative painter and artist before he returned to academia to explore media and culture, Smith is excited about art happening in less “cloistered” realms.

That excitement crystallized when he and Zeller were introducing HitchBOT to the public at the start of its journey in downtown Halifax’s NSCAD Gallery.

“We were inside the gallery. The gallery was open. Hundreds of people out doing their thing out on the waterfront. Frauke and I were sitting there, HitchBOT’s there. And there’s like nobody there. It’s a mausoleum. It’s dead.”

When they took the robot outside, “exactly 20 feet away” but outside the gallery walls, the reaction was immediate.