The researchers found that green hermit hummingbirds had much greater success than humans or other hummingbirds at pollinating a plant called Heliconia tortuosa. (Matthew Betts/Oregon State University)

When it comes to sex, most plants aren’t picky – they’re happy to take just about any pollen that lands in the right spot. But Canadian scientists have found a tropical flower that’s surprisingly fickle. Heliconia tortuosa has encounters with many kinds of pollinators. But it only puts out after an encounter with just the right kind of hummingbird.

Despite being a plant, it seems to have found a way to recognize two preferred pollinators, the green hermit hummingbird and the violet sabrewing hummingbird.

“It’s pretty interesting,” said Adam Hadley, one of two biologists from New Brunswick who made the discovery. He noted that being choosy is something we mostly associate with animals, not plants. “It’s almost like decision-making behaviour.”

‘We’ve sort of almost thought about it as some kind of hummingbird foreplay that’s required.’- Adam Hadley, University of Toronto

The species that Hadley studied is from Costa Rica, where it’s considered a “keystone” species – a crucial part of the ecosystem that the entire food web depends on, especially pollinators like hummingbirds.

Hadley, now a postdoctoral researcher at the University of Toronto, and fellow New Brunswick native Matthew Betts, an associate professor at Oregon State University, were trying to find out how deforestation was affecting the interaction between the plant and the hummingbirds that pollinate them. The hummingbirds tend to avoid clearings that separate fragments of forest more and more as trees are cut down.

As part of their research, they wanted to hand-pollinate a group of plants, which they thought to represent the maximum possible amount of pollination. They intended to compare that to hummingbird pollination in smaller and larger patches of forest.

Unfortunately, the plants weren’t having any of it.

“Our pollination… would barely work at all,” Hadley recalled.

But the plants were surprisingly co-operative when it came to hummingbird pollinations. 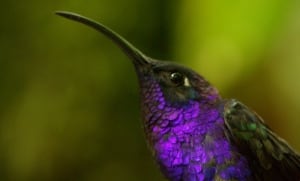 The violet sabrewing hummingbird is one of two pollinators that seems to be preferred by the plant Heliconia tortuosa. (Matthew Betts/Oregon State University)

At first, the researchers wondered if the hand pollinations had been a little too rough and had damaged the flowers.

But controlled experiments in an aviary showed that the hand-pollinated flowers were perfectly fertile – provided they got a little attention from a green hermit or violet sabrewing hummingbird afterward.

The researchers also found out that some other kinds of hummingbirds didn’t have the right touch.

They realized that the two special species had long, curved beaks that can reach deep into the flowers and suck out more nectar than the other species. Could that be how the flowers were identifying them?

To test that idea, the researchers used a long pipette to extract nectar as they hand-pollinated the plants. Sure enough, the flowers were fertilized.

Hadley and his colleagues think it may be advantageous for the plants to choose pollen from only their favoured hummingbirds. Those species tend to carry pollen from longer distances than other species of hummingbirds, reducing the chance of inbreeding and resulting in healthier offspring.

He says it’s the first time this kind of choosiness has been observed in a plant. But he suspects it may not be the only case. Many researchers have reported problems with hand pollinating certain plant species, but they always think that has to do with not using the right technique to apply the pollen.

“Looking back on some of those,” he said, “potentially, it may be more widespread.”

The research, co-authored by Betts, Hadley and John Kress at the Smithsonian Institution, was published Monday in the journal Proceedings of the Natural Academy of Sciences.