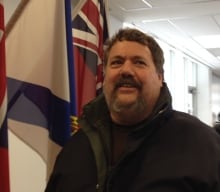 A Canada Revenue Agency facility in Ottawa that a former electrician has called out over asbestos issues does not meet current building code regulations for fire safety and has other deficiencies, according to government documents obtained by CBC News.

The revenue agency’s Ottawa Technology Centre at 875 Heron Rd. had enough issues that a 2006-07 report — released by Public Works through access to information requests — stated that “significant life safety requirements are lacking” at the facility.

‘At the end of the day … it’s the employer’s obligation to provide [employees] a healthy and safe workplace.’— Bob Kingston, national president of Agriculture Union

This building, owned by Public Works and used by the revenue agency, is classified as a highrise.

National building code standards put in place 20 years ago call for such a building to have a complete sprinkler system on all floors throughout the facility, but the Heron Road facility does not.

Government safety reports confirm the building has not been completely retrofitted with a sprinkler system because of asbestos contamination. Any renovation would require operations throughout the facility to be shut down.

It is not uncommon for asbestos to be present in a building this age, a spokesperson with Public Works said in an emailed statement. The ministry said that when new issues are raised, tenants and the occupational health and safety committee are informed, as well as contractors.

Questioned about the lack of sprinklers, Public Works said in a statement, “When the building was constructed, it was compliant with applicable code.… There is no requirement to retroactively address code changes until such a time as major renovations are undertaken.”

“The building located at 875 Heron is safe for occupancy,” according to the statement, which also noted that an October 2014 report raised “no urgent or dangerous situations.”

Denis Lapointe worked at 875 Heron Rd. for 16 years. He recently found out that he may have been exposed to asbestos during his work there.

Lapointe said his former employer refused to give him answers about his potential exposure, so he used the access to information process to collect years of asbestos assessments and management reports for the building.

The more Lapointe learned about the building, the more he became worried about other workers, he said.

“When I saw it the first time, it was in a building condition report, which talked about the national building code and fire code from 1995. You have to question, why are certain things being put off?” said Lapointe.

Agriculture Union national president Bob Kingston says the federal government needs to be doing its job as an employer to provide a safe workplace. (CBC)

CBC has learned that a health and safety officer with Labour Canada is currently investigating air quality, the presence of asbestos and “life safety deficiencies” at 875 Heron Rd. The inspector plans to visit the building in the next few weeks.

Originally, there were plans to completely retrofit the buildings in 2011-12, but that was postponed until 2015-16.

In a statement, Public Works officials said the department is “developing a plan to rehabilitate the building. The timing is not yet determined.”

Bob Kingston, the national president of the Agriculture Union — a part of the Public Service Alliance of Canada — said the government’s answer isn’t good enough.

“At the end of the day, as far as the employees go, it’s the employer’s obligation to provide them a healthy and safe workplace,” said Kingston.

A 2010-11 Public Works “management analysis” document that provides a detailed analysis of the building shows its mechanical equipment is about 45 years old and obsolete.

“The second largest area of concern is complete replacement of the [heating, ventilation and air-conditioning] systems with a more modern and efficient system,” the report says.

“The entire complex should be sprinklered in order to meet 1995 national building code requirements.… [The Human Resources Department] should be consulted to accept existing conditions. It would be expected that the building would be fully sprinklered as part of the major retrofit forecasted for 2015-16,” the report says.

When asked about current plans for asbestos abatement at federal buildings throughout Ottawa, Public Works officials responded: “No specific plans have yet been development related to asbestos removal in buildings waiting for major renovations, as they are still in preliminary planning phases.”