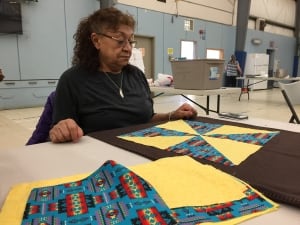 Métis elder Yvonne McCallum has never really welcomed Big Oil into her community, but she accepts how important the energy industry has become to her people.

McCallum is the youngest elder in the community of Conklin, Alta, where her family has lived for several generations.

For the 350 residents of Conklin, the oilsands are overwhelmingly the main employer. Oil prices have plunged by 50 per cent in the last year.

‘A lot of assessment is being made on any future work that we had’- Nicole Bouchier, CEO of the Bouchier Group

“The local contractors here are all dependent on [the] industry,” says McCallum.

“When the economy started to go down, we felt it here at this level too. Local contractors started getting letters from the big industry guys asking them to cut back on pricing. But we’ve been pretty much promised that they will keep the local contractors right until the bitter end, provided they still maintain the quality of service.”

Conklin is located near the shores of Christina Lake, about 150 km south of Fort McMurray in northern Alberta, the heart of Canada’s oil patch.

Those companies are all slashing expenses. MEG Energy, for example, had originally planned $1.2 billion in capital spending in 2015. The Calgary-based firm now expects to spend just $305 million, a cut of about 75 per cent. The company nonetheless expects to boost oil production by approximately 19 per cent this year.

Decades ago, people living in the Métis town of Conklin found work in forestry and fishing. When the oil industry moved in, employment in the energy sector began to soar.

Aboriginal groups throughout the region have reaped the financial gain. Conklin signed a 2011 agreement with Cenovus, worth an estimated $50 million over 40 years, tied to the growth of oil production from nearby projects. It’s a royalty of sorts, since the more the company produces, the greater the benefit for the community.

The Fort McMurray area is home to several successful aboriginal-operated companies that service the oilsands industry. Those companies have not been immune to the oil price collapse.

“A lot of attention is being paid to current contracts, working with our clients to look at cost reductions of those contracts,” says Nicole Bouchier, CEO of the Bouchier Group, a construction and maintenance company based in Fort McKay, about 50 km north of Fort McMurray. 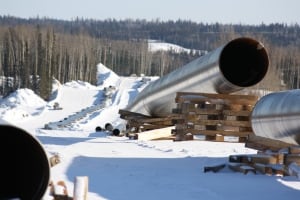 Construction continues in Northern Alberta’s energy sector, including this new Enbridge pipeline in the area between Fort McMurray and Conklin. (Kyle Bakx/CBC)

It’s a change of pace for the company, which was gearing up for substantial growth. Instead, it recently laid off nine employees from head office and dismissed some of its seasonal workers much earlier than normal.

But Bouchier says 2015 could still be a growth year if the company’s bids on some new projects are accepted.

“You are seeing a lot of people uneasy and a little nervous because they don’t know what the downturn in the economy will mean in the long term,” she says.

“At the same time, you see local folks that have been here a long time, it’s a bit of a refresher to have the community slow down. It was going at such a fast pace and I think this gives everyone the opportunity to slow things down and bring things into perspective.”

In Conklin, people continue to discuss the price of oil, but for now they are able to make ends meet.

The oilsands companies not only provide jobs, but they also spend money to enhance education and other programs in local communities. Conklin is surrounded by steam-assisted gravity drainage (SAGD) oilsands operations, which use steam to extract buried bitumen.

McCallum wonders what long-term environmental impact the oilsands will have to the land and water. It’s too late now, she says, to raise a fuss.

“It’s something that is here now, we have to deal with it. We can’t squawk, we can’t chase anyone away, we just have to live with the fact we are the most impacted people as far as SAGD goes in North America. That’s my opinion, but I don’t think anyone would disagree.”​ 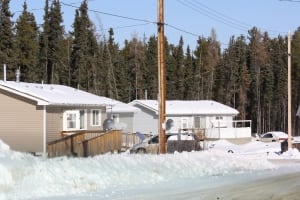 About 350 people live in Conklin and the surrounding area. (Kyle Bakx/CBC)

The small town has a handful of roads, connecting the few dozen homes to the gas station, post office and community centre. The community school is in a large log cabin, while the high school is in a one-room modular building recently donated by an oil company.

“I can’t say we feel it very bad, we still go about our daily business,” says Shirley Tremblay, president of Conklin Métis Local 193, which represents the people in the community. “I think everyone is still doing what they used to do. I don’t think they have slowed down too much.”

Nobody seems to have heard of anyone in this community being laid off since oil prices began to crash last summer.

The financial impact may still not have been fully felt.

As Tremblay bluntly points out, oil industry employment “is a biggie.”