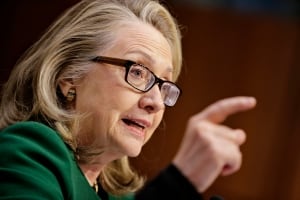 A New York Times report about Hillary Clinton’s email habits kicked off a controversy last week and raised a lot of questions for the former U.S. secretary of state. Clinton has said little and as a result many of those questions remain unanswered and the story, more than a week later, is still providing fodder for debate in Washington and beyond. Here’s what you need to know:

The New York Times revealed that Clinton used a personal email account only instead of a State Department one to conduct government business during her four-year tenure as secretary of state. So what? Well, the rules at the time were that personal accounts could be used, so long as the correspondence was turned over so that it could be preserved for official government records. Clinton and her staff did not ensure that this happened. They did not forward any emails to the State Department at the time.

The existence of a personal account came to light because of a Congressional committee investigating the 2012 attack on the U.S. compound in Benghazi, Libya, that was demanding Clinton’s emails last summer. Then the State Department asked several former secretaries of state last fall for any pertinent emails sent from personal accounts as part of an effort to get its records in order. Clinton gave the department more than 50,000 pages of emails in December, some were given to the Benghazi committee.

2. Why is it a big deal that she used a personal account?

There are a few reasons why it is a problem. For starters, she may not have used it in accordance with the rules. Second, Clinton has been picking and choosing which emails to forward to the State Department and her critics find that problematic.

Third, using a personal account exclusively threw a wrench in the freedom of information process. A journalist seeking records on a certain topic, for example, might not get anything back from a State Department database search because the emails weren’t captured. It depends who she was emailing.

Hillary Clinton testified before a committee in January 2013 on the Benghazi attack that killed the American ambassador. The committee’s investigation is one reason why Clinton’s personal email account use came to light. (J. Scott Applewhite/Associated Press)

Fourth, cybersecurity concerns. We don’t know whether Clinton checked with anyone first about the safety of using a non-government account to conduct government business.

The State Department said it doesn’t appear there is any classified material in the emails but they are going through them to make sure. Again, they are only drawing on the emails that have been turned over to them.

Not only did Clinton use a personal email address, but she used her own personal server, not Hotmail or Gmail, that she set up at home. So that’s leaving people wondering about the extreme effort she went to for privacy.

She hasn’t really given one yet. The New York Times quoted a spokesman named Nick Merrill who said Clinton complied with “the letter and spirit of the rules.” He also said that because she was emailing with State Department staff, she had the expectation that the emails would be retained since they were using their government accounts.

He declined to explain to the Times why Clinton only used a personal account. His response also doesn’t account for the fact that surely Clinton emailed people other than State Department staff. What about those emails?

All Clinton has done to address the controversy herself is to write on Twitter that she wants the State Department to publicly release the emails she gave them.

4. Is Clinton being unfairly targeted?

Clinton is not the only high-level cabinet member to use a personal email account. One of her predecessors, Colin Powell, said on a Sunday talk show that he used one too and that he didn’t keep any of the emails so he can’t turn any over, as per the State Department request. Clinton is the only one who has met the request. 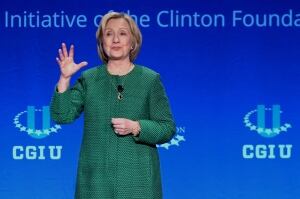 Hillary Clinton spoke at a conference sponsored by the Clinton Global Initiative at the University of Miami on Saturday. She did not make any comments about the email controversy. (Gaston De Cardenas/Associated Press)

Powell, who served under George W. Bush said he mostly emailed State Department staff, so like Clinton’s spokesman said, he assumed they were captured in the system on that end.

Others use personal accounts but Clinton, as the presumed frontrunner for the 2016 Democratic presidential nominee, is under the spotlight and subject to extra scrutiny.

Clinton hasn’t declared her run for the White House, but she is expected to this spring. This whole email ordeal is making some Democrats nervous. They’re worried what else might come up during the campaign that could damage their party. Unlike the Republican Party, there isn’t a big field of potential candidates for the Democrats, she’s pretty much the one they are counting on to carry the torch.

Republicans are of course happy to have more ammunition to attack Clinton with, accusing her of being secretive and a rule-breaker. Whether that will really resonate with voters who are going to the polls 20 months from now, well, probably not. It’s better for Clinton that this is coming out now rather than a week before election day.