There is no bond stronger than that of sisters.

This phrase couldn’t ring more true for Alexis Naylor and Jessica Dennert. The two siblings have similar stories and an unbreakable connection that’s unlike any other.

For one, the two were pregnant at the same time—Jessica gave birth a few days ago, while Alexis is due later this summer. Second, they are both welcoming baby girls into their respective families.

Sadly, the sisters have another thing in common: both of their husbands passed away last year.

In addition to their spouses dying, their father, grandfather, two brothers, uncle and cousin were tragically killed in a plane crash in November 2019.

After hearing the sisters’ story, Jenna Emery—who is also a widow and mother herself—organized a virtual baby shower for Alexis and Jessica.

Speaking to E! News, each woman shared details of how everything came together and why this unique celebration will always have a special place in their hearts.

“It all happened so fast,” Alexis recalls of the virtual baby shower being set up. “[Jenna] messaged us on Instagram and said, ‘Hey, I have a lot of people who have reached out to me and we just want to do something for you. We just want to take a little bit of the pressure that bringing a new baby brings, we just want to take that off of you.'”

“It was great to have that support because we hadn’t had it, but she said I’m not taking no for an answer. Because at first we were like no, that’s too much, we can’t accept that,” Alexis continued. “We were like, ‘Who would donate to complete strangers?’ It just didn’t seem possible, but [Jenna] put together a registry, and the next day she shared it.”

After three days of it being online, Alexis said they had “over 600 things bought for us combined.” 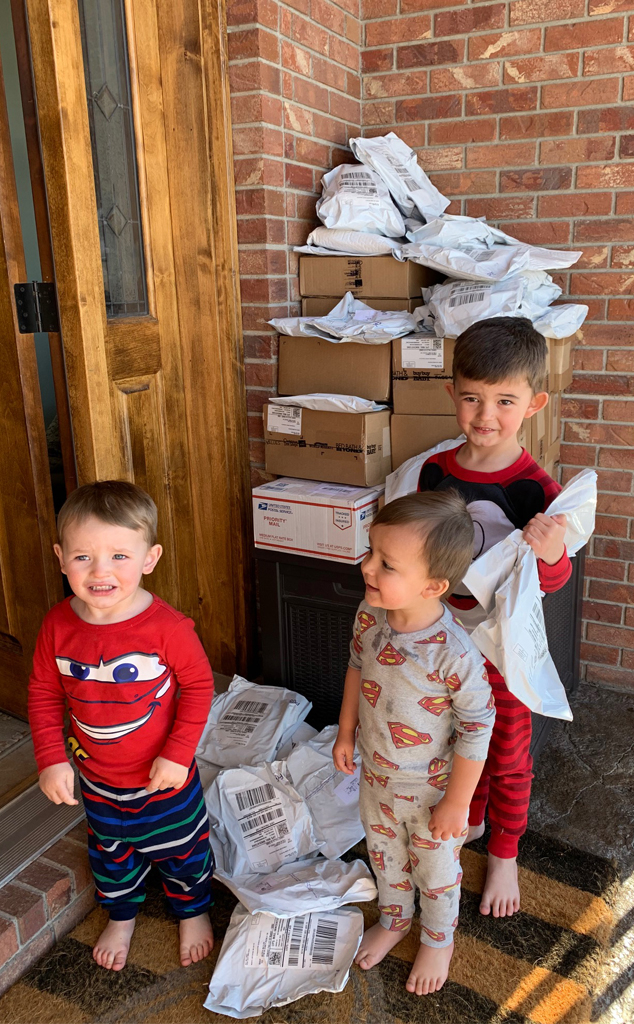 The sisters explained feeling “completely blown away” after receiving so many gifts and having an overwhelming amount of support from strangers. Jessica said stuff from their registry kept going off “really fast,” so they had to keep adding more items.

Their kids have also been enjoying their donations and the virtual baby shower.

“Our kids have loved getting the packages, and they’ve enjoyed it almost as much as we have,” Alexis expressed. “They’re like, ‘This is for my baby sister!’ It’s been a fun family thing as well for us.”

Because of this amazing experience, the sisters plan on telling their kids, “especially the new babies that don’t get to know their dads” about how their virtual baby shower came to be.

“To know that complete strangers were willing to buy them socks, and soap, car seats, strollers… because they just felt this hole,” Jessica shared. “And we can’t help but wonder if our husbands on the other side had something to do with this, that this was a way that they could touch people’s hearts to help support us since they couldn’t be here.”

For Jenna, helping the sisters out was a no-brainer. In fact, she said there was something inside her that just needed to help them out.

“It just hit me so hard, like I couldn’t deny it. I was like, you need to help these girls out,” Jenna remembered thinking, which is how the online registry and virtual baby shower idea came to life.

“I was just thinking if I was pregnant during the time I lost a husband, what would help me the most? And that’s kind of what hit me,” she explained. “That’s the number one thing that could help them or that would be getting them prepared for a baby. ‘Cause when you’re in the grief process, the last thing you want to do is function.”

For Jenna, this kind of thing is what brings people together.

“I think we have a bond now where we will always be in each other’s lives,” she said. “I think we will keep in touch, probably forever.”