Annalise Keating has gotten away with a lot. But it remains to be seen if she’ll escape this sixth and final season with the one thing it always seemed she was after.

“I love the idea that she’s just searching for love and intimacy and whoever will give it to her,” Viola Davis told E! News of the cutthroat attorney and criminal law professor she’s inhabited since 2014. “I love that it’s not coming from a place of damage and being screwed up because I don’t think it’s screwed up. I think it’s an interesting, liberating thought to just seek the person who is seeking you.”

How it will all turn out for Keating, well, that’s a question the folks at Shondaland won’t answer until the final six episodes of ABC’s How to Get Away With Murder play out starting tonight.

Fortunately for Davis, though, her real-life happy ending is already wrapped up.

Though the 54-year-old actress shares few commonalties with her fame-making character (“She’s messy, almost sociopathic, sexual, mysterious, highly intelligent, a big personality. She’s all of those adjectives that are not associated with me,” she told People last fall), a love life in near constant upheaval was once one of them.

Then Julius Tennon answered her prayers. Quite literally, the then-struggling actress having actually put out a spiritual call for help back in 2000. “I was the loneliest woman in the world, and someone said, ‘You should just pray for a husband,'” she revealed to Page Six in February 2013. So she thought hard and asked for “a big black man from the South who looked like a football player.” For Davis, born on her grandmother’s South Carolina farm, he also had to be “emotionally available, someone who was older, someone who maybe had a family before,” she told Essence months later. “Someone from the South. Someone who loves God more than he loves himself.”

Three-and-a-half weeks later, she stumbled across Tennon on the set of the short-lived medical drama City of Angels. A father of two 12 years her elder, he had grown up in Travis County, Texas and played football at the University of Tulsa. Frankly, she couldn’t have drawn it up any better.

Two decades on, the couple are set to celebrate their 17th wedding anniversary this June with 9-year-old daughter Genesis at their side and the Juilliard grad has leapt from sometime guest star on shows like Judging Amy and NYPD Blue to in-demand powerhouse with an Oscar, Emmy and two Tony Awards to her name. No wonder the elementary schooler is eager to follow in Mom’s footsteps.

Davis credits more than a little of her success to the life she built with Tennon. As she put it on the 2017 premiere of the OWN series Black Love, “I always tell people after my first date with Julius, my life got better. In every way. Anxiety went away, fear went away. He just made my life better.”

Good thing he had his ears open that day at craft services.

Having finished their shared scene, “I just overheard her talking to a girl and found her saying, ‘I don’t like L.A. I don’t know anybody here.’ Just kind of complaining. And I was dating a girl who was a little bit of a monster and I was kinda like, ‘Oh, wow. She seems like a nice lady, she doesn’t know anybody. I’m kind of ready to meet somebody else,'” Tennon said on Black Love. “So at the end of the day, I gave her my card.”

Davis’ first reaction, after she wiped away the bagel crumbs, “The only thing I thought was, ‘He’s good-looking. He’s really good-looking,'” she shared in a 2016 episode of The Jess Cagle Interview. Then she felt immediate relief that he wasn’t one of those actors. “He had his shirt on,” she recalled on OWN. “That was a big deal. A lot of actors have their shirts off in their little cards.”

Still, she didn’t immediately accept his offer of a guided trip to the Santa Monica Pier. Having grown up in such abject poverty in tiny Central Falls, Rhode Island that she has talked about digging through maggot-infested dumpsters for food and wrapping bed sheets around her neck at night to avoid rat bites, she was embarrassed of her bad credit and the anxiety she felt over navigating L.A.’s packed streets: “I had to work out some personal issues first.” 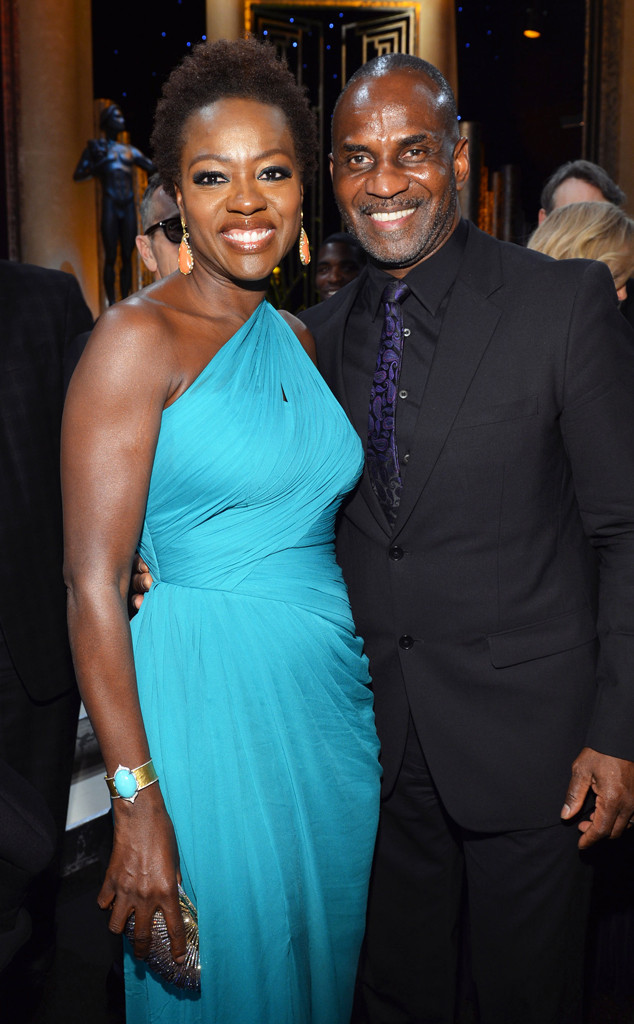 He won her over with one date that took place, appropriately, at church.

Following an incredibly candid evening (“I was terrified, because he told me exactly who he was—he was absolutely honest about his past,” she said on Black Love) he was forthright as he dropped her off at home. “He just said, ‘You are a very beautiful and nice woman, and it was a pleasure spending time with you,'” she remembered. “And he shook my hand.”

Then he called 20 minutes later. “I said, ‘You got home already?'” she shared. “He said, ‘No, I’m at the Ralph’s down the street, but I just wanted to tell you again what a great time I had and what a beautiful woman you are.'”

And another 20 after that. “He called again: ‘I just want to tell you I got home, and you are a beautiful woman. I’m about to go to sleep, and I just wanted to tell you to have a good night,” Davis recalled. 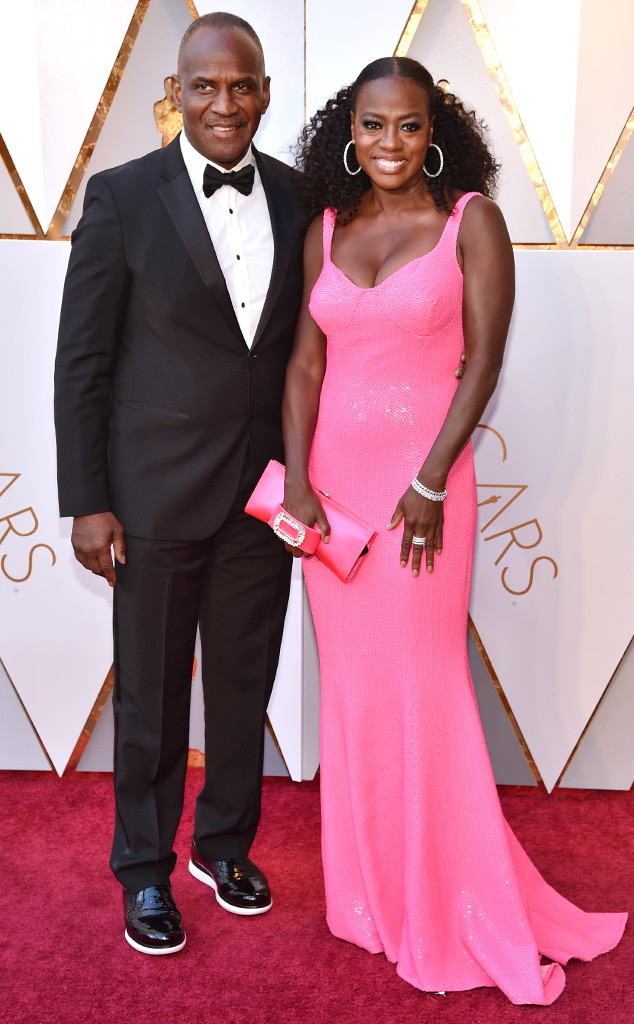 His charms haven’t abated since. Marrying in 2003 first in front of 15 guests at their condo, then with a crowd of 100 in Rhode Island, the pair maintain that loving feeling through frequent acts of kindness.

“It’s about the everyday,” she told People at a 2016 event. “I think that, that’s what people forget when they fall in love with someone and it’s exciting. You have to get back to the everyday–the taking the garbage out, the cooking, the cleaning–and it’s something that I think really works with me and my husband. Every day is like a date.”

Of course some are grander than others. Telling the outlet that it’s the “simple things that are very, very special” she shared that Tennon “just gave me a book. It says, ‘How Do I Love Thee Viola? Confirmations Of Love By Julius.’ I have it in my bag, and I bring it with me every day to work, and each day is another love affirmation.”

Perhaps the biggest romantic affirmation to date, though, came when they decided to renew their vows five years after bringing daughter Genesis into their lives in late 2011. “I wanted to have another ceremony that was pretty where I got to wear the fabulous dress with the fabulous food,” she explained on Jimmy Kimmel Live! So she found a silk embroidered gown by Carmen Marc Valvo and booked a ballroom at Santa Monica’s Hotel Casa del Mar for the evening before Valentine’s Day.

“I love the rituals of weddings. What can I say?” she explained on the Today show. “It’s a time in my life when I feel the most alive and that’s the thing that I don’t always feel that way. I love what I do but sometimes I’m on a sound stage for 17 hours a day and I’m tired and I’m hot but with Julius, it just reminds me of what’s beautiful about my life and I think that’s worth it.” 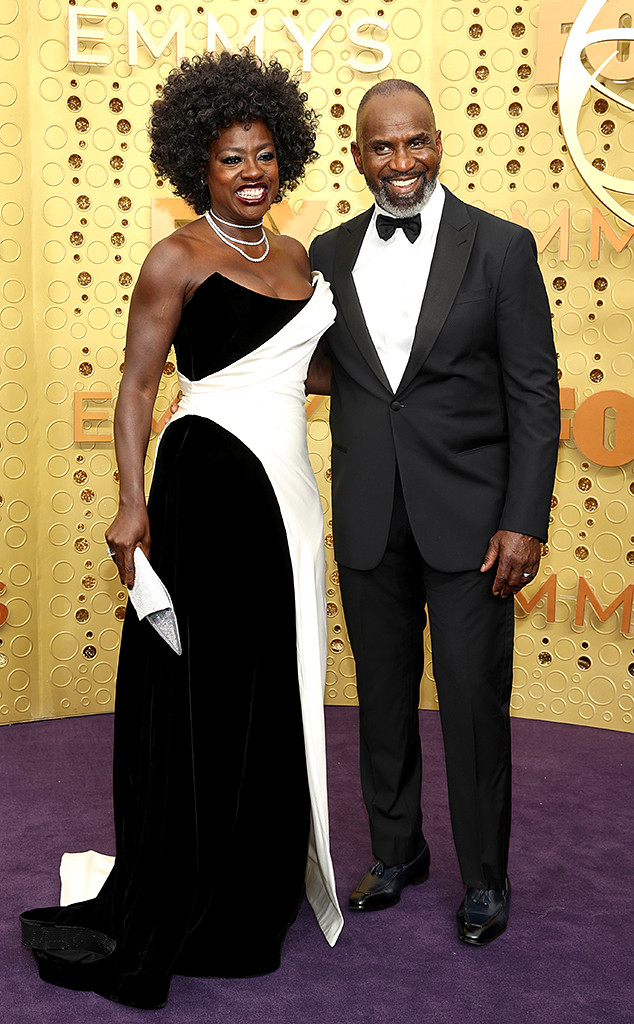 This time around she was able to include the entirety of her How to Get Away With Murder cast and new pal Oprah Winfrey (who came through with an invite to her palatial Montecito spread), trappings of the life they’ve spent the last two decades building together.

“Viola, you’ve just been amazing. Incredible,” he said in a toast shared to social media. “She teaches me every day how to man up, how to agree to disagree but let’s get it done, don’t let the sun go down on your anger.” Continued Tennon, “Some doors have been slammed. Some anger has been exuded. But it’s reconciled. Always reconciled.”

Their next chapter will see her take on Michelle Obama for Showtime’s forthcoming anthology, First Ladies, produced with Lionsgate through their shared company JuVee Productions. “I’m excited,” she told People last year. “I may fail big. But you know what? I’ll live through it. But I do want to honor her in every way I can.”

But first, a much-needed respite. “Does that sound nice?” she asked of the planned vacation, marking the end of her successful HTGAWM run. “Nothing. Peace.”

Thank god she found it. Speaking to research professor and author Brené Brown in 2018, she opened up about a particular breakthrough. “One day my therapist asked me a pivotal question: ‘What if nothing changes—your looks, your weight, your success—would you be okay?’ For the first time, I thought, ‘You know what? Yes, I would. I really would,” she shared.

Of course it helped that she had a partner to remind her just how fantastic she was. “I also got married to an amazing man who really saw me,” she continued. “He was my gift for working so hard on myself.”