Raise your hand if you saw that one coming.

Weeks after Justin Chambers stunned Grey’s Anatomy fans with the revelation that he was departing ABC’s long-running medical soap after 16 seasons, the show finally revealed exactly where beloved doc Alex Karev, who has both a wife and a best friend adrift in Seattle in his absence, has run off to. And if you had “reunited with Izzie (Katherine Heigl) to raise their twin son and daughter that she’d been raising in secret for all these years” in your office pool, then it was your lucky night.

Chambers’ sudden departure meant that showrunner Krista Vernoff and her writing staff really had their work cut out for them in crafting a satisfying send-off for a character who’s been around since day one. How do you pull that off when you don’t have the actor available to bring the story to life? That remains to be seen. Would he get a fully happy ending? As fans of Grey’s know all too well, Shonda Rhimes & Co. don’t hand those out all too often.

While he got one, poor Jo (Camilla Luddington) didn’t, unless you consider Alex’s shares in the hospital a worthy consolation prize to your husband ghosting you to join a family he didn’t know he had.

Now that we’ve said our big goodbye to Alex, we’re looking back on all the ways Grey’s has gotten rid of main characters over the years. And the leading cause of departure just may surprise you…

The Deaths: As you can see in the chart below, with Riggs’ move down south, there’s now a tie for leading cause of departure between dead and moved when the Grey’s Anatomy writers write a main character out of the series. Of course, on the dead side, we have T.R. Knight‘s George O’Malley, who was the show’s first series regular to die, after George was shockingly hit by a bus in the season five finale.

Knight said he asked to be written out after a gradual “breakdown of communication” between Rhimes and himself that began with former co-star Isaiah Washington (more about his departure in a second) used a gay slur on set in reference to Knight and was subsequently fired, which led to a lack of screen time and pressure against his coming out of the closet.  “There just comes a time when it’s so clear that moving on is the best decision,” he told Entertainment Weekly at the time.

Rhimes disputed Knight’s claims, especially that she pressured him to stay in the closet. “”I said, ‘If you want to come out, that’s awesome. We’ll totally support that.’ And then he went away, thought about it, and came back and said, ‘I’m going to make this statement,'” she told the magazine.

The next major main character deaths would come courtesy of season eight’s big plane crash, which claimed the lives of both Chyler Leigh‘s Lexie and Eric Dane‘s Sloan. As Leigh told E! News at the time, she’d decided season eight would be her last. “I met with Shonda and we worked together to give Lexie’s story appropriate closure,” she said. Rhimes echoed that on Twitter, writing, “We had a lot of thoughtful discussion about it and ultimately we both decided this was the right time for her character’s journey to end.”

Dane’s fate was kept up in the air all summer long, though his departure from the series had already been announced. In July of 2012, Dane and Rhimes confirmed his impending exit, with Rhimes telling TVLine that the actor “did not come to this decision lightly, but after much consideration and conversations, he and I have decided that this is the right time for his storyline to end.” He appeared in two episodes of season nine before his character succumbed to his injuries and passed away.

The show’s next main character death, arguably its biggest one ever, would come two seasons later when Patrick Dempsey‘s Derek Shepherd was killed off in a surprising fashion after 11 seasons as the show’s male lead. After rescuing stranded motorists from a car accident right before their car exploded, Derek stopped briefly in his car to answer the phone and was struck by a semi-truck and declared brain dead before Meredith (Ellen Pompeo) could get to the hospital to say goodbye.

Dempsey had been vocal about wanting to leave the series, but had just signed a new two-year deal to keep him on the show through season 12, so Derek’s death really came out of nowhere (despite being spoiled 30 minutes before the episode aired). “It just sort of evolved. It just kind of happened,” he told EW at the time. “[Being written off] was something that was kind of surprising and uh, just naturally came to be. I like the way it has all played out.

For Rhimes, killing Derek was the only way she could see a future for the show without Dempsey on it. “The decision to have the character die the way that he did was not a difficult one in the sense of what were the options?” she told reporters at the 2015 Summer TCA press tour. “Either Derek was going to walk out on Meredith, and leave her high and dry, and what was that going to mean? That was going to suggest that the love was not true, the thing we had said for 11 years was a lie and McDreamy wasn’t McDreamy.”

“For me, that was untenable,” she continued. “Because I really couldn’t have the idea that he just turned out to be a bad guy who walked out on his wife and kids be a true story. To me, it felt like that was the only way to make Meredith and Derek’s magic remain true and forever frozen in time.”

The Fond Farewells: The first main character who got to simply move away, usually for some sort of happy ending, was Sandra Oh‘s Cristina Yang. Another OG cast member like Dempsey, Oh announced ahead of the season 10 premiere that the season would be her last, giving fans time to say goodbye to the character. “Creatively, I really feel like I gave it my all, and I feel ready to let her go,” she told THR at the time. “It’s such an interesting thing to play a character for so long and to actually get the sense that she wants to be let go as well. [Cristina] wants to be let go, and I am ready to let her go. We have to start the process, story-wise, for the Grey’s writers to think of why she’s going to go.”

Rhimes would eventually send Cristina off to Zurich, Switzerland, where Preston Burke (Washington), the man who once left her at the altar, was running a hospital and looking for his replacement, offering her his job as head of the hospital. And in her departure, she took Gaius Charles‘ Shane Ross with her.

Sara Ramirez‘s Callie Torres would get the next move, at the end of season 12, when she decided to follow her girlfriend Penny across the country to NYC. “I’m deeply grateful to have spent the last 10 years with my family at Grey’s Anatomy & ABC but for now I’m taking some welcome time off,” Ramirez tweeted the night her final episode aired. “Shonda’s been so incredible to work for and we will definitely continue our conversations! I send my Love to Ellen, the rest of the cast & crew, and I look forward to always being a part of the Shondaland family!”

When Jessica Capshaw was written out of the series two season later, her Arizona Robbins had reconnected with ex Callie, now split from the GF she followed across the country, and would move to the Big Apple herself to reunite her family. Similarly, when quasi-Dempsey replacement Martin Henderson departed that same season after two as a series regular, his Martin Riggs was allowed to follow a long-lost love down to California to live happily ever after.

The Ghosts: While other characters were written out by either being fired (Kim Raver‘s Teddy—though, she’s since returned as a series regular once again—and Tessa Ferrer‘s Murphy), quitting (Sarah Drew‘s April, Jerrika Hinton‘s Edwards and Brooke Smith‘s Hahn), or, in the case of lucky Kate Walsh, whose character Addison landed her own show, being spun-off, there was one method of departure that Rhimes seemingly reserves for only her most tense actor-creator relationships. We’re talking about Burke and Izzie’s (Katherine Heigl) complete and utter ghosting.

After Washington found himself persona non grata amongst much of the cast during the third season when a rumor surfaced that he’d referred to still-closeted Knight by a crass gay slur during an argument with Washington, he made matters worse back stage at the 2007 Golden Globes after the show won Best Drama when, fielding press inquiries, he said, “No, I did not call T.R. a f—-t.” In the season three finale, Burke would leave Cristina at the altar, taking all his belongings from their apartment, and not be seen or heard from for quite some time thanks to ABC’s decision to terminate him in June. He would later reprise his role during Oh’s farewell season, with Burke popping up to offer Cristina her happy ending. 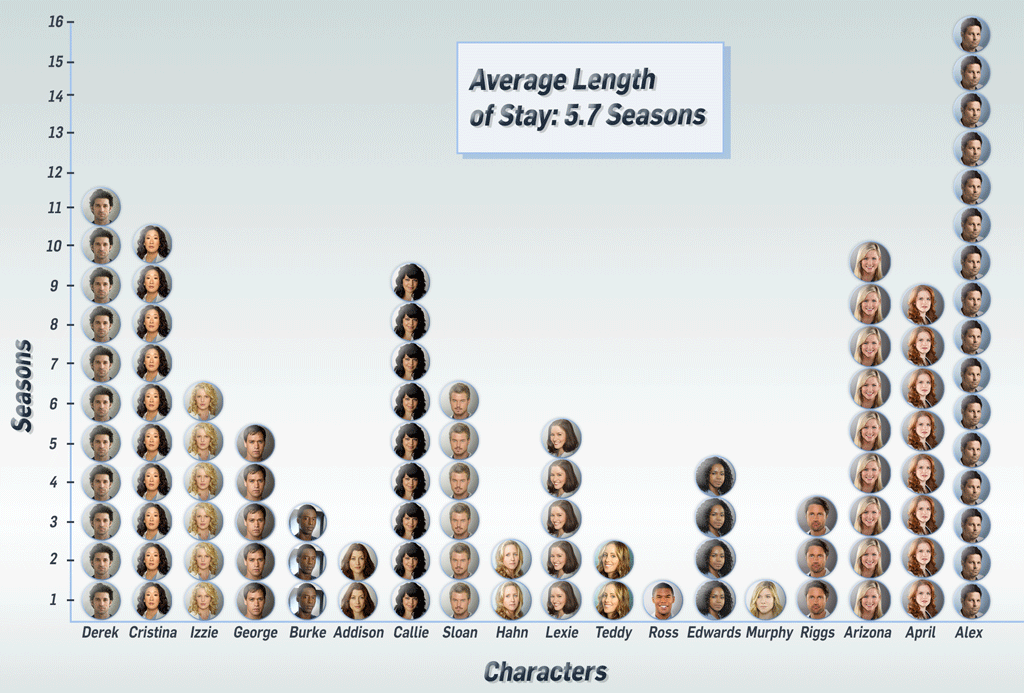 The beginning of Heigl’s end came when, after the 2008-09 season, she refused to submit herself for Emmy consideration, claiming she didn’t feel the material she’d received warranted a nomination. While Rhimes downplayed the slight, many expected that Heigl would be killed off when Izzie was diagnosed with Stage 4 metastatic melanoma. She would survive and marry Alex (Justin Chambers), only to return very sporadically in season six, finally requesting to be released from her contract 18 months early. The last words she would ever utter on camera were in response to Meredith asking her not to leave, reminding her this is her home. “No it’s not,” she says. “Not anymore. It’s just a place I worked and I can do that anywhere.”

Over the years, Heigl would flip flop on whether she was open to returning to the series to offer some closure to the character, initially telling MTV in 2010 that it would “just feel manipulative.” She changed her tune in 2012, however, telling E! News, “I told them I want to…I really, really, really want to see where [Izzie] is. I just want to know what happened to her and where she went and what she’s doing now.”

Rhimes, however, isn’t here for it. “No,” she told TVLine in 2015. “I’m done with that story. I’ve turned that idea over in my mind a thousand times and thought about how it would go. And I don’t think so.” And now that the character has been given closure via Alex’s exit, the door seems to be finally, officially closed here, too.

For more hard data on the many major Grey’s exits over the years (18 in total!), including the average length of stay for a series regular, be sure to check out our handy charts above!