What did we do deserve Harry Styles?

That’s the question we’ve been ruminating on ever since the charming pop star kicked off his solo career with the release of his eponymous debut album in 2017, after years spent comfortably ensconced within the confines of the biggest boy band in the world (One Direction, if you’ve somehow forgotten). And it’s one that only seems more pertinent as he prepares to take the stage in Studio 8H in Rockefeller Center as both host and musical guest of Saturday Night Live on November 16. The gig is his biggest promo moment yet as Harry readies the launch of his highly-anticipated sophomore effort, Fine Line, due on December 13, and will certainly allow everyone who may have missed his acting debut in Christopher Nolan‘s WWII film Dunkirk to see the superstar in a new light.

And while we may never be truly sure of what we did to deserve him–or that we even do at all–allow us to count all the ways that Harry is exactly the male pop star we need in these trying times.

He’s not ashamed of where he came from: While most former boy band members trying to go “legit” typically shun their pasts, Harry’s not interested in trying to fully distance himself from his 1D days. “I know it’s the thing that always happens,” he told Rolling Stone in their September cover story. When somebody gets out of a band, they go, ‘That wasn’t me. I was held back.’ But it was me. And I don’t feel like I was held back at all. It was so much fun. If I didn’t enjoy it, I wouldn’t have done it. It’s not like I was tied to a radiator.”

But he’s hoping to constantly evolve: When Harry dropped his first solo single, he stunned us all with the cinematic and nearly six-minute long piano ballad “Sign of the Times,” signaling a clear intention to transcend his pure pop roots. Over the course of 10 tracks, his debut album was an excellent exploration of West Coast ’70s rock. And after releasing the anthemic “Lights Up” as the lead single for Fine Line, all signs point to a further evolution of sound. “It’s not like his last album,” friend and Fleetwood Mac legend Stevie Nicks told The Face in September. ​”It’s not like anything One Direction ever did. It’s pure Harry, as Harry would say. He’s made a very different record and it’s spectacular.”

And always wants them to feel safe and seen with him: Known to wave the pride, bi, trans and Black Lives Matter flags onstage while on tour, Harry says he’s motivated by making the arenas his fans have crowded into to see him a welcoming place for everyone. “I want to make people feel comfortable being whatever they want to be,” he told RS. “Maybe at a show you can have a moment of knowing that you’re not alone. I’m aware that as a white male, I don’t go through the same things as a lot of the people that come to the shows. I can’t claim that I know what it’s like, because I don’t. So I’m not trying to say, ‘I understand what it’s like.’ I’m just trying to make people feel included and seen.”

And fully aware of his privilege: “It’s not about, ‘Oh, I get what it’s like,’ because I don’t,” he told the magazine. “For example, I go walking at night before bed most of the time. I was talking about that with a female friend and she said, ‘Do you feel safe doing that?’ And I do. But when I walk, I’m more aware that I feel OK to walk at night, and some of my friends wouldn’t. I’m not saying I know what it feels like to go through that. It’s just being aware.” 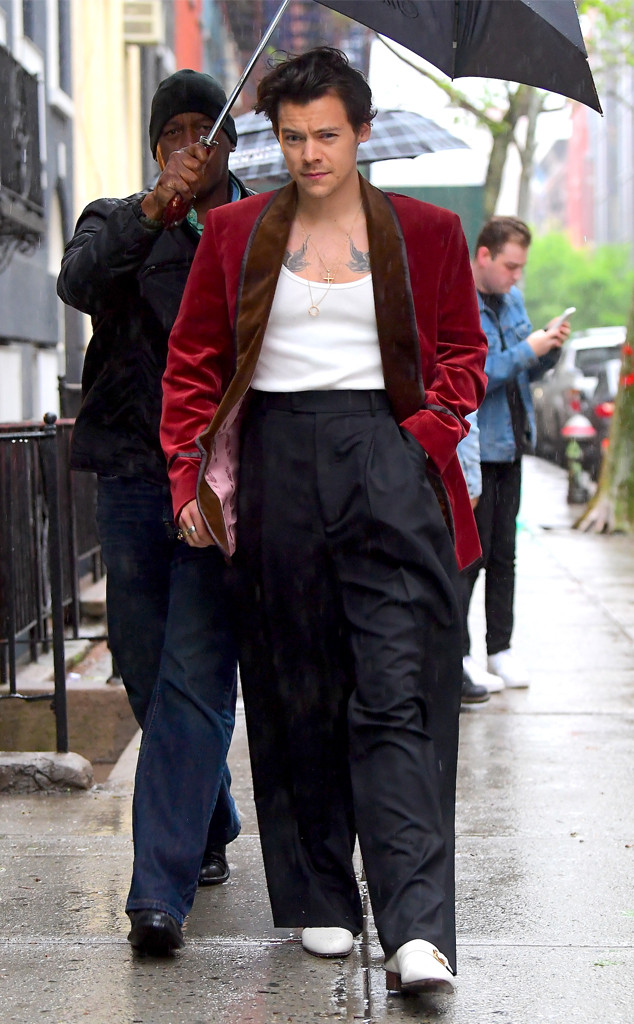 He’s not a clout-chaser: “It’s not about me trying to champion the cause, because I’m not the person to do that,” he told RS. “It’s just about not ignoring it, I guess. I was a little nervous to do that because the last thing I wanted was for it to feel like I was saying, Look at me! I’m the good guy!’ I didn’t want anyone who was really involved in the [Black Lives Matter] movement to think, ‘What the f–k do you know?’ But then when I did it, I realized people got it. Everyone in that room is on the same page and everyone knows what I stand for. I’m not saying I understand how it feels. I’m just trying to say, ‘I see you.'”

He’s not interested in conforming to rigid gender constructs: Fully a fashion icon, Harry’s style carries a remarkable fluidity with it. And he wouldn’t have it any other way. “What’s feminine and what’s masculine, what men are wearing and what women are wearing – it’s like there are no lines any more,” he told The Face. And in conversation with Timothée Chalamet for i-D in November 2018, he admitted, “I definitely think in the last two years, I’ve become a lot more content with who I am. I think there’s so much masculinity in being vulnerable and allowing yourself to be feminine, and I’m very comfortable with that. Growing up you don’t even know what those things mean. You have this idea of what being masculine is and as you grow up and experience more of the world, you become more comfortable with who you are. Today it’s easier to embrace masculinity in so many different things. I definitely find – through music, writing, talking with friends and being open – that some of the times when I feel most confident is when I’m allowing myself to be vulnerable.”

Nor is he all that interested in documenting his every waking moment online: “On a personal level, I feel a noticeable change in how happy I am when I’m not on social media. Someone once described it to me like a house party, where there are three people who are great and 23 people who aren’t that nice. You just wouldn’t go to that party would you? That kind of summarises my feelings about social media. I dip in. I see the friends I want to see and I dip out,” he told Timothée. “It’s something I learnt over time. Especially starting out, because when you first start, you’re encouraged to give as much as you can. But it goes back to separating work from the rest of your life. Realising that there are things that you need to keep to yourself and things that you don’t have to share with anyone. It keeps everything a little nicer.”

He’s gracious about the gigs that didn’t go his way: After losing out on the opportunity to bring Elvis Presley to life in an upcoming biopic–Austin Butler scored the coveted role–Harry told The Face that, while The King was “such an icon for [him] growing up,” he was ultimately at peace with the role going to someone else. ​”I feel like if I’m not the right person for the thing, then it’s best for both of us that I don’t do it, you know?”

And that goes double for relationships that didn’t last: While he freely admits much of Fine Line was inspired by a romance that fell apart, he remains steadfast in his refusal to name the ex in question. “It’s not like I’ve ever sat and done an interview and said, ‘So I was in a relationship, and this is what happened,'” he told RS. “Because, for me, music is where I let that cross over. It’s the only place, strangely, where it feels right to let that cross over.”

He remains humble despite having every reason not to be: Did you see that smoking hot Rolling Stone cover shoot? Pure fire. And yet, Harry’s hesitant to admit that he’s, you know, quite attractive. “The word ​’sexy’ sounds so strange coming out of my mouth,” he told The Face. “So I would say that that’s probably why I would not consider myself sexy.”

And the music is just too good: We point you to “Lights Up.” And we rest our case.

See Harry take the stage as host and musical guest of Saturday Night Live on Saturday, Nov. 16 live coast-to-coast at 11:30 p.m. ET/8:30 p.m. PT on NBC. And be sure to check out Fine Line when it’s released on December 13.

Biggie: I Got a Story to Tell