Kim Kardashian‘s latest ensemble can only be described by one word: Jeanius!

While attending the WSJ Magazine 2019 Innovator Awards Sponsored by Harry Winston and Rémy Martin in New York City, the 39-year-old beauty mogul shut down the red carpet with her Canadian tuxedo lewk.

The Keeping Up With the Kardashians star skipped her usual body-hugging dresses for something more fun and flirty.

The reality TV personality donned an off-the-shoulder denim top that featured dramatic puffed sleeves and a corset-like silhouette. She also stunned in matching skin-tight jeans that she paired with blue latex thigh-high boots—which can be described as superhero-meets-cowgirl-couture.

All in all, it’s safe to say she’s taken the playful denim-on-denim concept to new heights. And dare we say Wyoming is having an effect on her fashion choices?

The KKW Beauty founder’s glam was also on-point, as she stuck to her signature nude-pink lips and bronzy smoky eye. Her long black hair was also styled in effortless waves.

Of course, her husband, Kanye West, also brought his fashion A-game to the star-studded event. After all, he and Kim were there to present Ricardo Tisci with his award for the night.

“Riccardo had that vision very early on,” the 42-year-old said while presenting the designer with his award. “Anything you liked about fashion or the things you don’t like about it, it’s Riccardo’s fault.” 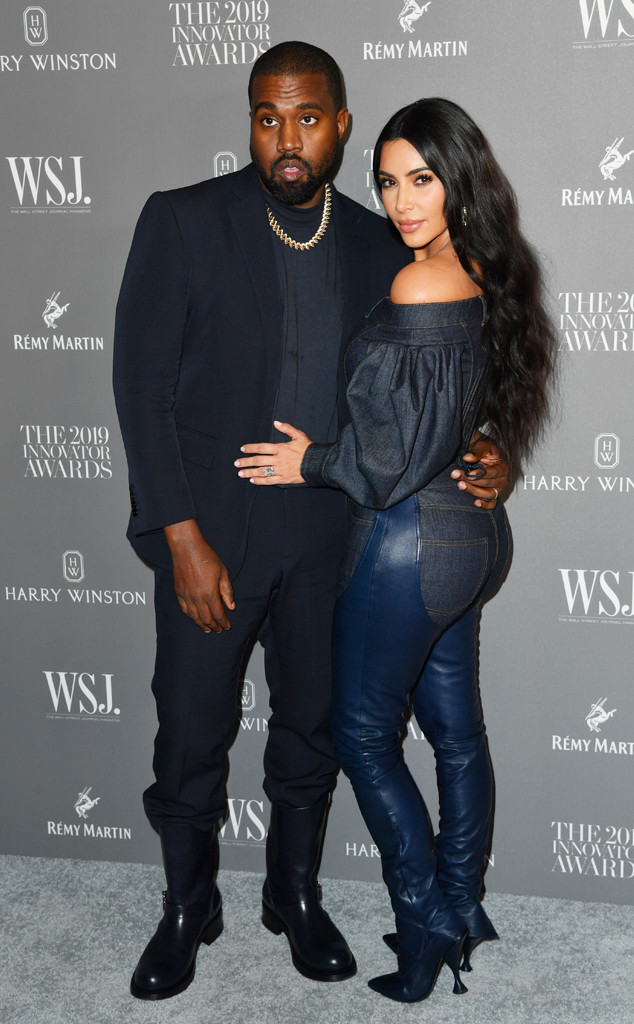 The Jesus Is King rapper also twinned with his wife, as he wore an all-navy blue suit and blouse. He even accessorized with dark blue rain-boots that matched Kim’s shoe color. Throughout the event, the longtime couple also appeared to be over-the-moon in love, and were snapped walking arm-in-arm.

Earlier this week, the KKW Beauty founder opened up about her marriage with the 42-year-old star and how she remains true to herself.

“I’m always going to be me,” she said during an appearance on The Real. “So, we had that discussion and that fight. I think, at the end of the day, that’s what marriage is. He’s going to do things that I don’t agree with and I support him and vice versa. So, with this, we were having this conversation of just what is too much? And, I am a mother of four, like, I am going to be 40 next year.”

However, it’s clear her Canadian tuxedo wasn’t “too much” because she slayed the red carpet with her ensemble. Now, not to end on a cheesy note, but Kim’s fiery denim ensemble proves she was born with good jeans!