When you’re a struggling actor, just starting out in this crazy business of show, there’s but one dream: To land that one role, find that one character that’ll allow you to breakthrough in a big way and put your career on the map.

The double-edge to that sword of success, however, is that when people fall in love with you in a particular role, you can sort of become synonymous with it and audiences find themselves unable–or unwilling–to see you as anything else. This is especially true if you’re lucky enough to find such success on a beloved and long-running TV show, where years of your life are given over one single role. And when the time does come for the show to end, that signature character of yours can be hard to shake, haunting your career like a specter.

Some actors lean into it, either chasing roles that fit the mold or attempting to keep the character alive outright in some way or another. Others do everything in their power to make you forget they ever played the part to begin with. And then there are those who find themselves somewhere in the middle, not quite running from their past, but still finding new and surprising ways to reinvent themselves in the process.

John Krasinski is one of them.

For nine seasons, as Everyman Jim Halpert on NBC’s The Office, Krasinski, who celebrates his 40th birthday on October 20, made us laugh and swoon with a character that, by the end of the show’s run, seemed to be an effortless extension of himself. As Jim pushed back against the stifling limitations of working year after year at a place like Dunder Mifflin, it seemed as though Krasinski, too, was struggling to not be too boxed in by the role that put him on the map. Well before his time on the series came to an end in 2013, he’d already begun pushing himself into new arenas, showing Hollywood that he had more on his mind than simple sitcom stardom. Aside from directing and producing several episodes of his hit show, he also wrote, directed, and produced the 2009 film Brief Interviews With Hideous Men, based on acclaimed author David Foster Wallace’s collection of short stories. And he came this close to landing the role of Steve Rogers in Marvel’s 2011 Captain America: The First Avenger.

“Yes, I put on the suit. Yes, I did the screen test,” he recalled to Men’s Health in 2018. “But I knew they’d offered it to Chris [Evans] like four times, and eventually I got the call. ‘Chris is engaging.’ And I was like, ‘Of course he is! Look at that dude. He is Captain America!’ It’s the way I was brought up—I’ve always been a realist and I respect the situation. You can’t fight against things you can’t control. I remember we were on our way to a party for [wife] Emily [Blunt’s] birthday when I found out. I hung up the phone and [told her], ‘Yeah, it’s not me.’ She was like, ‘Do you want to cancel?’ And I said, ‘No, let’s go.'” 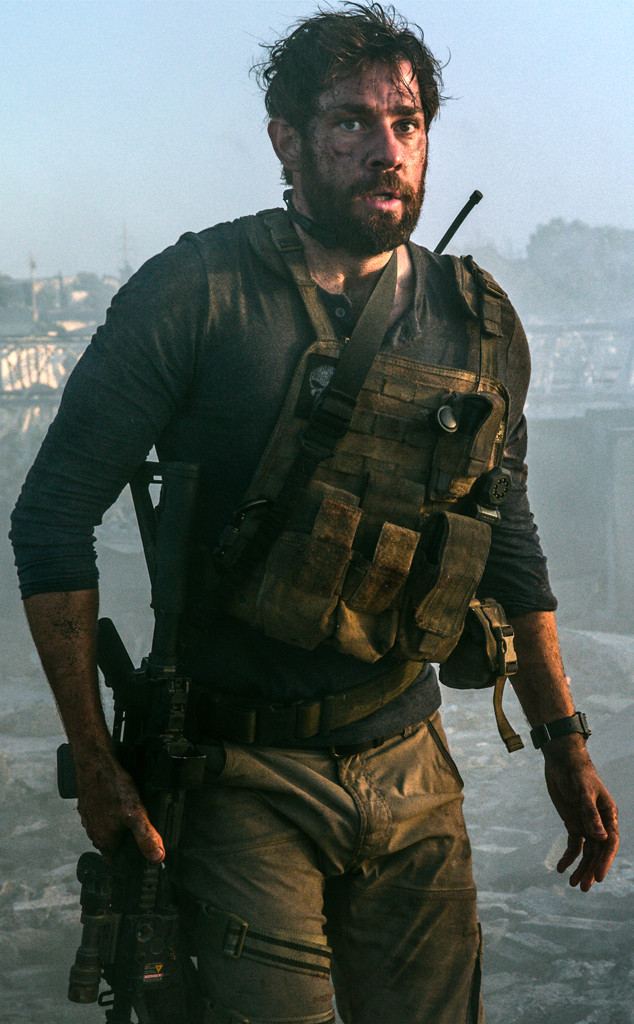 While becoming part of the MCU certainly would’ve been one way to leave Jim Halpert behind, it wasn’t in the cards for Krasinski. And so, when the show ended in 2013, he set out to reinvent himself in different ways. He launched production company Sunday Night and began developing films like Promised Land (with he co-produced, co-wrote and co-starred in with Matt Damon based on an idea he developed with writer Dave Eggers) and Manchester by the Sea (based on an idea he and Damon had that eventually won Casey Affleck an Oscar for the role Krasinski had envisioned for himself) as well as hit TV shows like Lip Sync Battle, based on an idea he, Blunt and Stephen Merchant cooked up for one of his upcoming appearances on The Tonight Show Starring Jimmy Fallon. He was officially a true multi-hyphenate.

In 2016, he would really stun audiences, however, with the lead role in Michael Bay‘s 13 Hours: The Secret Soldiers of Benghazi, a war pic that saw him undergo rigorous physical training to gain 25 pounds of muscle. Who needs Captain America when you can play a real hero? The physical transformation had a profound impact on both his career and his psyche.

“Someone in the Marvel world or the leading-man world said to me, ‘Hollywood can’t imagine you doing it until you do it. And once they see it, it can’t be unseen by them.’ And that’s exactly what happened to me,” he told Men’s Health. “When I went out for Captain America, people were like, ‘Really?’ Then I did 13 Hours, and people are like, ‘Okay, yeah, you can do these roles now.’ I’m like, ‘You don’t care about the acting? You just care about the physical shape?’ And they’re like, ‘Correct.’ Not to get into the whole regime, but on 13 Hours, I did it for the role, and then I definitely got addicted to it. I take periods off. I remember my trainer saying, ‘Try to stay within three weeks, so that whatever part you get, within three weeks we can get you down.’ That’s the goal, to be able to shift back and forth. I think that’s better than saying, ‘Stay ripped your whole life.’ Because that’s really annoying, and the people who do it really easily annoy me. Yes, I’m talking to you, Chris Hemsworth.

“I think mentally, it’s cleared my head for things like directing and producing,” he continued. “Staying really busy. If I didn’t work out a few times a week, I would start to overanalyze. It definitely takes me out of myself for a minute. And it gives me my best ideas. Your brain definitely works better when it’s all lubed up with endorphins and sweat and blood.”

It’s no coincidence, then, that his biggest post-The Office success would come after undergoing such a transformation. We’re talking about, of course, a little thing called The Quiet Place.

In 2018, aside from taking on the lead role in the Amazon Prime original drama Jack Ryan (based on the iconic Tom Clancy hero), he wrote, directed and co-starred alongside his wife in the little horror film that could. Based on a spec script that he wrote to more fully incorporate the themes of parenthood that are so central to the first product, inspired by the birth of his youngest daughter Violet, the film went on to gross an astounding $341 million worldwide on a $17 million budget, cementing Krasinski as a major force in the film world. Naturally, a sequel is due in 2020.

Working on the film with his wife, whom he was initially too afraid to ask to be his leading lady, only helped strengthen their relationship, despite all the advice they received on the contrary. “It without a doubt made our marriage stronger,” he told he Independent last year. “I think we were both surprised by that. Not that I thought it would get worse but we were much more in love after the movie. We leaned on each other in a way we never had. I also certainly wouldn’t have felt as comfortable watching someone else pretend to give birth in a bathtub.”

While Krasinski has come so far from the place he was in when he was staring deadpan into the camera as madness descended around him on The Office, he insists none of it was done intentionally to push the beloved Jim Halpert from the audience’s mind. (And with the show’s insane popularity on Netflix, sparking a bidding war that ultimately saw NBCUniversal fork over $500 million to land the exclusive streaming rights for their upcoming new service Peacock, how could it?) “None of those things were about running away from Jim,” he told Men’s Health. “Jim is one of those things that, I know, at the end of my career, I’ll still be most known for. And that’s awesome. That’s an honor. But I wanted to try different things. I wanted to set myself up to explore things that were scary, and things I wasn’t sure I was going to be good at.”

That said, he’d still leap at an opportunity to revisit the character that put him on the map. “I would totally do it,” he told The Independent about the prospect of a revival. “I can genuinely say I’ve never been in anything like it. I remember bumping into people who’d been on other television shows and were like, ‘So which year did you get sick of each other?’ We never did. It kind of felt like we were in a repertory theatre together. We all look forward to the day we can do it again. Hopefully we can find a way.”

Until then, he’s just reveling the way The Quiet Place has truly opened up the world for him–and grateful that this sort of success came when when it did. “The difference is that I definitely don’t trust that I would be the most mentally stable person if this had happened to me at 27. The fact that I’ve had a career and have had successes and failures that have reshaped the bent metal that is life—that experience grounds me and helps me understand the goods and the bads and the dark corners and all that,” he told Men’s Health. “But more importantly, I know I’ll never do another movie that’s this successful, this original, this underdog-y, and then on top of it have it be with my wife every step of the way.”