14 years ago today,  Demi Moore and Ashton Kutcher exchanged vows in a small ceremony, attended by her ex-husband and close friend Bruce Willis, and the former couple’s three daughters, Rumer, Scout and Tallula.

They were one of Hollywood’s most talked-about couples, thanks in large part to their age difference that some just couldn’t get over. But the two were together for eight years before splitting in 2011 after a cheating bombshell, a time so tumultuous for Moore that it lead to one of the darkest periods of her life, one she’s finally ready to open up about in her new book, Inside Out: A Memoir; fittingly, her documented journey of self-discovery and acceptance comes out on the same date of her wedding to Kutcher.

“I lost me,” the 56-year-old star said of the time period immediately following their split during an interview on Good Morning America earlier this week. “I think the thing if I were to look back, I would say I blinded myself and I lost myself.”

In her memoir, Moore went on to detail just how much she “lost” herself following her split from Kutcher, which she claims came after he cheated on her a second time in 2011.

Along with opening up about breaking her 20-year sobriety by drinking alcohol and using Vicodin (taking up to 12 pills a day, per GMA), Moore also writes about the physical and emotional turmoil she endured, including dropping to just 102 pounds and all three of her daughters cutting off contact at one point.

It all came to a head in 2012, when she was brief hospitalized in Los Angeles after she suffered what was reported at the time to be a seizure-like episode during a party. Following the headline-making incident, Moore checked into a rehabilitation facility, 20 years after going to one, calling that experience “a profound gift.”

“Part of my life was clearly unraveling,” Moore said in an interview with the New York Times about her state of mind during that period of her life. “I had no career. No relationship.”

“I guess the fundamental question that came forward for me was, ‘How did I get here?’ ” Moore said during her two-part sitdown with Diane Sawyer for GMA. “From where I started to what I’ve experienced, where I’ve been, how did I get here?”

And that is what she explores in her memoir, reflecting on her troubled childhood, her relationship with her parents, and the sexual abuse she endured as a teenager as a way to reclaim her own life story.

Given how reclusive Moore has been after her high-profile romance with Kutcher, it’s almost shocking how vulnerable and open she is, both in her intimate memoir and in interviews promoting it.

Moore first met Kutcher in 2003 at a play in NYC, just after her infamous return to acting in Charlie’s Angels: Full Throttle after a five year break. And she admitted to immediately being charmed by the That ’70s Show star, writing, “I just felt like a 15 year-old girl, hoping somebody liked me.”

Their 15-year age difference immediately drew attention—she was 40, he was 25—with some even theorizing it was an elaborate prank for his MTV show Punk’d. (As for the commotion over their age gap? “It’s so silly,” she told Sawyer.)

I was a 40-year-old who had a big life,” Moore reflected. “And Ashton’s adult life was just beginning—I didn’t see all that because I was inside of it.”

By 2005, they were married, exchanging vows in a Kabbalah ceremony at their Beverly Hills home, and in an interview with Harper’s Bazaar just before the wedding, Moore said, “Talk about meeting your soul mate. I truly feel I have been given that gift.”

But after rumors of infidelity on Kutcher’s part, Moore announced in 2011 that the couple was splitting.

“It is with great sadness and a heavy heart that I have decided to end my six-year marriage to Ashton,” she said in a statement at the time. 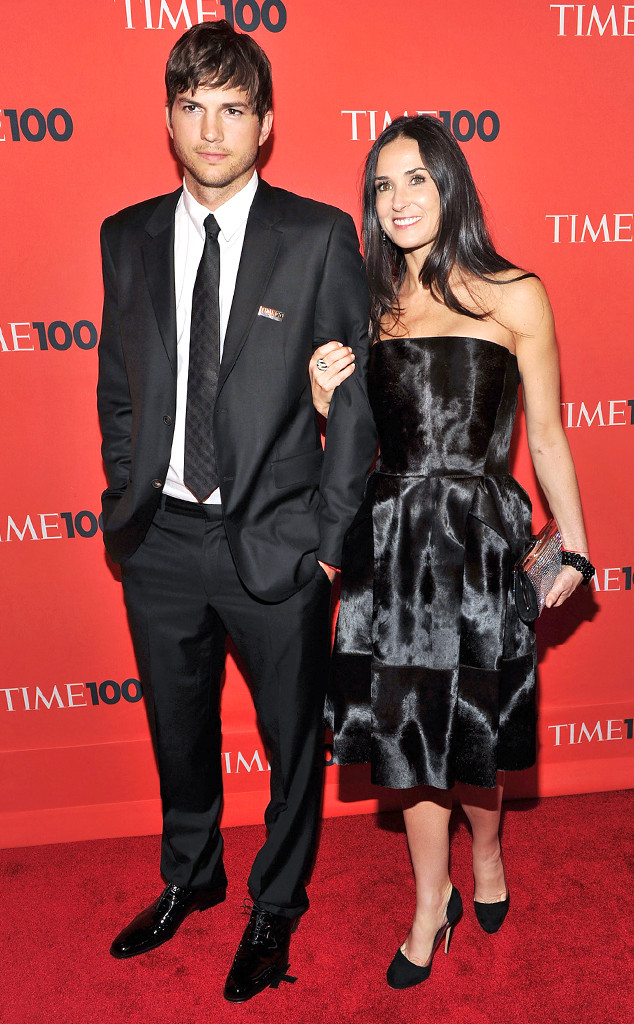 “As a woman, a mother and a wife there are certain values and vows that I hold sacred, and it is in this spirit that I have chosen to move forward with my life,” Moore’s statement continued, seemingly alluding to the cheating claims.

Kutcher issued his own statement, taking to Twitter to address their split: “I will forever cherish the time I spent with Demi. Marriage is one of the most difficult things in the world and unfortunately sometimes they fail. Love and light, AK.”

In December 2012, Kutcher officially filed for divorce. And that was that, with both parties rarely—if ever—speaking about their marriage and its collapse, with Kutcher moving on and finding love with his former That ’70s Show co-star Mila Kunis. The couple wed in 2015 and have two children together.

Bu in her memoir, Moore details the breakdown of their marriage for the first time, revealing she “went into contortions to try to fit the mold of the woman he wanted his wife to be.”

According to an excerpt attained by People, Moore writes about engaging in threesomes to please her then-husband.

“I put him first,” the G.I. Jane star explains. “So when he expressed his fantasy of bringing a third person into our bed, I didn’t say no. I wanted to show him how great and fun I could be.”

But Moore claims that engaging in the threesomes seemed to lead to Kutcher’s alleged infidelity, writing, “Because we had brought in a third party into our relationship, Ashton said, that blurred the lines and, to some extent, justified what he’s done.”

On GMA, Moore said she learned via a Google Alert of the cheating, and claims that when she asked Kutcher if the story was true, “He admitted it right away and I think my response was, ‘Are you f–king kidding me? [Laughs.] That was it. I felt like I could barely take a breath.”

During an appearance on The Ellen DeGeneres Show, Moore said she had spoken to her ex-husbands before the book came out, but told The Wall Street Journal they hadn’t actually read the final product yet.

“I’d definitely like to engage with them before it comes out,” she told the publication. “I have a sensitivity to anything that might make them uncomfortable. I had no interest in anybody being a bad guy.” 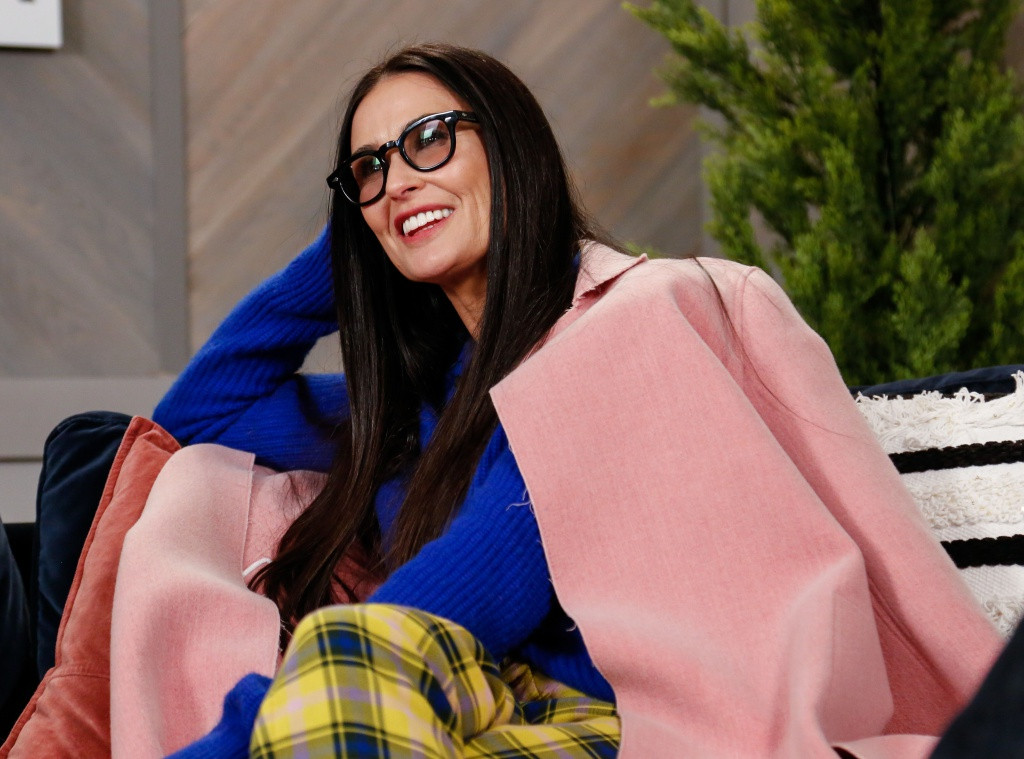 For Moore, it’s about telling her story in her own words, not getting back at ex-husbands or family members, telling Ellen DeGeneres, “I feel so good about the point of view, which for me, this is—I have no interest in blaming or villainizing anyone. The journey in the book is about overcoming.”

She continued, “In a sense, this is my story, my point of view. If anyone else in the book, including my daughters, if they see things differently, and in some cases they did—they had some things that they had sensitivity to because it being my story didn’t always allow for the context of say things that created the pain they had of when they weren’t speaking to me for me to share. It was truly honest about what my experience was.”

And ultimately, the dissolution of her marriage to Kutcher was about so much bigger than just him or their relationship, telling Sawyer, “I really know that there are parts of what occurred with this relationship ending that were a level of devastating for me that wasn’t really just about that relationship. It was really about my whole life.”

She further explained, “It was about being the 2-year-old who wasn’t safe—that this really represented that I’m not lovable, that I’m—I’m not deserving. And that’s not about him. That’s all just about me.”

Now, nine years after first starting her memoir, Moore is finally ready to share with the world everything she’s been through.

“I think my desire was to really get to a place where I am OK to really be seen,” she told People of writing Inside Out at the premiere of her new film, Corporate Animals. “When there isn’t anything to protect. That’s a great spot.”

And the biggest lesson she’s learned?

“Learning that I’m OK with just me was a great gift I was able to give myself,” she told Harper’s Bazaar.

Inside Out: A Memoir is available now.