If on Tuesday afternoon you were thinking that Jason Kenney might turn out to be a more relaxed member of the federation than he seemed while campaigning in Alberta’s recent election, you might have been taken aback by what he had to say Thursday morning.

“This bill, if passed in anything like its current form, will, in the submission of the Alberta government, be a disaster for the Canadian economy and seriously rupture national unity,” Kenney told a Senate committee. His concern was Bill C-69, the Trudeau government’s attempt to overhaul the environmental assessment process for major resource projects.

For at least as long as Justin Trudeau is prime minister, this might be the rhythm of relations between Alberta and Ottawa: eruptions of loud condemnation interspersed with quiet moments of grudging conciliation.

On Tuesday, Kenney graciously offered to pretend his party hadn’t promised to eliminate a cap on greenhouse gas emissions from the oilsands. That cap was a centrepiece of Rachel Notley’s climate change policies.

During the election campaign in Alberta, officials from Kenney’s United Conservative Party told reporters that a UCP government would not proceed with the NDP government’s cap. Those reporters subsequently reported that commitment.

Then, moments after being sworn in as Alberta’s 18th premier, Kenney decided that really wasn’t a campaign promise. “There is no commitment in our platform to do that,” he told reporters.

Technically, he’s not wrong: the promise was never written into the UCP platform. But it’s also hard to imagine Kenney would ever accept that sort of hair-splitting from a politician or government he opposed.

In this case, he’s unlikely to suffer for the flip-flop because both the NDP opposition in Alberta and the Liberal government in Ottawa are happier with the cap in place. For the Trudeau government, in fact, that cap is of profound importance.

When Trudeau went to places like British Columbia to make the case for building the Trans Mountain pipeline expansion, he cited that cap as one of the main reasons the expansion could be built responsibly. Had Kenney kept his commitment to lifting that cap, Trudeau would have had a much harder time approving the expansion this summer. A fresh confrontation between Ottawa and Alberta likely would have been the result.

But the oil industry in Alberta isn’t currently anywhere close to exceeding the cap. And while Kenney was still suggesting Tuesday he wasn’t fond of the cap, he also dismissed it as an “academic abstraction” and professed to have never been much interested in getting rid of it.

Both Trudeau and Kenney want and need that pipeline to go ahead. They’re both a little closer now to getting what they want.

‘A growing crisis of national unity’

And so, emissions cap in hand, Kenney came to Ottawa — and told senators reviewing C-69 that Justin Trudeau is pushing Canada to the verge of a new national unity crisis.

“Recent polling indicates that as many as 50 per cent of Albertans indicate that they support the concept of secession from the Canadian federation,” Kenney said. “I and our government are dedicated to national unity. I am here to convey to you and your fellow senators that there is a growing crisis of national unity in Alberta which would be exacerbated by the adoption of this bill.”

That Alberta has experienced significant hardship in recent years is beyond dispute. And there are few things more worrisome than talk of a national unity crisis. But Albertans’ anger is difficult to separate from the fact that so many of the province’s political leaders have been telling them to be angry.

Kenney argues that C-69 could precipitate a crisis because it’s a “flagrant” violation of Alberta’s constitutional right to develop its own resources. “In Alberta, this is known as the ‘no more pipelines’ act,” the premier said — acting as if he hadn’t been one of the loudest voices pushing that label.

The Senate might still make significant amendments to the bill. And if construction of the Trans Mountain expansion resumes this summer, it might be harder to portray C-69 as an existential threat to the province. For now, Kenney is still vowing to challenge the legislation in court. And he’s also still threatening to hold a referendum on equalization.

Still, he’s also just demonstrated that he’s willing to stand down when it’s in his interests to do so.

During his time in federal politics, Kenney showed himself capable of political nuance — or paradox. On the one hand, he was the smiling, glad-handing politician who worked countless rooms and events to persuade various cultural communities to support the Conservative Party.

On the other hand, he eliminated a federal program that funded health care for refugee claimants, attempted to ban new Canadians from wearing the niqab during citizenship oath ceremonies and added the phrase “barbaric cultural practices” to the citizenship guide.

It was that last item that precipitated one of the first clashes between Trudeau and Kenney. A few years later, Kenney was accusing Trudeau of wanting to put marijuana in corner stores and a brothel in every neighbourhood. Even after Trudeau’s Liberals trounced Kenney’s Conservatives, Kenney was willing to loudly question the prime minister’s intelligence. 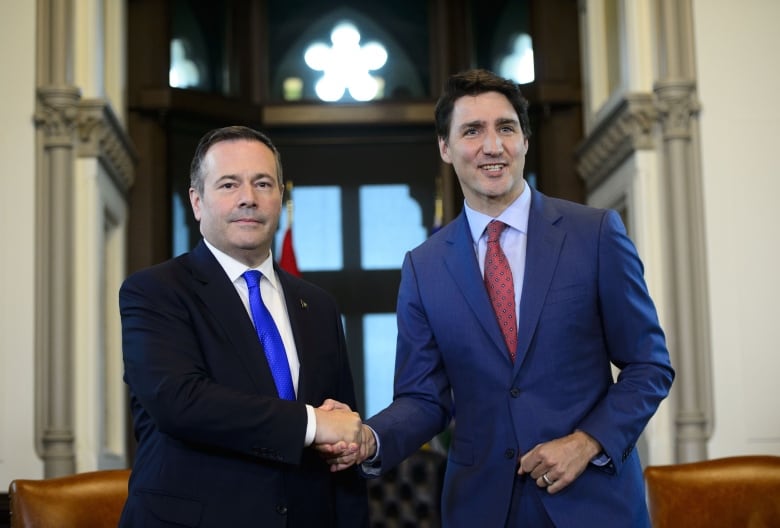 And yet, there he was on Thursday afternoon, sitting beside Trudeau and making happy talk while the cameras recorded a few token images to mark their first official meeting.

“Of course, you and I worked together before here in Parliament,” Kenney said. “It’s nice to see you in the newly established West Block building.”

For Trudeau, there’s a risk of real trouble in this talk about national unity. Many voters outside Alberta might want Trudeau to be the prime minister who counterbalances a figure like Kenney. Other voters might worry that Trudeau’s presence is the reason for the angst.

It’s easy to hear Kenney’s complaints and assume that he’d much rather be working with Prime Minister Andrew Scheer. But for as long as there is a Prime Minister Trudeau, Kenney has someone to blame, someone to fight. In politics, scapegoats can come in handy.

If both Trudeau and Kenney play their cards right, they might have each other to tangle with for many more years to come.