Thousands of opposition protesters gathered at different points in Caracas, heeding a call by opposition leader Juan Guaido for the “largest march” in Venezuela’s history a day after his calls for a military uprising fell short.

Some of Wednesday’s protesters in Altamira district said they were disappointed by the failure of the military to respond to the call to oust President Nicolas Maduro, as well as by the lack of a massive presence of demonstrators that could force a change of government.

Maduro has accused Guaido of trying to stage a coup and says there will be criminal prosecutions.

“Today we continue,” Guaido said in a post on Twitter early on Wednesday. “We will keep going with more strength than ever, Venezuela.”

He later appeared at one of the public protests. With his sleeves rolled up, the 35-year-old lawmaker said his movement is winning, despite the lack of military response on Tuesday. In his words, “the usurper has lost.”

He told the crowd that the opposition will need to step up its pressure against Maduro, and called on supporters to take steps toward a general strike.

“If the regime thought we had reached maximum pressure, they cannot even imagine,” Guaido told thousands of cheering supporters in eastern Caracas. “We have to remain in the streets.”

Supporters banged drums and chanted, “What do I want? Freedom!”

Guaido gestures as he speaks to supporters during a rally against Maduro’s government and to commemorate May Day in Caracas Wednesday. (Carlos Garcia Rawlins/Reuters)

Europe-based NetBlocks says the blocking began as Guaido appeared in public and called for a general strike.

NetBlocks said multiple services were barely reachable most of Tuesday after Guaido proclaimed he had military backing to unseat Maduro.

But Maduro was not ousted and those services were restored shortly before he addressed the nation on TV Tuesday evening.

Whether the protest turnout meets those lofty hopes will provide a key test for Guaido, amid frustration among some supporters that Maduro remained in office more than three months after Guaido — who leads the opposition-controlled National Assembly — invoked the constitution to assume an interim presidency, arguing Maduro’s May 2018 re-election was illegitimate.

The situation remained unsettled and unclear again by Wednesday evening. Many of the protesters in Caracas were heading home.

Harold Trinkunas, a political scientist at Stanford University who is an expert on the Venezuelan military, said the opposition faces a daunting task in converting members of a military whose senior officers are loyal to Maduro or who may fear the legal or other consequences of a change in government.

“It’s too soon to say, but certainly the initial move by the opposition did not seem to materialize the strong military support they would have needed,” Trinkunas said.

‘It wasn’t a success’

David Smilde, a Tulane University professor and expert on Venezuela, said it’s possible that Guaido made his announcement earlier than expected, perhaps spooked by rumours of his imminent arrest.

“The entire episode should lead to a round of reflection within the opposition and their supporters in the U.S. government regarding how to address this crisis,” Smilde said. “It is clear the pressure-collapse scenario they have been working with has run its course.”

“I don’t want to say it was a disaster, but it’s wasn’t a success,” Marilina Carillo, 54, said of Tuesday’s protest, standing in a crowd of people blowing horns and whistles Wednesday morning.

Once again on Wednesday, security forces launched tear gas at a small group of protesters in the western Caracas neighbourhood of El Paraiso. National guardsmen dismounted from motorcycles to disperse the crowd, firing rubber bullets. Demonstrators, some covering their faces against the tear gas fumes, grabbed the gas canisters and tossed them back.

“Assassins!” one woman cried out.

Lavrov also condemned what he called the United States’ “interference” in Venezuela’s internal affairs as a breach of international law, adding that dialogue between all political forces is required in the Latin American country. 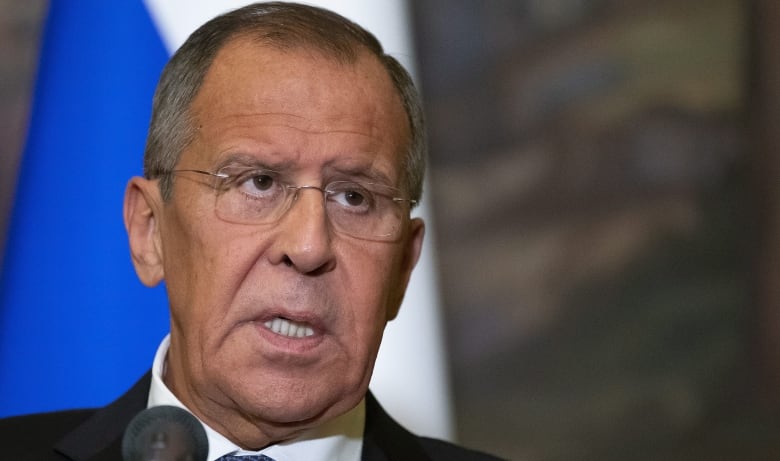 Russian Foreign Minister Sergei Lavrov has warned the U.S. that any aggression in Venezuela will result in the ‘gravest’ circumstance. (Alexander Zemlianichenko/Associated Press)

Earlier, Pompeo said during a television interview Wednesday that the United States was prepared to take military action to stem the ongoing turmoil in Venezuela.

While Guaido has earned the backing of the U.S.and most Western countries, including Canada, the armed forces have stood by Maduro, who retains the support of allies like Russia, China and Cuba.

That has frustrated Guaido’s bid to assume the day-to-day functions of government on an interim basis, which he says would be a prelude to calling new elections.

Maduro, a socialist, calls Guaido a puppet of the U.S. who is seeking to orchestrate a coup against him.

Russia’s Ministry of Foreign Affairs rejected a suggestion by Pompeo on Tuesday that Russia had persuaded Maduro not to flee in the face of street protests, calling the assertion part of an information war.

Pompeo said in a television interview that Maduro was prepared to leave the country on Tuesday morning in the face of a call for an uprising by Guaido, but reversed his plan after Russia intervened.

When asked to comment on Pompeo’s comments, Maria Zakharova, a spokesperson for the Russian Foreign Ministry, told Reuters they were part of an “information war.” Moscow has previously accused the United States of trying to foment a coup in Venezuela, a close Russian ally, and of trying to demoralize the army by spreading potentially morale-sapping fake news.

Venezuelan living standards have declined even further in the first several months of the year, with blackouts and water shortages adding to hyperinflation, and chronic shortages of food and medicine that have prompted millions to emigrate.

“I hope this will be the last time we have to take to the streets,” said Claudia Riveros, a 36-year-old bakery worker carrying a Venezuelan flag during Tuesday’s protest. “I want to see the end of this usurping government.” 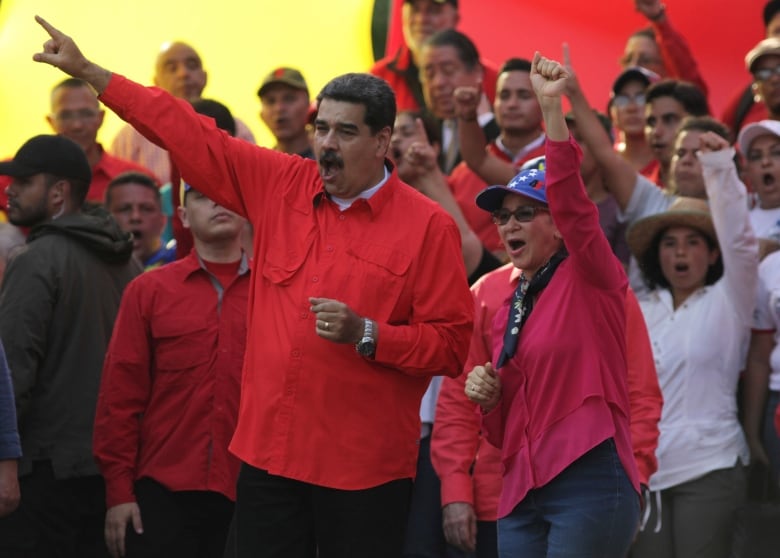 Maduro and his wife Cilia Flores, centre right, wave at supporters during a rally in Caracas Wednesday. (Boris Vergara/Associated Press)

Maduro also urged supporters to march on Wednesday. He appeared at a socialist party rally Wednesday afternoon, saying U.S. leaders had been fooled by the opposition into believing he was about to flee Venezuela. He said the Trump administration was part of a “pot of lies” and likened the ordeal to “fake news.”

He promised to put all conspirators behind bars.

“Sooner or later they’ll go to jail and pay for their betrayal and their crimes,” he said.

Spain’s government said Lopez, Guaido’s political mentor and the country’s most prominent opposition activist, is at the Spanish ambassador’s residence in Caracas along with his wife and daughter. 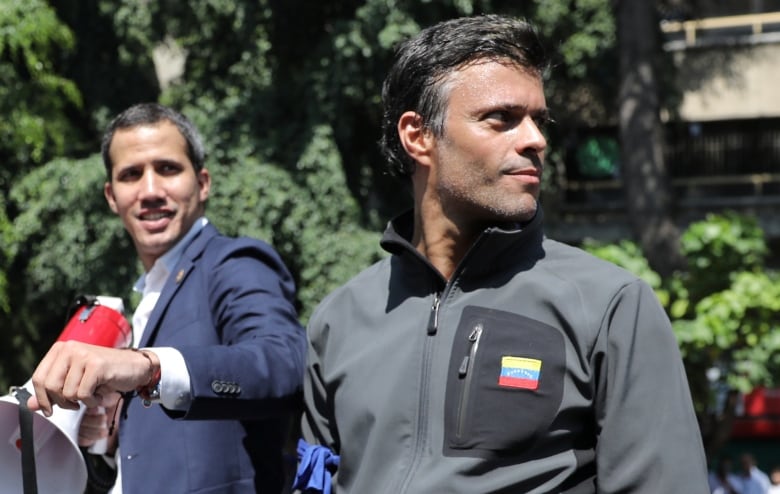 The Chilean Foreign Minister Roberto Ampuero had already said on Twitter that Lopez and his wife had made the “personal decision” to go to the Spanish Embassy because the Chilean Embassy “already had guests.”

Detained in 2014 for leading a previous round of anti-government unrest, Lopez said on Tuesday he had been released from house arrest by security forces following an order from Guaido.