A province-wide service launched Monday is ready to provide support and guidance to anyone affected by sexual assault.

One Line will assist survivors over the phone, through text messaging and online chat, making it the first of its kind in Canada, says Deb Tomlinson, CEO of Association of Alberta Sexual Assault Services.

“It takes a special skill to use text and chat in a supportive way,” Tomlinson said. “So, we did a lot of research and trained our staff to use that in the most effective way possible.”

An ad campaign will encourage Albertans to share photos of themselves with their #ArmsOpen in an effort to spread the word on social media about the new service.

One Line will be answered by responders based in Edmonton, Calgary and Red Deer. Each office will have about 40 staff members working on the phone line every week.

Those staff members will also have access to an interpreter service that offers more than 200 languages, including Cree.

Inspiration for the service came from a phone line launched three years ago by the Central Alberta Sexual Assault Centre in Red Deer.

Crisis lines are not new to sexual assault centres but Tomlinson expects other provinces will be interested to learn more about the Alberta-led innovation.

“We started with just volunteers on their land lines out of their homes,” Tomlinson said. “So this is a big move forward. It’s professionalized, it’s specialized and it’s using technology.” 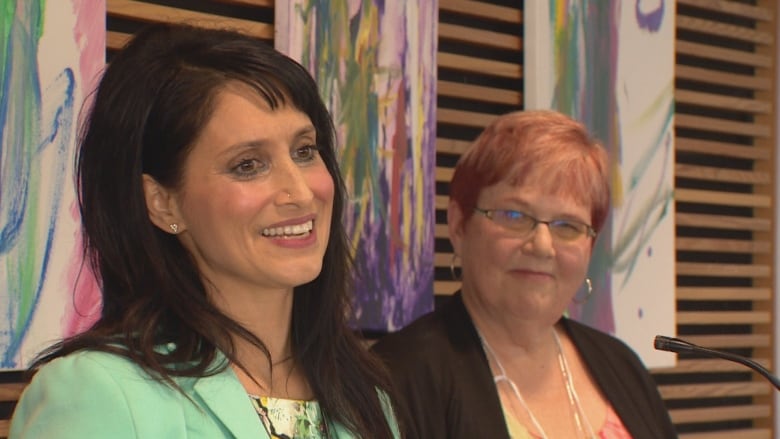 UCP MLA Leela Aheer, minister of Culture Multiculturalism and Status of Women, was on hand to mark the launch of One Line. (Trevor Wilson/CBC)

Tomlinson also expects the service will be particularly effective in rural communities where, she said, there tends to be higher rates sexual violence.

Funded in part by the province, MLA Leela Aheer, minister of Culture Multiculturalism and Status of Women says future funding will be determined by consultations.

“At this point in time, there’s a lot of work to still be done,” Aheer said. “It is a huge part of our platform.”

The UCP platform committed to spending $5 million to “combat sexual assault and provide services to survivors of sexual violence.”

A total of 11 communities marked the launch of One Line Monday including Bonnyville, Fort McMurray, Grande Prairie and Medicine Hat.