Residents in Edmonton’s Riverdale neighbourhood are calling on the city to get a handle on homeless camps after a series of fires over the past few days.

Since Saturday, Edmonton Fire Rescue Services has responded to eight reports of smoke and fire around Dawson Park in the river valley, east of downtown.

Residents say the fires start at homeless camps in the area, which are uncomfortably close to their houses.

Treena Michayluk has been living in Riverdale for 10 years, and said a large fire in the park on Monday night didn’t come as a surprise. She and her neighbours became aware of the blaze after hearing a loud bang, which Michayluk believes was the sound of a propane tank exploding.

The flames scorched a section of trees near Rowland Road, where an acrid smell lingered Tuesday afternoon. Needles, garbage and abandoned shopping carts were scattered across the area. The scene is part of Edmonton’s river valley, a place often considered to be the crown jewel of Edmonton.

The cause of the fire was undetermined, said Edmonton Fire Rescue spokesperson Suzzette Mellado.

Litter was scattered across the area where a fire broke out on Monday night. (Sam Martin/CBC) 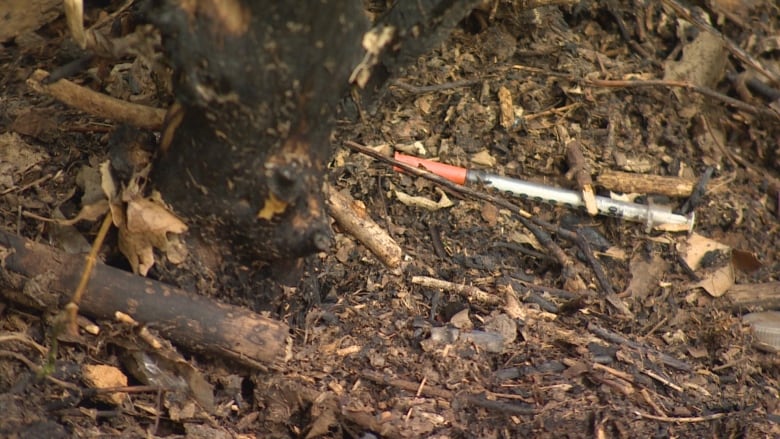 Needles can be found around homeless camps in Dawson Park. (Sam Martin/CBC)

People experiencing homelessness need to be treated with compassion, Michayluk said, but the camps and fires are making residents feel unsafe.

“There lacks an immediate response to the crisis that we’re living right up against,” she told CBC News.

Despite multiple calls to 311 and 911, Michayluk said Dawson Park remains a “lawless zone.”

“The city has failed us in their response to this crisis,” she said. “There needs to be more done and it needs to be done not 10 days from now, not two years from now, but tonight. Park rangers coming up, flushing the area, making this a safe and secure spot in my backyard.”

Last Wednesday, councillors on the city’s community and public services committee directed administration to come up with a plan to fast-track 600 units of permanent supportive housing for people in need.

Michayluk fears that solution will be too late.

“I love the fact that there’s process being put in place for future and I love that there’s solutions coming down the road,” she said. “That’s just not helping us right now.” 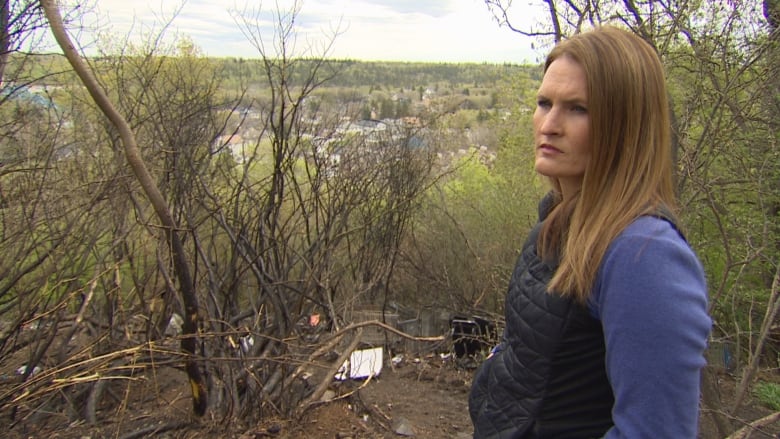 Treena Michayluk is worried about safety in her neighbourhood, but says the issue of homelessness needs to be handled with empathy. (Sam Martin/CBC)

Coun. Scott McKeen said permanent supportive housing is crucial, but a solid interim option to reduce the number of people sleeping rough would be to have shelters operating 24/7.

“We have not offered to them housing options that work for them, so they make up their own,” he said.

“But in making up their own, there are … impacts on the environment, on neighbourhoods and this threat with fires. It’s a very serious situation.”

“We cannot have a fire break out in the river valley and … start to spread to our urban forest and into neighbourhoods,” he said.

Michayluk said she’d like to see the creation of an emergency response team specifically for Dawson Park.

Riverdale resident Arthur Asquin said the fire situation is getting out of hand, and he hopes it’s resolved soon.

“You want to just be comfortable where you live,” he said. “I know life has its interesting moments, but you know we all … seek a nice comfortable living, you know free from just fire disasters or crime.”