The last thing Sheila Flaherty had to do to get ready for A Taste of the Arctic, before flying south to Ottawa, was to smoke 4½ kilograms of Arctic char.

“Just look at the colour of this meat, it’s so beautiful,” she said, stroking a bright red fillet before transferring it to the four-rack smoker on the porch of her home in Iqaluit.

Flaherty smoked the fish with maple to give it a light flavour, and as she opened the door of the smoker, the earthy smell of maple smoke filled her house.

Inuit Tapiriit Kanatami (ITK) has been putting on A Taste of the Arctic every year since 2010 at the National Arts Centre in Ottawa. This year’s event takes place Wednesday.

ITK describes it as a night of “Arctic food, Inuit culture and northern networking.”

Flaherty calls it “the Inuit culinary event of all time, every year.”

Flaherty is the first Inuk chef to ever help write and develop the menu for A Taste of the Arctic. She is working with the National Art Centre’s executive chef, Kenton Leier.

Flaherty said she’s proud and humbled by the honour.

“Our food is in our veins,” she said. “Inuit always come together over food.”

Kenton Leier, left, chef at the National Arts Centre in Ottawa, and Flaherty co-wrote and developed the menu for this year’s A Taste of the Arctic. (Submitted by Sheila Flaherty)

This will also be the second year the National Arts Centre has allowed ITK to source food directly from hunters. That’s making a big difference to the menu.

“This year we will have the most variety to Inuksiut, or Inuit food, on the menu,” said Kevin Kablutsiak, who’s with ITK.

Planes carrying caribou, muskox, narwhal, scallops, crab and whitefish have been descending upon Ottawa. The char Flaherty is smoking came from Pangnirtung, Nunavut, a community on east Baffin Island.

Other food is coming from across the Arctic, from the Inuvialuit region in the west — where Flaherty’s family is from — to communities across Nunavut, Nunavik in northern Quebec, and Labrador. 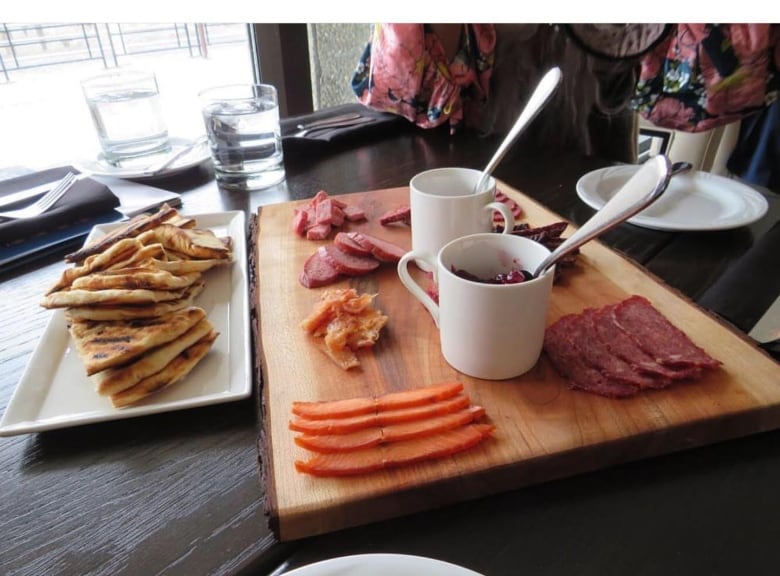 A charcuterie board with muskox pepperoni, caribou sausage, bipsi (dried white fish), nikku (dried caribou meat), hot smoked maple Arctic char and Arctic jam. This will be served at A Taste of the Arctic. (Submitted by Sheila Flaherty)

Flaherty is now orchestrating a team of chefs to bring her creations to life.

The main dish will be seal meat sliders. Flaherty made sure she got enough seal for 70 pounds of meat to make the 600 servings required.

“It’s a painstaking effort,” Flaherty said. “Especially if the seal is smaller, the only meat on a young is … around the ribs.”

The Inuvialuit Regional Corporation donated muskoxen and caribou pepperoni, which will be served on a charcuterie board along with the smoked char.

Flaherty grew up in southern Canada but moved to Iqaluit in 2010 after she got married. She and her husband hunt together, and she started developing ways to prepare Inuksiut.

Her Arctic char ceviche served on a soapstone platter, which will be featured at A Taste of the Arctic, got her onto MasterChef Canada. She was a finalist in the fourth season and the first Indigenous chef on that program. 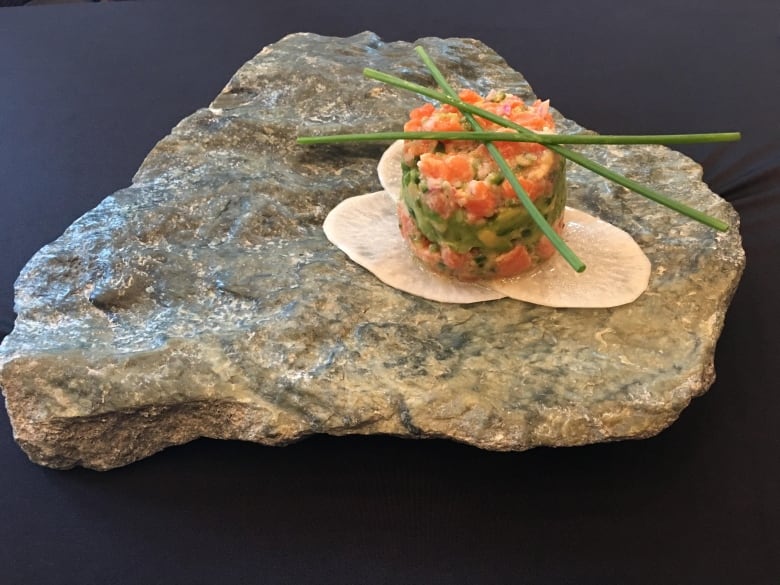 This is the Arctic char ceviche, served on soapstone, that got Sheila Flaherty a spot on MasterChef Canada season four. It will be served at this year’s A Taste of the Arctic, too. (Submitted by Sheila Flaherty)

ITK sought out Flaherty to help with A Taste of the Arctic.

Maybe it’s because of the chef, or the country food, but this year’s tickets for A Taste of the Arctic sold out fast.