Stephanie Williams sped along the gravel road, flooring the gas pedal of her truck. If she could only make it over the dike, she figured she would be in relative safety.

With her two daughters, then aged nine and 11, screaming in the backseat, it was like a scene out of the movie Jurassic Park. But for Williams and her girls, instead of a giant dinosaur running them down, it was the rushing waters of a flash flood.

It was the spring breakup of 2006, giant pieces of ice jammed up the Albany River were causing waters to rapidly rise. Kashechewan is a Cree community on the James Bay coast. That spring, flooding forced hundreds of people to leave the northern Ontario reserve.

In the spring of 2006, pictured here, Kashechewan residents were caught when giant pieces of ice jammed up the Albany River causing waters to rapidly rise. (Submitted by Dorothy Williams)

Williams and her young girls were at the airstrip helping to evacuate elders from the community when they saw water rushing in from the tree line.

In a panic, the plane’s pilots pushed people, even those who were not supposed to leave that day, onto the plane and took off to escape the flood.

I didn’t know if I would get swept by the sheer force of the water.– Stephanie Williams, Kashechewan resident

The airstrip was completely under water within minutes.

“I didn’t know if I would get swept by the sheer force of the water,” Williams said of her terrifying two-kilometre race back to town.

“My goal was to find my son. I just wanted my kids around me,” she said.

In 1957, the federal government moved Kashechewan to a floodplain. The community has experienced major flooding in 1976, 1985 and in 2006. For 17 years, the community has been evacuated every spring, with residents going south to towns such as Timmins, Kapuskasing and Cochrane.

Williams told her story in 2006 and says she can’t believe that, 13 years later, she is still talking to reporters about the evacuation.

I just want it to stop.– Arthur Koosees, 13-year-old resident

This year, Wesley said the Kashechewan band council asked him to organize a rally on Parliament Hill to bring awareness to their situation. Two hundred community members travelled to Ottawa to pressure the government to make good on its promise to relocate the town to higher ground.

This Thursday in Toronto, federal Minister of Indigenous Services Seamus O’Regan and officials from the Ontario Ministry of Indigenous Affairs are expected to sign a relocation implementation plan. 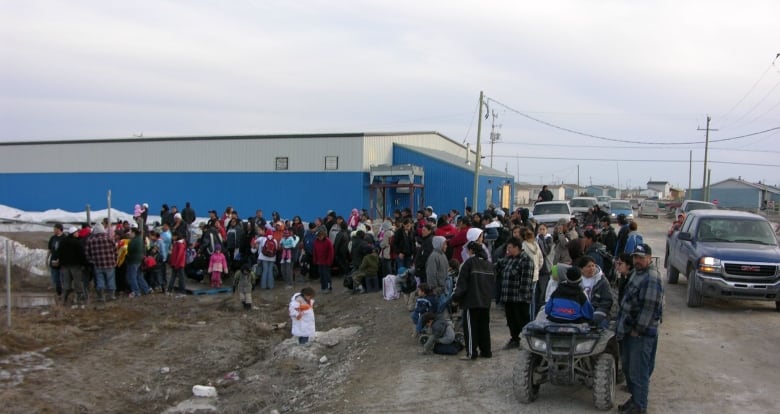 In 2006, it took three days to emergency airlift everyone out by helicopter after major flooding. Resident Stepanie Williams says many residents suffer PTSD from the experience. (submitted by Dorothy Williams)

Wesley, who splits his time between Ottawa and Kashechewan, says he usually escorts his grandparents during evacuations and it was particularly difficult for them this year.

“It’s really hard on them. They’re told to leave their community and live in hotels,” Wesley said. “They’re stuck in small rooms and they are so far away from home.”

Last Tuesday, Williams, Wesley and his grandfather Simeon made the 10-hour one-way trip from Timmins, Ont., to take part in the rally on Parliament Hill, along with 200 of their neighbours from Kashechewan.

“Our people have been relocated again, and they’re all over the place in urban communities, and we’re getting tired of that,” Kashechewan Chief Leo Friday said at the Parliament Hill rally last week.

Arthur Koosees, 13, spoke at the rally last Tuesday on Parliament Hill. He says flooding and evacuations are ‘all I’ve known and I just want it to stop.’ (Jamie Pashagumskum/CBC)

Also present was 13-year-old Arthur Koosees. He says it was hard growing up with the evacuations and he’s sick of it.

The engineering firm hired by Kashechewan in 2015 to assess the community’s 24-year-old dike, said it was deteriorating and presented “an intolerable risk to the community.”

“In the spring of 2006, the ring dike was almost over toppled, which would have released a wall of water engulfing the entire community in a manner of minutes,” according to a report produced by the company, Hatch Ltd. 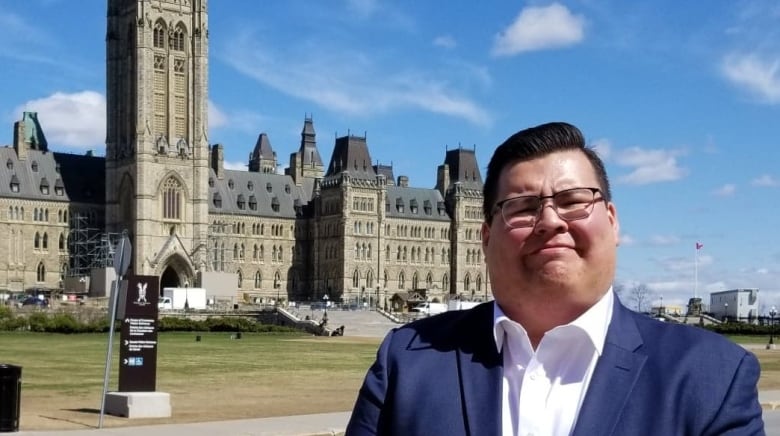 This year, Tyson Wesley, Kashechewan’s director of economic development, was asked to organize a rally on Parliament Hill to bring awareness to their situation. (Jamie Pashagumskum/CBC)

Stephanie Williams says a lot of people in Kashechewan don’t trust the dike, and feel like it is a tragedy waiting to happen. She also said living “cooped up” behind it is “like living in a bowl.”

Since the events of 2006, Williams said many of Kashechewan’s residents have developed symptoms of PTSD, adding that they felt like prisoners as it took three days to airlift everyone out by helicopter.

Williams’ daughter, Aimee, who was nine during the 2006 flood, said in an open letter to Anishinabek News that many people were terrified of being overcome with the water of a failing dam.

She remembers the anxiety flowing through the town and lying awake unable to sleep.

“People were scared because they could see the ice over the dike. I … was worried because I didn’t know how to swim.”