It’s been a rough few days for James Charles.

One of the biggest names in the YouTube beauty industryâ€”which, yes, is a big deal; ask any Gen Z-er in your lifeâ€”the 19-year-old vlogger’s subscriber count once topped out at over 16 million. But ever since his former friend and mentor (not to mention fellow YouTuber) Tati Westbrook called him out in a scathing 43-minute video entitled “BYE SISTER,” accusing him of being unsupportive of her and her business endeavors and spreading lies about her, as well as having a habit of sexually harassing straight menâ€”it’s a real mess, y’allâ€”he’s had to watch as his follower count has, if not gone into total free fall, then taken a serious tumble.

Meanwhile, those watching from the sidelines are left to wonder if the once-rising star’s young career is strong enough to ride out this storm or if it, the latest in a surprisingly long list for such a brief career, might derail him for good.

“I get really negative comments all the time, but the comments that really bother me are the ones that question my character,” James told Allure in January 2017. “I try so hard to stay a positive role model. It’s sad to say, but you get used to it after a while, and I have a very thick skin, so I can take it.”

At that point in his career, James was only 17 years old. He’d yet to graduate from high school. His YouTube channel was barely a year old. And he’d yet to even face down his first scandal.

No, that first year for James contained such good news and such a rapid ascension that it would’ve made anyone’s head spin. After launching his channel on December 1, 2015, the aspiring and entirely self-taught make-up artistâ€””YouTube videos and practice have taught me all I know,” he told Cosmopolitan in October 2016. “I’ve been watching tutorials for years now, so when I started makeup I did have a semi-idea of how to do things.”â€”saw a tweet with his high school graduation photos go viral in September (thanks, in part, to a retweet from Zendaya), landed a truly historical gig as the first male brand ambassador for CoverGirl in October (propelling his 427,000 followers truly skyward), and appeared on The Ellen DeGeneres Show in November.

To say his life changed practically overnight would be an understatement.

“When the announcement was made I woke up the next morning with over 700 text messages,” he told Seventeen of the CoverGirl gig that November. “Literally everybody that I had ever spoken or even looked at texted me with just like the most nice, kind, supportive messages. I was so overwhelmed with positivity.”

Soon, he was juggling finishing out his senior year with photo shoots alongside the likes of Katy Perry. “The deans and teachers at my school have also been extremely supportive and obviously now I am missing a lot of school for different business stuff,” he told the outlet. “It’s not the easiest thing in the world. A few nights ago, I had a shoot all day long, then I went home and wrote a paper for my government class until three in the morning, then woke up and did a shoot the next morning.”

As a part of the So Lashy Mascara campaign for “Lash Equality,” James was not only the first male to represent the make-up company, he also became the first person to handle their full face for his appearances. “I’m the first person ever to do their own makeup for all the shoots, which is really cool,” he told Seventeen. “I know some people have done [some makeup] elements in the past, but I’m the first person to go from nothing to full-on glam for the shoots.”

For James, the hope was that his presence in the campaign would inspire other kids to express themselves more freely and comfortably. “Hopefully other people will see this, and when they think, ‘Oh, this random 17-year-old kid just started doing makeup recently and is now the face of CoverGirl,’ I hope that inspires them to really be themselves and feel comfortable and wear makeup and express themselves in a manner they havenâ€™t been comfortable doing before,” he told The New York Times in October 2016.

But shortly after speaking with Allure about his banner 2016, the first sign that the wheels might fall off this entire endeavor was made clear in the form of an ill-advised tweet about, of all things, the Ebola virus.

On February 16, 2017, James tweeted, “‘I can’t believe we’re going to Africa today omg what if we get Ebola?’ ‘James we’re fine we could’ve gotten it at chipotle last year’…”

After being swiftly called out by fans and critics alike for the comment, he deleted the offending tweet and issued a short apology on the platform. “I am extremely sorry,” he wrote. “Regardless of my intentions, words have consequences. I take full responsibility and will learn and do better.”

In an interview with Affinity the following day, he attempted to explain himself a bit better. “My friend confused E. Coli and Ebola for each other. I thought the mistake was funny, so I tweeted the conversation, but I posted it without realizing what the tweet as a whole was implying,” he said, explaining that he tweeted as he was about to take off for South Africa, a country that he knew had no cases of the disease.

“I’m a 17 year old kid. I like to think of myself as mature, but I’ve definitely said many things in the past that I regret and that are problematic. My age is not an excuse to be a brat, but that being said, I’ve had much less life experience and time to educate myself on these type of issues,” he continued. “Many people have not taken my apology well, and I understand why it may seem false, especially because my dumbass called Africa a country rather than a continent. I meant it when I apologized. The only thing I can do right now is learn from my mistake.”

Weeks later, however, his authenticity would be called into question as well. At the end of February, Thomas Halbert, a former friend of James’ tweeted out screenshots of text messages allegedly sent by James that seemed to confirm that the senior photos that helped make him a star had been something of a fabrication.

When James tweeted out the photos in September, he claimed that he’d retaken the portraits after bringing his own ring light to the studio with him to ensure that his “highlight would be poppin.” 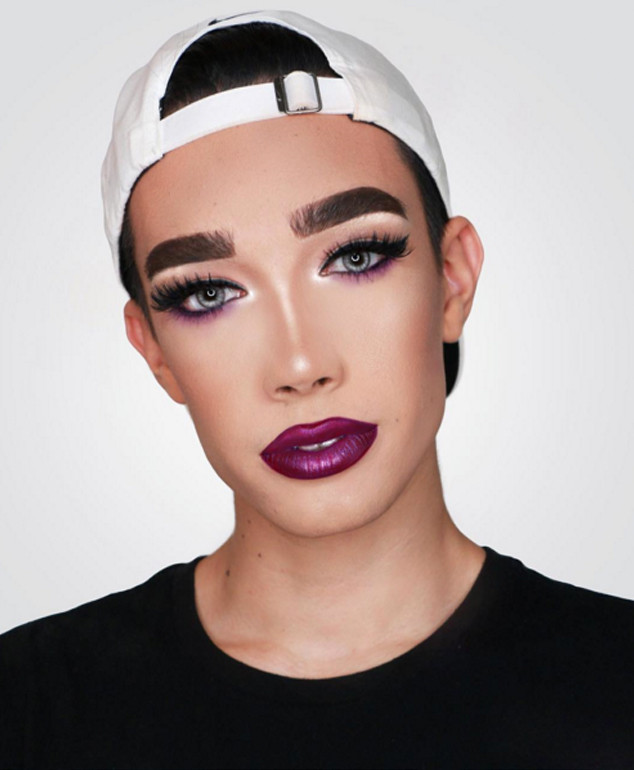 While speaking with Ellen DeGeneres in November, he told the talk show host that the tweet going viral helped him get CoverGirl’s attention, ultimately leading to his historical gig. So, in a way, these photos were the linchpin to his growing fame. And that made Thomas’ tweets all the more upsetting.

“do you want met to post the convo about u editing ur yearbook pic & how the ringlight tweet is fake? since u wanna switch it up?” Thomas tweeted at James in a series of since-deleted tweets on February 28, 2017. “recall when u emailed the yrbook company askin if u could edit ur photos? ur come up is a scam sis! i rebuke ur tom foolery!”

Thomas followed that up with the screenshot of a text conversation in which Thomas writes, “The fact you scammed social media into thinking you retook your senior photos” and James allegedly replies, “If you expose me I’ll kill you. But I know. Call me Joanne.”

James later tweeted, “Trust no one.”

What the successive scandals didn’t do, however, was derail the legally blindâ€””It really doesn’t affect the process that much,” he told Seventeen. “My contacts are the same prescription as my regular glasses”â€”budding icon’s nascent career. Though his contract with CoverGirl ended a year after it began, 2018 saw James win a Streamy Award for the Beauty category, take home the title of Beauty Influence of 2018 at E!’s People’s Choice Awards, film a Halloween tutorial with none other than Kylie Jenner, launch a merch line of hoodies, sweat pants, T-shirts and accessories called Sisters Apparel, and launch his own eye shadow palette and makeup brush collection via a collaboration with Morphe Cosmetics. The eye shadow palette sold out multiple times, once in less than 10 minutes. All told, his net worth has been estimated at around $12 million. 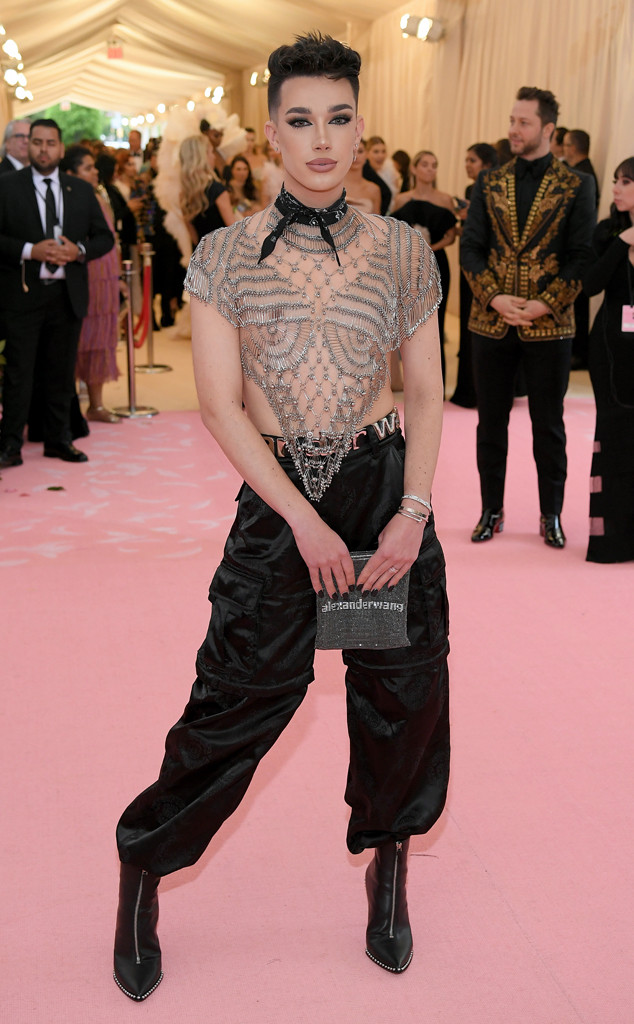 Heading into 2019, things only began to get bigger for James. In April, he announced his first-ever tour, where fans could spend anywhere from $52.50 to $500 to see him do his thing live and in person. We’re gonna have, of course, makeup live on stage with maybe a few sisters from the audience, we’ll be playing games, you guys will be coming up, we’ll be doing Q&As, of course there’ll be music as well, and duh â€“ a whole lot of Instagram selfies,” he said of the Sisters Tour in a YouTube video. The tour is still expected to kick off on June 26.

And just this month, he was invited to walk the red carpet at the ultra-exclusive Met Gala, dressed by Alexander Wang as a guest of YouTube. “being invited to such an important event like the ball is such an honor and a step forward in the right direction for influencer representation in the media and I am so excited to be a catalyst,” he wrote on Instagram.

Unfortunately, as he began to reach these massive heights, scandal soon followed. There was the April video in which he insinuated trans men aren’t real men by claiming that he wasn’t “full gay” because “there’s also been like trans guys in the past that I was like really, really into for a moment.” (He later issued multiple apologies, saying in one, “That stereotype and implication is really, really dangerous and I am very, very sorry. If you are a trans man, you are man, if you’re a trans girl, you are a woman…You are valid in your identity.”) Then there were those who took issue with his comments on his Met Gala appearance, namely that he would deign to conflate “influencer representation in the media” with minority groups who genuinely struggle for representation.

And then, of course, there’s the whole Tati Westbrook mess. Following the myriad claims from his former mentor, claims that started when James endorsed a supplement line in direct competition with her own and came to cover all manner of shady behavior, James has finally taken the hit that no other controversies have been able to land thus far. He’s apparently lost celebrity followers like Jenner, Perry, Miley Cyrus, Demi Lovato and Shawn Mendes. As of press time, he’s lost around three million subscribers on YouTube, the first million in just 24 hoursâ€”apparently a record.

Before going into apparent hiding, James did post an 8-minute video of his own, sans his usual made-up face, in which he acknowledged how he’d disappointed just about everyone.

“What sucks the most is that I know there’s nothing I can say or do to ever earn that friendship or trust back but I don’t blame them for it,” he said. “A lot of the time when I’ve had to address things in the past, I’ve acted out of impulse and I’ve gone off and tried to pull receipts or facts or screenshots and play the victim and I’m not doing that today, I’m not. That is all I have to say, I’m sorry.”

What remains to be seen is whether or not that’ll be enough.

The Brilliance is in the Details of HBOâ€™s Riveting Mare…