Field Reports is a series of stories told by people in the Kamloops community, who pitched their ideas and produced the radio segments with the help of CBC Radio One.

Gabe Jules has always loved being on the land.

As a member of the Skeetchestn Indian Band, he grew up heading out into the bush with his family. He learned about how to fish, which plants are good to eat and which ones can be used as traditional medicines.

Now he gets to share that knowledge through an innovative new program that gets First Nations people out in the land in a capacity similar to a conservation officer.

Patrollers are involved in both education and enforcement of what people should be doing on the land. But, more critically, they help inform future land management practices in the province by tracking information about animals and plants in areas affected by devastating wildfires.

“It is really important that our knowledge comes first,” Jules told Joanne Hammond, a community field reporter for CBC.

The Secwepemc Territorial Patrol was formed after the 2017 fire season. The First Nations-led partnership connects the provincial government with affected Indigenous communities in a program that allows band members to reconnect with their lands and become stewards of the territory.

Because of his background on the land, Jules said the knowledge he and his fellow patrollers received from their ancestors affects how they approach managing the ecosystem.

“It doesn’t just affect the forest and the trees, it affects the salmon, it affects all the life,” he said.

“First Nations really rely on a lot of the resources that are out there, so we get involved and [if] we have an actual role, I think we’d be a lot more comfortable with the way things are operated.”

One of the goals of the Secwepemc Territorial Patrol is to give local First Nations the opportunity to be the stewards of their land. (Submitted)

Eight bands in the region secured short-term funding for a patrol program from the provincial government in 2017. Their first year in action was 2018, which was the second consecutive record-breaking wildfire year in B.C.

“We knew our lands were really damaged beforehand,” said former Bonaparte Indian Band chief Ryan Day, one of the leaders that initiated the patrol.

One of the ways the patrols are helping restore the land is by implementing regulations on how mushrooms are now picked.

Last year, the Ministry of Forests, Lands, Natural Resource Operations and Rural Development supported the patrols by announcing they were partnering with local First Nations to help restore burnt areas and preserve areas from any harm that may be caused by irresponsible mushroom picking practices.

The province made it mandatory for individual pickers to pay a $20 fee and buyers a $500 fee.

In return, the patrol provided information for morel mushroom pickers, who came to the area in hordes as the mushrooms popped up following the fires. It brought in porta-potties and garbage cans for visitors to use and keep the land clean, and set up specific camping areas to reduce human impact on the land.

The Tsilhqot’in Nation called the new regulations a success, saying that in previous years there had been a big mess left behind by mushroom pickers.

“We’ve heard stories over the decades of morel harvesters being really irresponsible on the land base and thousands of them flooding to small areas, and so we knew that it could be extremely damaging to the land base and so it was critical that we get on top of it,’ said Day. 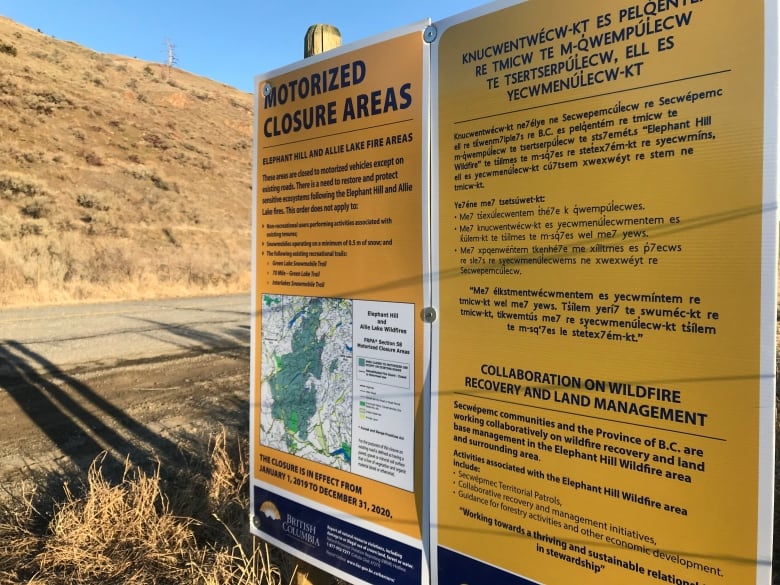 The B.C. government has given the Secwepemc Territorial Patrol funding to rebuild land management on Secwepemc territory. (Submitted)

‘Get people back on the land’

Carrie Dan, who also works with the patrol, said she’s seen a lot of politics and disagreements between First Nations throughout the years, but this particular group has worked together amicably.

“We’re working together for the same, better cause and where we have shared territories,” she said.

“I actually see us as role models in a pilot program. We need to share this information with all of our First Nations neighbours and nations throughout the province and get everybody involved to have a better connection to the land base and get people back on the land.”

After the 2017 Wildfires, Secwepemc Territorial patrols started to look after the land. Our last Field Reporter brings us an update. 8:31