Environment advocates say Canadian senators are bowing to pressure from the energy industry to gut new environmental-assessment legislation and they fear the Liberal government is going to do the same.

Bill C-69 is meant to be an effort to improve the way major energy and transportation projects are evaluated for their environmental impact, making the assessments more stringent so they’re less likely to be challenged in court.

The Liberals, who introduced it, say lax assessments are why so few big projects, and no new oil pipelines, have been approved in Canada in years — they’ve been tied up in challenges.

The Conservatives, backed by provincial politicians such as Alberta’s Premier Jason Kenney, say the process laid out in Bill C-69 would keep important projects from getting past the assessment stage.

More than 130 amendments are on the table at a Senate committee that could dramatically alter much of the bill, including moves to reduce cabinet discretion to intervene in the assessment process, to make it harder for anyone to challenge a project approval — or denial — in court, and to change how climate-change impacts are considered.

Prime Minister Justin Trudeau shakes hands with Alberta Premier Jason Kenney in his office on Parliament Hill in Ottawa. Kenney was in the capital to present to the Senate about Bill C-69. (Sean Kilpatrick/The Canadian Press)

Many of the amendments are word-for-word what was asked for by energy lobby groups, including the Canadian Association of Petroleum Producers.

Kenney warned the Senate committee on May 2 that if the amendments suggested by Alberta’s former NDP government, as well as those coming from the energy industry, were not adopted as a whole, it would stoke fires of Alberta separation result in a constitutional challenge on the grounds that the law intrudes on provincial rights.

“Now it’s going to swing way over to the industry side,” he said.

“The oil and gas industry is running amok in a Senate process and that is scary because they are only one stakeholder.” 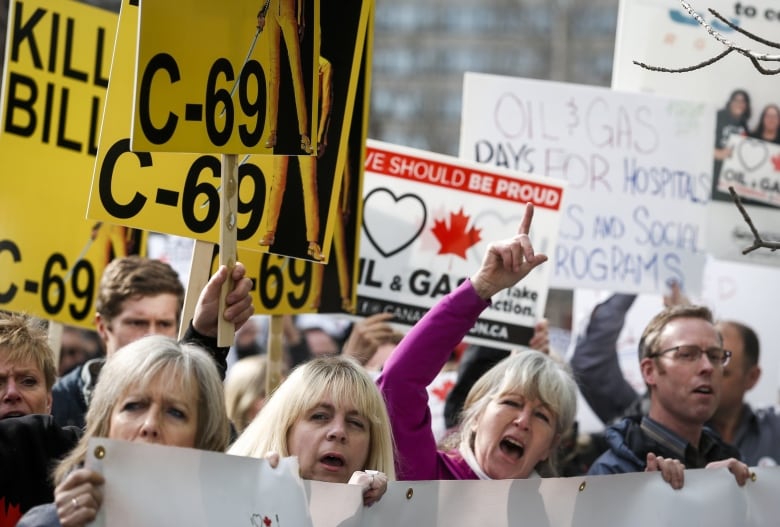 Pro-pipeline supporters rally outside a public hearing of the Senate committee on energy, the environment and natural resources regarding Bill C-69 in Calgary last month. (Jeff McIntosh/The Canadian Press)

Oil-industry advocates launched a full-court press on the Senate, sending more than 50,000 letters and emails to individual senators, as well as publishing senators’ phone numbers and flooding them with calls.

Environment advocates also made a strong push to support the bill, but Ginsberg said very few of the proposed amendments are the suggestions made by his side.

A CAPP official declined comment on the amendments process and the concerns raised by environment groups Monday, saying the organization was still reviewing the many proposed changes.

Any changes have to be accepted first by the committee, then the Senate as a whole and finally the government before being incorporated into the bill. Environment Minister Catherine McKenna has said she is open to amendments to the bill but won’t say what changes she will accept until the bill has finished its journey in the Senate. 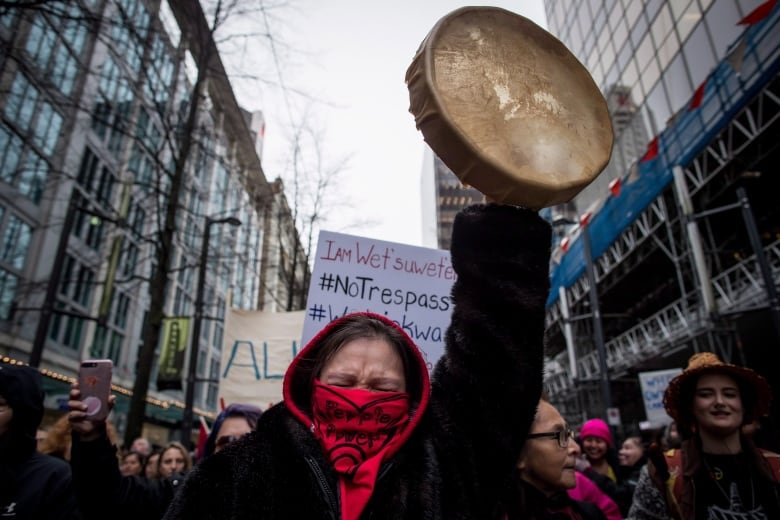 Tilly Innes, from the St’at’imc Nation, raises a drum in the air and cheers during a march in support of pipeline protesters in northwestern British Columbia. (Darryl Dyck/The Canadian Press)

Julia Levin, the climate and energy program manager at Environmental Defence, said she thinks there has been a shift in language from the government. On Friday, Prime Minister Justin Trudeau was in Edmonton, where he said he is open to making changes to the bill recommended by a “broad range of voices,” including business, Indigenous Peoples and community groups.

But he said repeatedly in that news conference that the existing system doesn’t allow big projects to get built and he wants to overcome that obstacle while still protecting the interests of the environment and Indigenous communities. 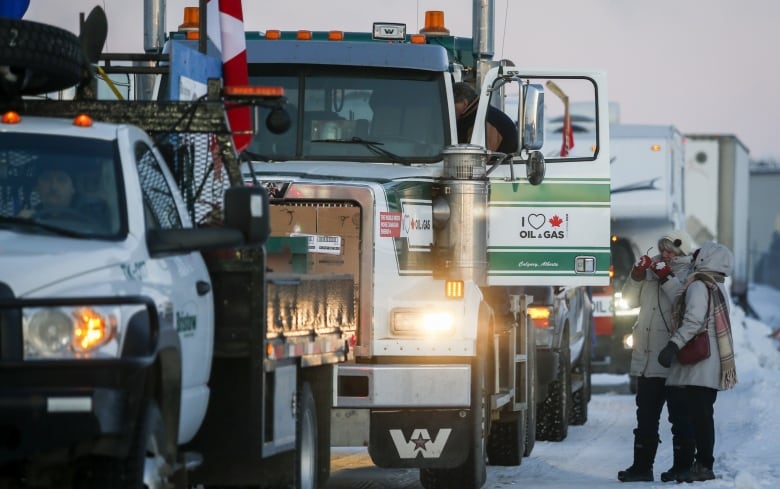 The United We Roll convoy of trucks prepares to leave Red Deer, Alta., in February. The participants were trying to draw attention to what they perceived to be a lack of support for the energy sector, and a lack of pipelines. (Jeff McIntosh/The Canadian Press)

Levin and Ginsberg both say if the Senate tries to rework the whole bill, the government would be better off to let it die and try again after this fall’s election.

“With these amendments, it won’t be better than what we have now,” said Levin.

She thinks the Senate’s major surgery is really a poorly disguised attempt to kill the bill by delaying its passage.

If the bill doesn’t get passed before the election, it will die. There are just five sitting weeks left this spring for that to happen.

Blackfish, Hail Satan? and Q&A for Life Itself Screening Virtually…