The Leftovers Edmonton Foundation is in talks with the city to replicate Leftover Calgary’s mobile market on wheels.

“You load up your mobile market and you go to … low-income housing units, seniors housing complexes, LRT stations, etc. And you set up your little grocery store there,” said Maria Mayan, a University of Alberta researcher who works with Leftovers Edmonton.

Shoppers would be able to buy bread and produce at or just above cost.

“They can get a whole schwack of good things to eat for a very low cost,” Mayan said.

Leftovers Edmonton is working out the logistics — like finding a refrigerator truck and places to park it — but is hoping to have the first market as early as next month.

The mobile market model has been successful in Calgary. Mayan said Leftovers Calgary started with four mobile markets a month, and has since expanded to 60 a month.

In addition to a possible mobile market, the organization is working with eight of the city’s food vendors to make use of the products they’d normally throw in the trash. Every week, volunteers deliver the goods to local service agencies so they can be distributed to people in need.

A report from Toronto agency Second Harvest found 58 per cent of food produced in Canada is lost or wasted, and about a third of that wasted food could be “rescued” and sent to communities in need.

Leftovers Edmonton coordinator Morgan Allen said the goal is to mobilize the community to help reduce that waste.

“That’s a huge loss not only … of a resource that we can use to feed people, but it also has a really detrimental impact on the environment by going into landfill, releasing all of those greenhouse gases,” Allen said. 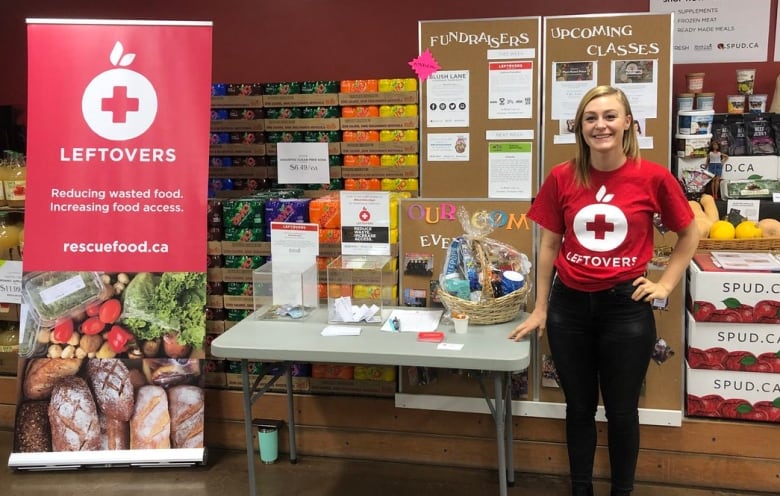 The food rescue quest started with an emergency food program for clients of the Multicultural Health Brokers, which supports newcomers to Edmonton. A University of Alberta survey found more than one third of their clients’ children were going without something to eat for a full day.

“We’re like ‘okay, well now we have this information. We can’t ignore it. What are we going to do?'” said Maria Mayan, researcher and assistant director of Women and Children’s Health at the U of A.

They started the Grocery Run program, supplying food to about 115 immigrant and refugee families each week with the help of local businesses like COBS Bread, Organic Box, Planet Organic and The Little Potato Company.

Demand quickly outgrew supply, Mayan said. Last fall, they partnered with founding organization Leftovers Calgary, which was operating a similar model, but on a city-wide scale.

“The Leftovers name helped us,” Mayan said. “It was quite well-known, so it helped us … expand out and get more donors, and then of course get more service agencies that we could actually donate to.”